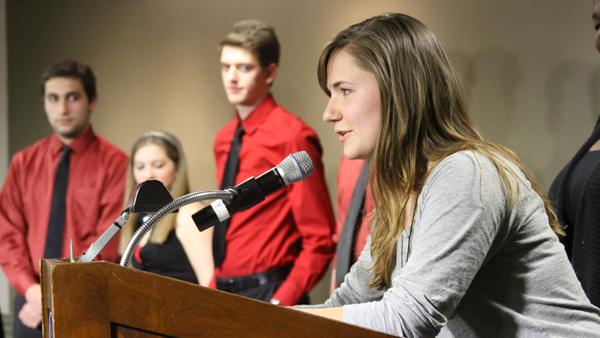 The Ithaca College Student Government Association hosted an election debate Monday, where candidates running for the senior class executive board, the SGA executive board and senators of each class and school discussed several issues, such as communication with the administration and the college’s proposed print management system.

Nearly 30 students attended the debate, which was moderated by Noreyana Fernando, assistant news editor of The Ithacan.

Justin Pyron, vice president of senate affairs, organized the debate. Pyron said this year’s debate was different from previous ones, particularly because previous debates were not held in public or open to the student body.

Less than 7 percent of the eligible student population — 245 students — voted in the last SGA elections in September 2012. Pyron said he hopes there will be a high student voter turnout at this year’s election. Voting will take place April 17–19 on IC Link.

Candidates running for the posts of senator of each class brought up concerns about the lack of communication with the administration at several points during the debate.

Jonathon Cummings, candidate for the post of senator for the Class of 2015, said he was concerned that student input was not considered in decisions such as the recent student media policy.

“A lot of things happen that students don’t hear about,” Cummings said. “My goal is to disseminate these information to the student body.”

Freshman Sean Themea, who is running for the post of senator for the Class of 2016, voiced concerns about the proposal to limit the number of pages students can print for free on campus each semester. If approved, the plan will go into effect in Fall 2013.

“We, the students, are the backbones of Ithaca College, and we deserve a say in policies and practices that our administration decides,” Themea said. “As students, it is not fair to us that we should have to choose between being sustainable or [paying] to do our homework. I pledge to mobilize the voice against the print management initiative to reevaluate the effects it has on students, as well as alternative methods to continue sustainability on campus, which is a vital issue.”

Two groups are running for the senior class executive board: Raise Your Class, headed by junior Courtney Brown, and Bomber Bunch, headed by junior Erin Smith. They discussed the importance of having large-scale events suitable for students under 21 and collaboration with career services to help seniors prepare for their next step.

Candidates from IC Students First, who are running for the Student Government Association for the 2013-14 academic year, also discussed several areas of concern, such as the lack of communication between students and the administration.

Junior Cedrick-Michael Simmons from IC Students First is running for president of the SGA.

Sophomore Isuru Perera-Somasinghe, who is running for reelection to the post of vice president of academic affairs, said he believed there were areas that had improved but said he had higher expectations.

“We need to increase the amount of meetings and creating open dialogue between us and the administration,” Somasinghe said. “Meeting and establishing solid relationships with the deans of the schools are also significantly important to this particular cause.”

Senior Chen Teng, who is currently a senator for the Class of 2013, was a member of the audience. Teng said she wished there had been more competition between candidates.

“I do wish this was more of an active race,” Teng said. “Some of the parties are going to be doing really important things, and they are not being challenged right now. That’s a little disheartening for me.”