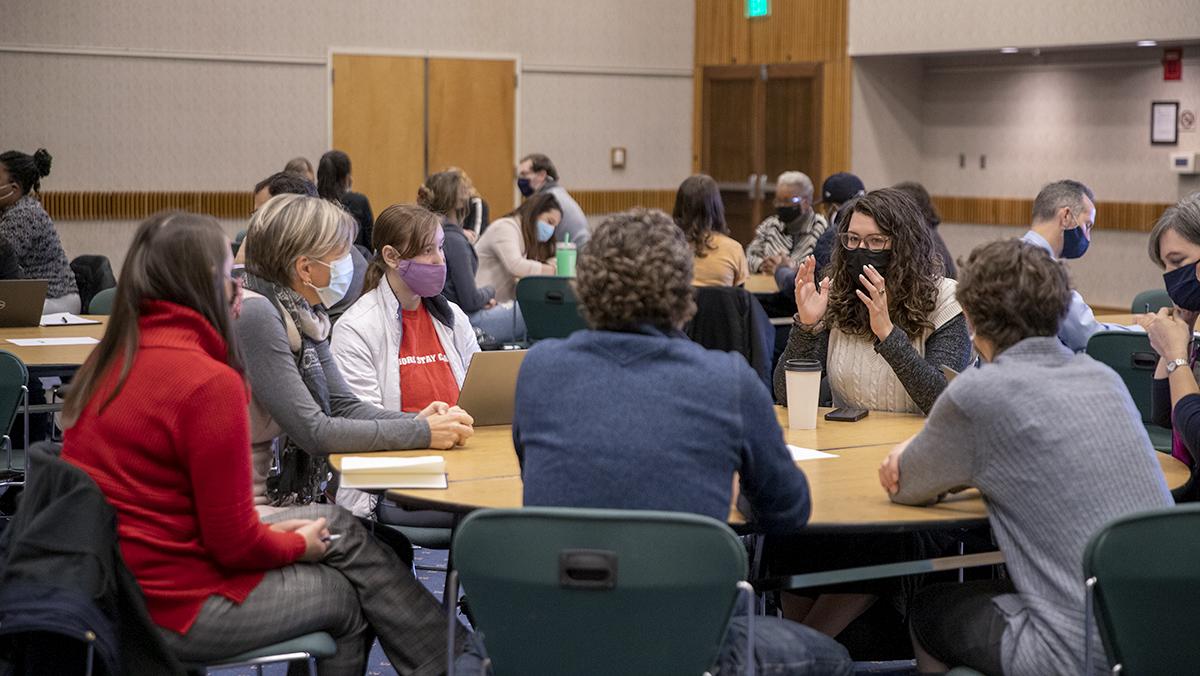 Ash Bailot/The Ithacan
The session included about 15 students, seven SLT members and seven members of the SGC divided among six tables to have small group discussions on what has gone well since returning to campus and what has not been effective. A similar event was held in January 2021 over zoom and attracted around 80 participants.
By Olivia Stanzl — Staff Writer
Published: November 17, 2021

The Ithaca College Student Governance Council (SGC) and Senior Leadership Team (SLT) held a listening session Nov. 16 in the Emerson Suites in order to give the student body an opportunity to share what its experience has been like during Fall 2021 with the college’s leaders.

The session included about 15 students, seven SLT members and seven members of the SGC divided among six tables to have small group discussions on what has gone well since returning to campus and what has not been effective. A similar event was held in January 2021 over zoom and attracted around 80 participants.

Each table had a volunteer who acted as a scribe and wrote down the discussion so the SLT and SGC leaders would be able to look back and discuss the concerns from students and how to create potential solutions.

The SLT and SGC groups intend to hold a more formal second discussion in the spring semester. A large focal point of the conversations was mental health.

Senior Kellie Swensen said students’ mental health is being affected by the current circumstances they are facing.

“I think while we are trying to get back to some sense of normality there hasn’t been enough time and space for students to grieve everything that has been lost throughout the past couple of years not only regarding COVID, but also through the APP [Academic Program Prioritization],” Swensen said.

The college is in the second phase of the APP that focuses on reorganizing and restructuring different academic areas. The first phase of the APP includes the elimination of 116 full-time equivalent (FTE) faculty and 26 majors, departments and programs. The college is currently in Phase Two of the APP, which involves restructuring academic programs, like moving the Department of Theatre Arts to the School of Music.

A lack of therapists in the Center for Counseling and Psychiatric Services has left students waiting weeks at a time for their issues to be addressed, according to students at the listening session. CAPS consists of a team of licensed and license-eligible professionals who promote and foster mental health, emotional well-being and a sense of belonging, according to its webpage.

CAPS currently employs nine clinical staff members. Counselors are full-time licensed or license-eligible psychologists, social workers and mental health professionals, and they adhere to the requirements of New York State law and the ethics and professional guidelines of their respective disciplines.

The issue with a short-staffed CAPS is not new to the college. In 2015, students launched the Get CAPS Ready campaign with the hopes to get the funds for an increase in the CAPS staff. In 2019, the college implemented a 24-hour call service, hired a new director and had 11 staff members.

CAPS developed a program called “Let’s Talk” in 2019 which is  a drop-in service that offers informal, confidential consultations with a CAPS counselor at locations around campus, according to the CAPS webpage. The program is currently virtual via phone call or Zoom.

Senior Julia Machlin said this also impacts professors, who act as a support system for their students.

“I know my professors aren’t being paid to be therapists, they have so many other jobs that they are doing,” Machlin said. “ … A lot of faculty members are taking on more in their classes while doing their research and trying to get out their publications.”

Mary Holland-Bavis, associate director of student involvement in the Office for Student Engagement, said she hopes to implement events in Spring 2022 where students will be able to learn strategies to alleviate the stress that comes with being a college student.

“It’s important to think of how other faculty and staff can help alleviate this burden that’s on students, it doesn’t just have to be on CAPS to be able to help,” Holland-Bavis said. “I think other people can step in.”

Junior Deontae Guy, SGC president until his resignation becomes effective Nov. 29, said it is beneficial for all offices on campus to play a part in helping students.

“That way we are helping different communities,” Guy said. “I think it will be more helpful if we all share the workload.”

Attendance policies were also a concern brought up by the students at the listening session.

“I feel like there have been statements of ‘Oh, we care about your mental health,’ but they have not been reflected in the actual structure of classes,” Swensen said. “And there are also problems getting accommodations through SAS.”

Student Accessibility Services (SAS) works to facilitate access for students with disabilities at the college. Through the interactive process, SAS works in partnership with IC students, faculty and staff to develop and implement accommodation plans, according to their webpage.

Cornish said she hopes to make the listening sessions a monthly event with alternating meeting times in order to allow all students to be able to attend and to make sure everyone’s voice is being consistently heard.

“I’ve heard you and I’m going to act on what I’ve heard,” Cornish said at the end of the meeting.