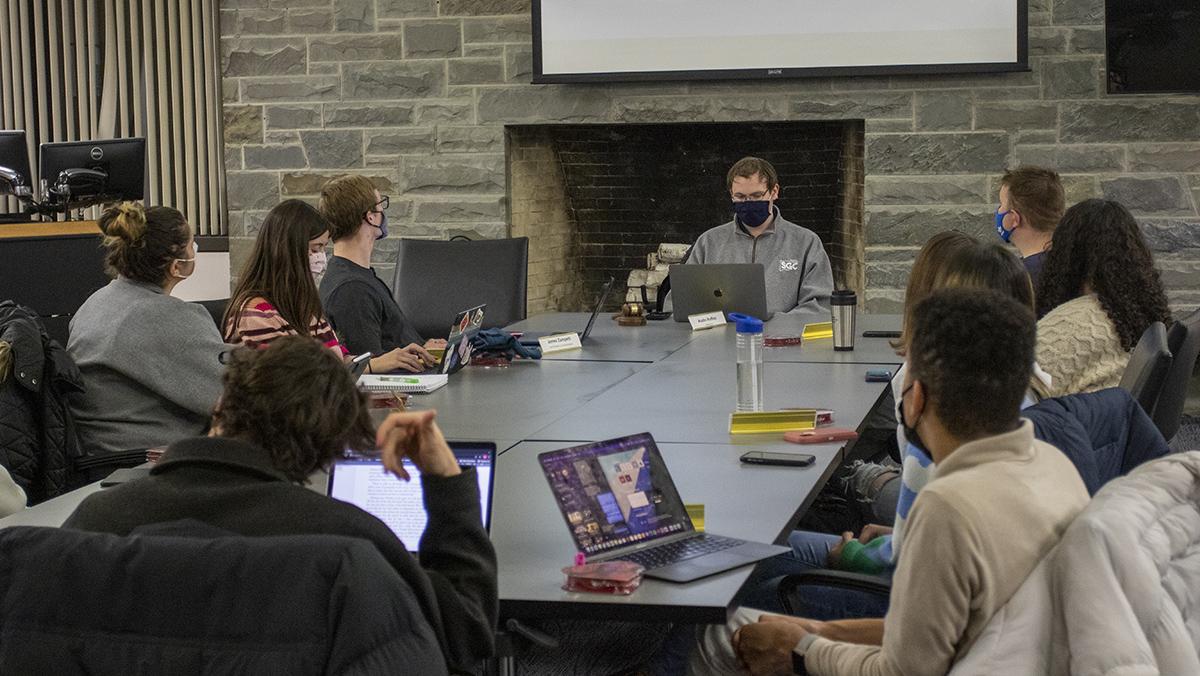 The SGC approved two new members of the council: junior Harley Grossman as senator for the School of Humanities and Sciences and junior Himadri Seth as the international senator. Junior Lila Weiser also began as the new chief of staff after being appointed Jan. 31. Previously she held the position of senator-at-large.

On Feb. 4, Swarts announced the shift to Green: Lower Risk operating status which indicates current cases of COVID-19 are infrequent and there is low risk of transmission on campus. Swarts explained that the campus will operate business as usual but if there is an uptick in COVID-19 cases, the Green: Lower Risk operating status could be changed. As of Feb. 15, there are 11 total active student cases.

Swarts said there was a text campaign that was sent out to students who had not submitted their vaccine boosters, which were due Feb. 15.

“Currently, where we are at, at the end of today, with the numbers we received, we are doing really, really good,” Swarts said. “We actually had over 500 submissions over the weekend. So that’s fantastic news.”

Swarts said the college is working with Diana Dimitrova, director of International Student and Scholar Services, to help international students who have been unable to get the booster.

Another student asked if it was possible to create a booster clinic for Ithaca College students.

“We actually did do something like this back in the fall, specifically for international students,” Swarts said. “Unfortunately it wasn’t a huge success, we only had around five students who took advantage of it.”

Swarts said the Health Department told them that unless they had more numbers next time around, they wouldn’t be able to help the college further. The Hammond Health Center is also not licensed to administer the vaccines.

“Will there be any increase in enforcing masks?” Richardson said. “Some people are associating us being within zone green as in it being a mask-free area.”

Swarts said the mask policy will be the same as last semester despite the low cases on campus and New York Gov. Kathy Hochul dropping the mask mandate for New York state Feb. 10.

“It is up to all of us to make sure that we are holding each other accountable,” Swarts said. “Tompkins County is still considered a high transmission area … and our county still has a masking advisory… IC will continue to follow that guidance as long as it is still there.”

The SGC also asked Swarts what the college’s plan for surveillance testing is going to be throughout Spring 2022.

Swarts said there will be the same surveillance testing as Fall 2021 with around 300 students, faculty and staff chosen randomly to voluntarily test weekly. Anyone with religious or medical exemptions from the vaccine will be required to test weekly as they have been. Testing bins have been limited to Emerson Suites and the Peggy Ryan Williams Center.

Freshman Vincent Tavernese, School of Music senator, asked about availability of testing and if Emerson Hall was going to be a quarantine housing site in Fall 2022. He also asked what the return plan after spring break will look like.

Swarts maintained that while any individual does have the ability to test, the focus should be on individuals who are symptomatic.

“We are finalizing what the fall will look like, our plan is to give back Emerson Hall,” Swarts said. “As we know with the pandemic, things change very rapidly, so I think it is a little too soon to say what is and what isn’t going to happen as a definite.”

Swarts said the college will announce the procedure for returning to campus after spring break soon.

Weiser said there are student concerns with the reports of COVID-19 case numbers not being accurate because the school is mainly testing people who are symptomatic and many new cases are largely asymptomatic.

Swarts said he will consider the suggestion and that he appreciates the feedback.

Weiser voiced another concern in regard to students not following the college’s COVID-19 guidelines. Weiser said students who have raised this concern often do not know about the reporting form where campus members can report others for not following mandates.

“I will definitely look into it and see how we can incorporate that into future communications out to the student body,” Swarts said.

Later in the meeting, both Grossman and Seth pitched their respective platforms during confirmations and were later confirmed 5–0–0 votes after deliberations. The two candidates ran for different positions without competition.