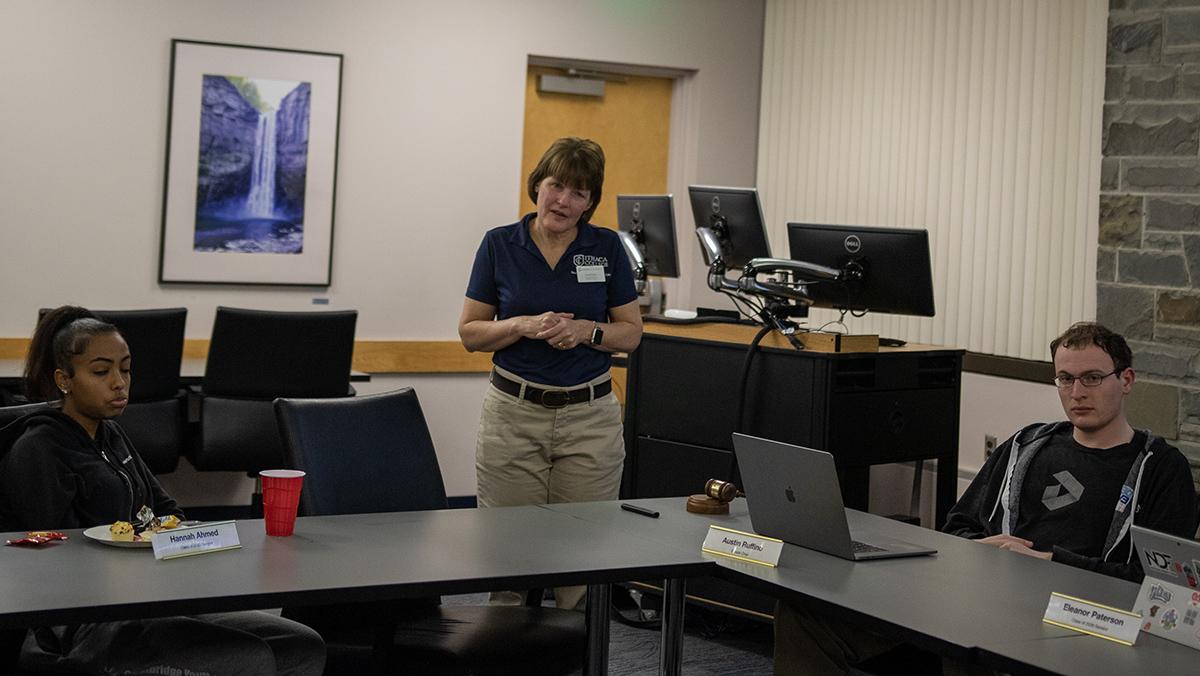 Prunty announced to the senate that the substation road, which runs from Boothroyd Hall to Terrace Dining Hall, will be permanently closed off beginning Spring 2023, once the materials for fencing arrive to campus and are installed. The road has been part of the college’s campus for decades as a means for vehicles to access the electrical substation and for emergency vehicles to drive around campus quickly.

“Have you noticed the fact that the guardrails along the right side of the road are kind of falling off the whole side?” Prunty said. “The hillside is crumbling; there’s only 10 feet of space between the metal fencing that’s around the substation itself and the side where the guardrails are. There’s a number of safety concerns about that area.”

With the substation road to be fenced off, students, faculty, staff and others will have to travel across campus using the roads and walkways that lead to the set of stairs between the Ithaca College Library and the Towers residential buildings.

Senior Maya Scriven, senator-at-large, told Prunty that students, including herself, have noticed inadequate lighting on the stairs behind the Towers, which she said should be addressed if it becomes the only path from lower campus to the Towers and Terraces residence halls.

“I think because there’s going to be more people using the stairs now, more people are going to be finding out that the lighting doesn’t really work when you go on those stairs,” Scriven said. “I take my flashlight out on my phone to get up and down because I can’t see the stairwell.”

In December 2021, the SGC presented a bill: Increasing Campus Lighting, recognizing that many outdoor walkways on campus have insufficient lighting. The bill’s sponsors drew attention to the Circle Apartments parking lot, substation road, the walking trail behind Emerson Suites and the walkway from Butterfield Stadium to L-Lot by Terraces. As of March 2, the bill resulted in more than 80 light fixtures repaired or replaced across campus by the Office of Facilities.

Members of the SGC asked Prunty further questions about future plans for the service road, like paving a new path for people to still walk or run around the campus. Senior Grace Madeya, president of the student body, and junior Utkarsh Maini, School of Business senator, along with other members of the council asked about the potential for late-night transportation options that go through the college’s campus.

Prunty said the college does not currently have transportation services on campus, like a shuttle from campus to The Commons or between the main campus and Circle Apartments, because of two main factors. She said one reason is that Tompkins Consolidated Area Transit (TCAT) services are limited overall in the Ithaca area because of a shortage of drivers. The second reason Prunty said was that the college has made multiple efforts in the past with pilot programs to bring students back and forth from Circle Apartments to campus, but it fails every time because of low ridership. The college found that more students would rather walk or get a ride from a friend than wait for a shuttle.

Senior Lila Weiser, chief of staff, asked Prunty for updates and her comments on the swastikas that have been found around campus in the past several weeks. Prunty said she is upset by the recent vandalism as it impacts student life, making students feel targeted and unsafe on campus, where they spend the majority of their time.

“It’s incredibly distressing and disappointing to believe that we have community members who are engaging in creating hate symbols around our campus,” Prunty said. “We are starting to talk about … some education that we might be able to provide to the campus. What can we do that we can make sure all students participate in, that all faculty and staff participate in?”

During senator reports, first-year student Nicole Sutera, School of Music, Theatre and Dance senator, said she is working with Reginald Briggs, associate director of Dining Services, to establish a program on campus similar to the Too Good To Go app. Too Good To Go is an app that allows customers to buy food from restaurants at the end of the day at a fraction of the price to decrease food waste for restaurants and food insecurity for people. Sutera is hoping to create a program at the college that partners with retail dining services in the Food Court at IC Square, Towers Marketplace and possibly the Campus Center and Terrace Dining Halls.

“These marketplaces would be open past dining hall hours for people to pick up food,” Sutera said. “That’s the goal, anyway. I’m really excited about it because we’ve had a meeting about it and now we’re moving into our second step.”