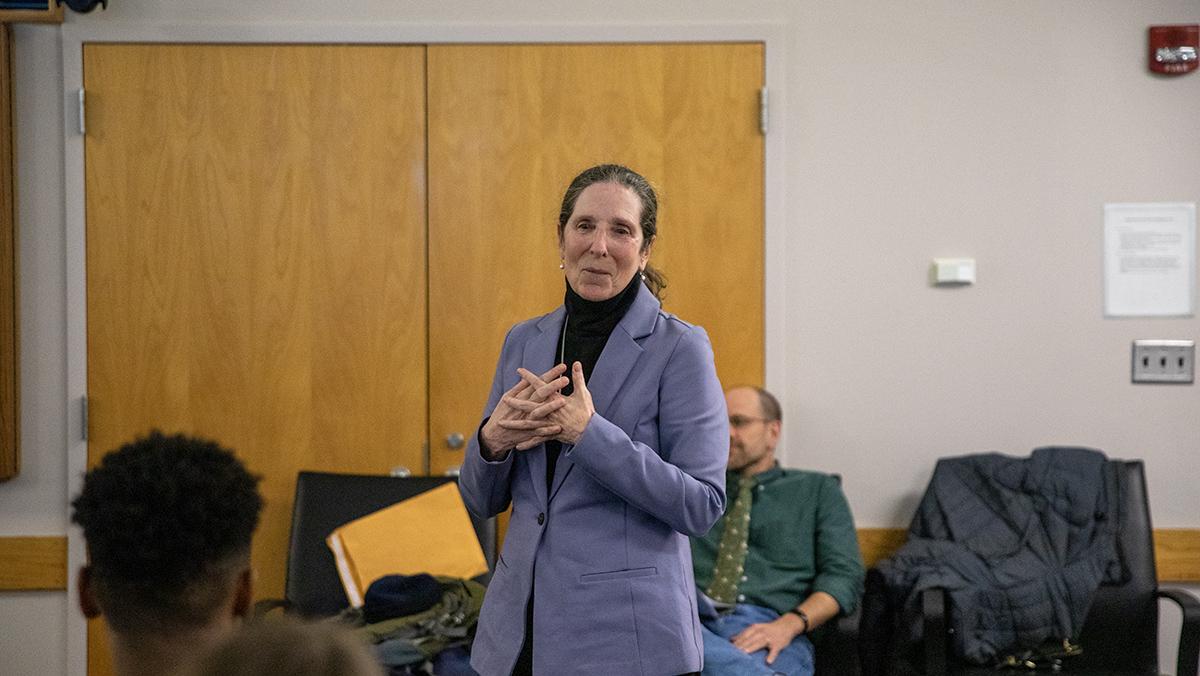 For its last meeting of the semester, the Ithaca College Student Governance Council (SGC) spoke with Ellen Staurowsky, professor in the Department of Media Arts, Science and Studies, and Thomas Pfaff, professor and chair of the Department of Mathematics, about the college’s scheduling grid.

“It came as a little bit of a surprise to me that there hasn’t been a discussion yet with SGC,” Staurowsky said. “I hope that we can have conversations around how students are thinking about the grid, what issues are most concerning to [students and] to make sure that what we’re doing is something that’s going to be supported every possible way.”

Pfaff said he and Staurowsky are not on the committee for the new scheduling grid and referred to his position on the matter as a freelancer. He said the current program that classes are scheduled by is largely designed for three-credit classes, but the school needs to compensate more for four-credit classes.

“In my mind, the main [reason] for moving to a different grid is largely [that] we have to accommodate more four-credit classes because the current grid does not accommodate it,” Pfaff said. “A lot of classes already don’t use the current schedule grid; they’re considered off-grid.”

Pfaff said that among the faculty that have been discussing the grid, the goal is to have as many courses following the grid as possible, but there will always be classes that do not fit perfectly into the schedule. Pfaff said the committee is hoping to keep classes running within the 8 a.m. to 4 p.m. timeframe to accommodate student athletes’ sports schedules.

Pfaff said that when the new grid schedule is in place in Fall 2024, it will not impact the courses students have already taken. He said that whatever was stated in the course catalog when a student enrolled in a major at the college is permanent; Students would not need to retake a course if it changed from three credits to four credits.

“This will be a fairly big change — colleges don’t change their grid very often,” Pfaff said. “It’s not something you [do] every couple of years. … It’s something that stays set.”

When Pfaff and Staurowsky opened the floor to questions from the council, sophomore Hannah Ahmed, Class of 2025 senator, made a suggestion regarding how the college should inform the student body of the changes being made.

“We’re talking about 2024 and that’s my senior year. I’m going to be so far into my major and everything that’s already going on. … Now I have to worry about a whole new grid coming into my last year,” Ahmed said. “It’s really how you deliver it to students. … People may not want to admit that they need step-by-step instructions, but we need step-by-step instructions!”

First-year student Nicole Sutera, School of Music, Theatre, and Dance senator, advocated for her peers in the Center for Music who have off-grid schedules every semester. Sutera is pursuing a Bachelor of Arts in music with an outside field in psychology and said she is enrolled in 11 courses next semester, which will only total about 16 credits because music classes are varying in credit numbers and often have fewer credits than other classes.

“One problem that I run into is that a lot of the psych courses that were offered were overlapping with Whalen courses because the Whalen courses are just in their own little bubble,” Sutera said. “I feel like this schedule can be really useful for me and all the other BMO students and music students that want to take classes outside of the music school.”

Senior Maya Scriven, vice president of communications, asked if the grid committee anticipates an increase in credit overload forms if there are more credits per course. Three-credit courses can fit into the 18-credit limit more easily than four-credit courses can.

“Hitting 18 is going to be harder without going over,” Pfaff said. “I have not heard any discussions from administration on what they could do in those cases.”

Before leaving the meeting, Staurowsky and Pfaff said they appreciated hearing from the SGC and found the conversation between them and the council to be valuable.

“It was interesting to hear your questions,” Pfaff said. “Your questions tell me that there [are] problems that can be resolved. I encourage you to push with the administration, get them in here and talk to them more. That’s how problems get solved and things get better.”

During senator reports, first-year student Eleanor Paterson, Class of 2026 senator, said one of her major goals for the upcoming semester as a member of the campus affairs committee is to add more water bottle-filling stations around campus.

“I feel like there [are] not enough places to get your drinking water,” Paterson said. “As college students, that barrier of making the decision to drink water is already high enough.”

The meeting concluded with senior Grace Madeya, president of the student body, presenting an end-of-semester check-in form for the senators and board members to fill out and submit. Madeya said the form was anonymous and an opportunity for senators to express how they think the executive board could improve. For the executive board, the form is available for them to express how they think Madeya can improve in her position.