Speak out held for abortion rights 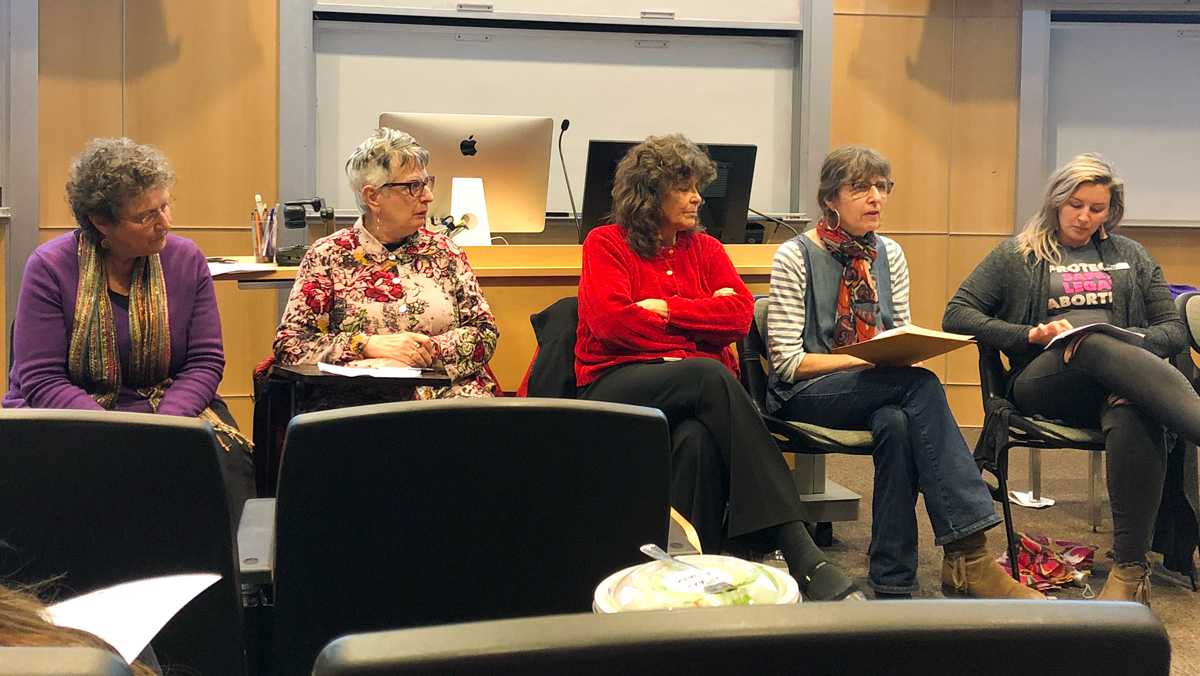 Ithaca College Planned Parenthood Generation Action hosted an event titled Roe V. Wade: Abortion Speak Out Oct. 23 to emphasize the importance of the landmark Supreme Court case Roe v. Wade (1973) during a time when many worry the right to abortion and other reproductive rights for women may be under threat.

Sue Perlgut and Nancy Miller, two members of Eliminating Abortion Stigma (EAS), a local group that speaks out about the importance of legal and safe abortions, spoke about their experiences considering and/or going through with getting abortions. Both women referred to experiences that occurred before the Roe v. Wade case — in which the Supreme Court made abortion legal throughout the United States. Additionally, Joyce Leslie, Joan Adler and Ashleigh McGuire, staff members at Planned Parenthood of the Southern Finger Lakes, spoke at the event, which was held in Textor Hall, Room 102. Approximately 30 students were in attendance.

Senior Tatiana Jorio, president of Planned Parenthood Generation Action at the college, said the event was held to bring awareness to how impactful the Roe v. Wade decision was for women’s reproductive health rights. She said it was important to have women tell their stories about having abortions before it was legal and that women would be greatly affected if the ruling was overturned.

“It’s basically to say that we’re here, and we’re not going to give up,” Jorio said.

Americans are worried about the status of the Roe v. Wade decision because President Donald Trump has been vocal about his pro-life stance and promised to put pro-life justices on the Supreme Court in order to get the case overturned.

A series of emails were released from 2003 written by Justice Brett Kavanaugh, the newest justice appointed to the Supreme Court, when he was a White House lawyer under the Bush administration. In the emails he said not refer to the Roe v. Wade decision as the “settled law of the land,” because the Supreme Court could always “overrule its precedent” was released Sept. 6.

Kavanaugh said in a September hearing before the U.S. Senate Judiciary Committee that Roe v. Wade is a “settled precedent” but did not affirm whether or not he would overturn it given the chance.

Perlgut said EAS was formed in 2015 because the members wanted to speak out and advocate for Roe v. Wade to be upheld. This is because many women in the group themselves had to go through gruesome processes to get abortions before it was legal.

Perlgut said at the event that she was lucky to have survived her abortion procedure after she had graduated from college in 1965. She said she could not afford contraceptives.

“I was in my early 20s, and as a single woman, I didn’t have access to contraceptives,” Perlgut said. “I found myself pregnant. Abortion was my only option.”

She said she found a doctor in New York City to perform the procedure. It cost her $700, which was one–third of her salary at that time. Perlgut said she did not have adequate anesthetics so she awoke screaming in the middle of the procedure.

“I wake up to loud screams, and realized they were mine,” Perlgut said. “The doctor yells, ‘My neighbors!,’ slaps me, and I’m out again.”

Perlgut said, as a result of her experiences, she felt compelled to advocate for women’s reproductive rights to have an abortion.

“No woman should have to have an illegal abortion that may not be safe,” Perlgut said. “No man should decide that for us.”

Miller, a member of EAS and a nurse, told her own story of struggling to decide whether to get an abortion or to give her child to adoption services. She also spoke about other stories of women struggling through this decision who she met as a nurse.

She said she found out she was pregnant in September 1969 after moving to Boston when she had finished college. She said she could not bring herself to get an abortion because it was illegal at the time.

“I knew I had to take care of this myself and would not go back to my family with my tail between my legs, so I carried my pregnancy, gave birth to a baby girl, and surrendered her for adoption,” Miller said. “That would be easier than doing something illegal, right?”

She said she spent many years wondering about her daughter, Jessica, and finally met her when Jessica was 23. Miller said she has talked to women who have both received abortions and surrendered children for adoption, and in her experience, many say adoption is by far more difficult. She said there is no easy way out of an unwanted pregnancy.

“When a pregnancy is unplanned and undesired, no option is ideal or easy,” Miller said.

The Reproductive Health Act — a bill that would ensure women in New York have access to abortions if Roe v. Wade is overturned — has been introduced to the New York state legislature multiple times but has not been passed. The RHA would decriminalize abortion and create a new section of the Public Health Law that would legally allow doctors to perform abortions on patients who are less than 24 weeks pregnant or if there is a risk to the fetus or patient’s health.

Leslie, as a member of EAS, emphasized the importance of voting for politicians who support the RHA.

Freshman Lauren Obusek said she attended the event because she is involved in multiple clubs — including IC Generation Action and Feminists United at the college — that focus on women’s rights and wants to show how much she cares about important topics like abortion rights.

“I think it’s important, especially now in our political climate, to show your support and make a change,” Obusek said.

Freshman Julia Ganbarg said she wants to show solidarity with women who have had abortions and wants to help remove the stigma around it.

“I think it’s really to support women who you know, who you don’t know, no matter what, and I think it’s really important to end the stigma around abortion,” Ganbarg said. “Abortion isn’t a bad word. It’s not anything to be ashamed of, and we need to make it more normalized.”