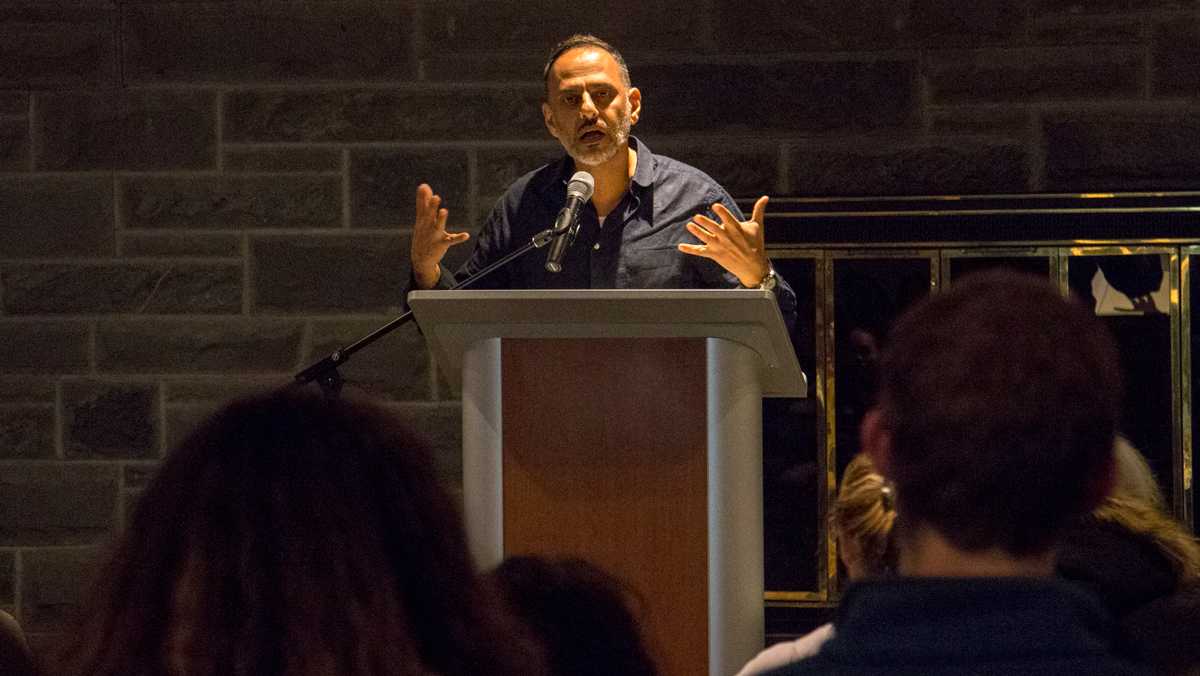 Julia Cherruault/The Ithacan
Moustafa Bayoumi, associate professor of English at Brooklyn College and author of “How Does It Feel to Be a Problem? Being Young and Arab in America,” spoke on March 27.
By Brontë Cook — Staff Writer
Published: March 28, 2018

Moustafa Bayoumi, associate professor of English at Brooklyn College and author of “How Does It Feel to Be a Problem? Being Young and Arab in America,” highlighted the present–day implications of 9/11 on Arab youth during his presentation at Ithaca College on March 27.

The presentation was part of the college’s annual Symposium on Inclusion, Cultural Fluency and Global Citizenship and drew an audience of approximately 50 people. The symposium was co-sponsored by the minor in Muslim cultures, the Center for Faculty Excellence, the Office of the Associate Provost for Diversity, Inclusion and Engagement and the Office of International Programs and Extended Studies.

Published in 2009, “How Does It Feel to Be a Problem? Being Young and Arab in America” illustrates the experiences of several Arab-American youths in Brooklyn as they navigate life amongst discrimination in post–9/11 American society. The novel was awarded a 2008 American Book Award and the 2009 Arab American Book Award for Non-Fiction.

Jason Freitag, associate professor in the Department of History, said the novel highlights values the symposium aims to address.

“Inclusion, fluency, citizenship, connection — these are words that ring for us in this text as he makes the experiences of these people so accessible to us as readers,” he said. “The humanity in these stories awakens a sense of shared responsibility and hope.”

During the presentation, Bayoumi emphasized how negative perceptions of Muslim and Arab individuals throughout the United States have escalated since the terrorist attack in 2001. Bayoumi said that in the last two decades, the country has adopted discriminatory attitudes that are detrimental to members of Islam and Arab communities.

Bayoumi also discussed the modern relevance of his novel given the current political environment. He said while he believes the results of the 2016 presidential election encouraged the vocalization of anti-Muslim sentiments, negative attitudes toward the religion have been increasing throughout the last few decades.

“There was Islamophobic practice already happening in the country that unfairly stigmatized the Muslim community with a brush of suspicion,” he said. “What Trump did during the election was that he spoke out loud the Islamophobia that was already in practice — and it got him votes.”

Bayoumi said that to combat these harmful stigmas and stereotypes, everyone must work within their own communities to inspire empathy and change.

“We’re heading backwards,” he said. “I don’t have faith that the government can do the right thing for us as a nation — I have more faith that maybe we could do it together.”

Bayoumi said the lack of existing efforts to combat this damaging stereotype sparked his initial desire to publish a novel focusing on the lives of Arab-Americans.

“I was looking around me and seeing what was happening — the kinds of suspicions, the kinds of horrors and terrors that were really present in the community,” he said. “I wanted to find a way of countering this growing hostility, this progressive dehumanization that I was seeing all around me. I thought, ‘You know what the best way to do that would be? To tell stories.’”

Bayoumi said he decided to focus on the stories of young Arab-Muslim Americans specifically because he wanted to illustrate the effects of 9/11 on developing identities. A few of the narratives highlighted within the novel include the efforts of a high schooler to sue her school on the basis of religious discrimination, and a family who spent three months in a detention facility because of unreasonable suspicions of terrorism.

Junior Laura Waxman said the event opened her eyes to the reality of discrimination against Arab-Muslim individuals.

“I actually have the book and just haven’t gotten a chance to read it yet, but I loved this event,” she said. “I learned a lot about the Arab-American experience, and I can’t wait to read more about it.”

This year marks the 10th anniversary of the 9/11 attacks — a nightmare that continues to haunt our country. Unfortunately, while we mourn the victims of 9/11 without question, our selective eulogizing, which has since then proliferated, silences countless Iraqi and Afghan civilians who endured an unconscionable degree of anguish throughout the past decade.

In the past four days, thousands have taken to the streets across the Middle East and North Africa to join in the protests against an anti-Islamic film as well as the country in which it was produced, the United States. This film, which was produced in the US by extreme anti-Islamic groups, was released on…

Anti-Islam embassy attacks and its potential effect on US diplomacy