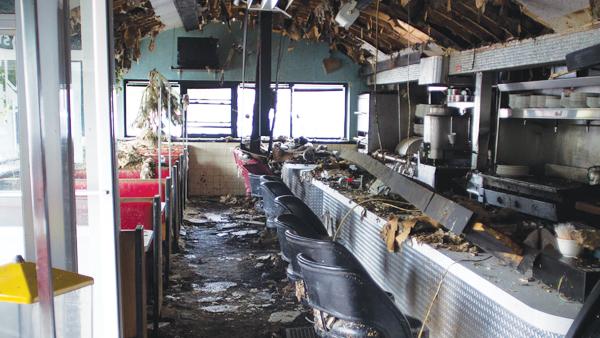 After a destructive fire inside the State Diner, the owners are trying to rebuild from the ashes with the support of the Ithaca community.

The fire, which occurred at 4:30 p.m. Oct. 2, was caused by an electrical malfunction, according to the Ithaca Fire Department. At this point, the Stravropoulos family which owns the diner, is unsure when the diner will reopen.

The only external signifiers of the fire are the yellow caution tape tied across the front of the building and the white notice taped to the diner’s front door, warning others that the building is not safe to enter. From the street, the building’s structure appears to be unharmed.

Repairs have begun on the diner, and the owners are planning to replace the electrical wiring by the end of the week, Stavros Stravropoulos, son of the owner, said.

The State Diner has been a 24-hour destination for students and locals for more than 70 years. Patrons would perch on the black stools along the white counter and on the red booths with fold-out stadium seats, which looked out into the bustling street. The diner’s fare has brought students, city workers and the elderly to the diner with their late-night options, like classic milkshakes and early-bird specials.

Mike Rich originally opened the State Diner in 1936 as a trailer-car diner before selling it to businessman Dino Papadopoulos. From there, the diner switched hands once more in 1981 when the Stravopoulos family purchased the diner.

On the day of the incident, Stavros said he had only stepped out of the diner momentarily when the fire broke out.

“I left around four o’clock,” Stavros said. “I went to my house to grab a couple things, and by the time I’m finished grabbing my things, my phone’s going off, you know, ‘Diner’s on fire, diner’s on fire.’”

Georgia Stravopoulos, the diner owner’s daughter, said she was out of town when the fire occurred, but she hurried back after she heard.

“I was traveling an hour away,” Georgia said. “I heard about it about a minute after it happened. I flew back. I saw no stop signs or red lights. I don’t know how I got back here.”

Through the windows, the furniture is visibly stacked along the walls, and industrial white buckets rest on counters and tabletops among thick black cables.

Ithaca College sophomore Victoria Weinberg, who first visited the restaurant as a freshman, said the diner had a friendly environment.

“I got some good vibes from [the diner],” Weinberg said. “It was very homey and cute.”

The owners are currently in contact with an architect to figure out how much it is going to cost to repair the building. Stavros said there is no way to know how long reconstruction will take because they have to confer with the city, the insurance company and the architect to plan the repairs.

“As far as I know, it’s still too early in the process to solve,” Stavros said.

The Stavropoulos family has seen a tremendous outpouring of support from the community. Stavros said regulars stop by every day to ask about how the repairs are progressing, and others have offered their condolences to the owners through phone calls and Facebook messages.

“They’ve been very welcoming,” Stavros said. “It’s very nice to see that the diner and the family mean a lot to the city and the community.”

“We don’t eat late at night anymore at a diner,” Keenan said. “The fact that it’s [open] 24 hours is what brought me to it in the very beginning, and we have yet to go there during regular [daytime] hours.”

Georgia said some students have visited the diner after the fire hoping to buy a meal.

“Two weeks ago, sitting out here, a couple of IC students were coming in to eat,” Georgia said. “They’re having fun, crossing the street, not paying any attention, can’t see the yellow rope on that end of the street. They asked, ‘Is it closed?’ And I’m like, ‘We’re closed!’ They were like, ‘Oh shit!’ And went about their business. I wonder where everyone is going for breakfast now.”

Sophomore Karen Rich was disheartened when she heard about the fire. For her it was small details like the stadium-like chairs that made the diner a great place to hang out. Like Weinberg, Rich first visited the diner as a freshman.

“Its such a shame since so many people enjoyed great meals there,” Rich said. “I hope their efforts to rebuild are successful, and I can’t wait to have another delicious meal sitting in those comfortable, unique chairs.”

The Fine Line Bistro, Kitchen Theatre and T-Shirt Express will be sponsoring the “Resurrect the State Diner Halloween Bash” at Chanticleer, a bar on The Commons, on Oct. 31 that will collect a $3 cover charge as donations from patrons to benefit the State Diner’s employees. So far, more than 100 people have signed up to attend the event on Facebook.

Stephen Nunley, managing director of the Kitchen Theatre on The Commons, said he witnessed the incident and said he couldn’t believe the diner was on fire. He said it’s important for local businesses to support each other.

“The State Diner has been around for a long time; it’s a landmark,” Nunley said. “A lot of people were just shocked that a landmark business would be affected so greatly.”

The diner’s local competitor said the fire was unfortunate. Albert Smith, owner of the 24-hour Shortstop Deli, said he has seen a slight increase in late night clientele since the State Diner fire, but he would like to see the diner reopen.

“We look forward to them coming back,” Smith said. “Their staff will oftentimes come here on their way home to get a soda or something, or on their way into work. They’ve been a good neighbor forever; the owners worked very hard to build their business, and it’s an Ithaca landmark. I wish them all the luck in getting it back open.”

Tom Stravopoulos, owner of the State Diner, said the diner has become an integral part of his life, and that he spends most of his waking hours — 15 hours a day — at the diner.

“We made this home outside of our home,” Tom said.” It’s our home away from home.”