Strategic plans outlines goals for IC over next five years 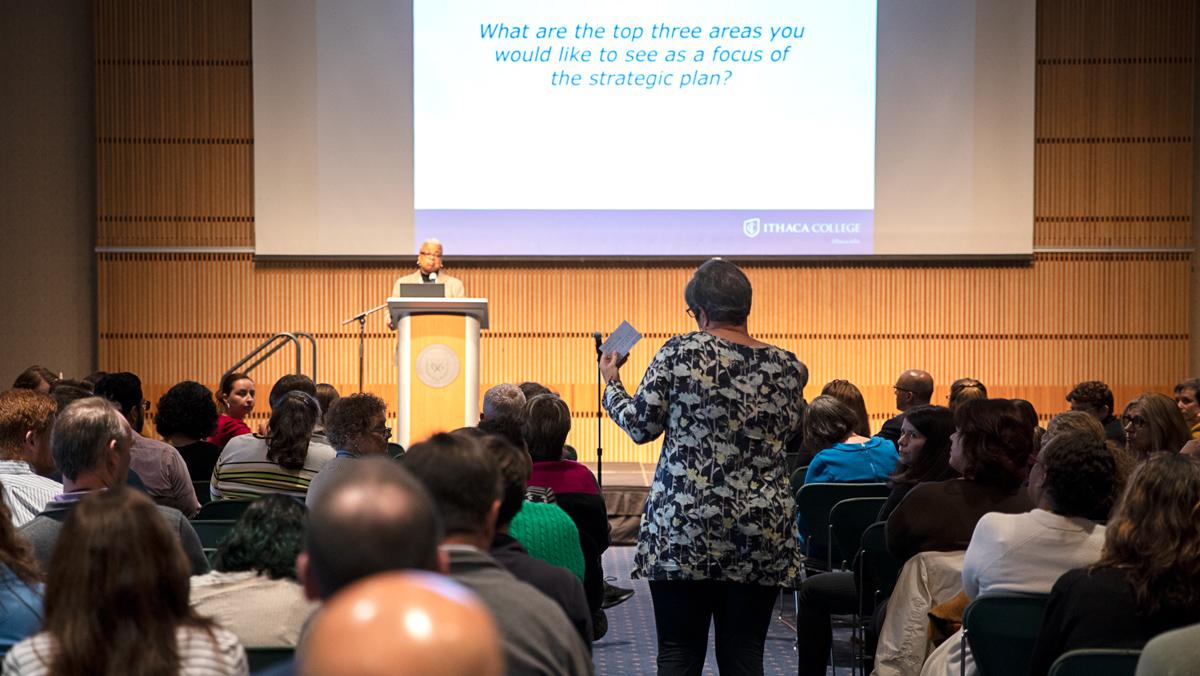 After approximately a year of planning, committee meetings and working groups, Ithaca College’s five–year strategic plan — called Imagining Ithaca — was released to the campus community in June. The 36-page document outlines the college’s plans for investing in college employees, building off-campus relations and increasing the endowment and revenue streams while lowering the cost of attendance.

The plan was released over the summer and was unanimously approved by the Ithaca College Board of Trustees at its June 2019 retreat. Over the course of two semesters, beginning in September 2018, the steering committee — led by co-chairs La Jerne Cornish, provost and senior vice president for academic affairs, and Jason Freitag, associate professor in the Department of History — held forums and meetings to find out what the campus community wanted to see improved at the college.

The plan lists nine goals: becoming a model for student success; becoming a year-round campus; supporting interdisciplinary studies; cultivating cross-sector and community partnerships; becoming a model for colleges committed to diversity, equity and inclusion; maintaining a sustainable size of programs; becoming an employer of choice; advancing the Campus Master Plan; and increasing alumni engagement. The plan lists objectives alongside every goal, but the specific steps that will be taken to complete these goals will be provided in the next part of the process — called Ithaca Forever — in Fall 2019.

David Perlmutter, professor and dean of the College of Media and Communication at Texas Tech University and author of the “Admin 101” column in the Chronicle of Higher Education, said strategic plans vary among colleges and universities.

“Some strategic plans are very detailed, and they will say, ‘We want to raise a billion dollars in our next campaign,’ and that’s a goal that everybody works towards, and there’s a tremendous focus on that,” he said. “Sometimes, the goals of strategic planning are general and it’s hard to attach a metric to it, like saying, ‘We want to enrich the undergraduate experience.’ It’s hard to put a weight to that saying, ‘Okay, we’ve done it.’”

Members of the campus community participated in the process, including taking part in the process design team, steering committee and work groups. In total, 47 staff members, 27 faculty members and 11 students, along with two members of the board of trustees and one college affiliate, worked on the project.

Paula Ioanide, associate professor in the Center for the Study of Culture, Race and Ethnicity, was a co-chair for the interconnections among disciplines, schools and partners working group. She said she thought the strategic planning process was successful at finding out what the community wants. She said the working groups had enough time to get all the information they needed from the community and that spending any more time would have been unnecessary.

“I definitely think we reached saturation because as we kept engaging different entities, organizations, people within the IC community and alums, we kept seeing the same issues being raised,” Ioanide said.

Perlmutter said colleges often take approximately a full academic year to craft a strategic plan from conception to the final release of the plan. Freitag said the three semesters the college took to come up with the plan motivated the committee to move quickly in accordance with the changing landscape of higher education.

“That timeframe was fast, and it was tight, and it was intense, but we’re very happy with what we got done and think we did a good job,” Freitag said.

“The planning occurs in the first five years — getting ready for stuff that will occur later,” Freitag said. “There are things that we can’t accomplish in five years, but that doesn’t mean the framework and the foundation can’t be done in that first period for things with longer–term benefits for the campus.”

According to the strategic plan, an implementation design team met over the summer to discuss who is responsible for implementation, what the timeline will be and how developments will be communicated to the campus community. These implementation ideas, including the cost of implementation and methods of accountability, will be presented to the board of trustees at its October 2019 meeting. Freitag and Cornish are both on the implementation team, as well as Bill Guerrero, vice president of the Division of Finance and Administration; Hayley Harris, vice president of the Office of Human and Organizational Development and Planning; Melissa Daly, chief of staff in the Office of the President; Dean of Students Bonnie Prunty; and Wendy Hankle, senior executive communications specialist.

Correction: A previous version of this article incorrectly stated the release date of the plan. It was released in June 2019, not August 2019. It has been corrected.