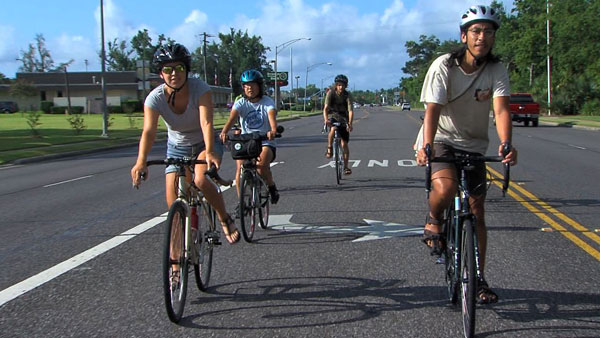 Courtesy of Kaela Bamberger
From left, senior Kaela Bamberger joined Hannah Mott, Erik Rundquist and Ernesto Botello for a 350 – mile bike ride from New Orleans to Houston in June. The ride offered them a firsthand look at the effects of fossil fuels.
By Sage Daugherty — Online News Editor
Published: August 29, 2013

Ithaca College senior Kaela Bamberger took the ride of her life this summer when she biked from New Orleans to Houston as part of an environmental activist internship program, Ride for the Future.

Ride for the Future is a summer bike tour that aims to draw attention to climate change and the effects of the fossil fuel industry in the Gulf Coast region. So far, it has completed two tours. Bamberger said the inspiration for Ride for the Future was a similar program called Climate Summer, which hosts bike tours across New England as a way to address society’s addiction to fossil fuels and encourage participants to find solutions to this problem.

Bamberger said she got involved in Ride for the Future after she saw the program advertised on 350.org, a climate change–activism website named for 350 parts of carbon per million parts of oxygen. Bamberger said this is an ideal atmospheric level because the Earth’s air is clean and breathable. However, the current carbon count is 400 parts per million and rising, which is bad because it contributes to climate change, Bamberger said.

At first, Bamberger said she was wary of accepting the internship because of the grueling physical challenges of a bike tour. Ride for the Future is essentially a traveling internship, unlike the summer experiences most students have working in traditional office spaces, Bamberger said.

“It’s an immersive internship, so you don’t get to go home and relax in your little apartment,” she said. “I’ve never done a bike tour before. I didn’t know the other people, and I didn’t really know what to expect, but I knew it wasn’t going to be like a regular internship.”

Bamberger and six other riders began their journey on May 20 in New Orleans. After training for two weeks, the group set off June 4, biking almost 350 miles to Houston. Each rider carried a bag of clothes and personal belongings. Along the route, the riders also took turns hauling four gear-laden trailers attached to the back wheel of the bike.

Hannah Mott, Wellesley College sophomore and rider, said one of the biggest physical challenges of the long trip was braving the heat and humidity in the South.

“[We] tried to get all of our biking done for the long days early in the morning, so we’d leave around 6 [a.m.], and we’d usually get somewhere where we were staying around 11 [a.m.] to try and beat the heat,” Mott said.

Bamberger said the bike tour was different from more traditional rallies she has previously attended because it gave the riders an opportunity to meet people working in the fossil fuel industry and hear their perspectives.

“Some of the more interesting conversations I had about climate change and the environmental movement were with church members or people who had worked for Chevron for 30 years,” she said. “That was some of the most valuable dialogue I had.”

Bamberger said meeting with these individuals during the trip made her consider a different approach to environmental activism.

“We saw ourselves as sort of a ticker mark in the movement,” Bamberger said. “What I valued the most is people who work for the industry — to meet with them and have a discussion with them. We really got to interact with people on the other side of the spectrum from us.”

Bamberger is also a founding member of IC Frack Off, a student organization that aims to fight against hydraulic fracturing and motivate the campus community to take action against fracking.

Bamberger said her summer experience inspired a conversation with other executive members of Frack Off about the future of the organization and their decision to broaden the group’s focus and also support alternative energies.

“[It] is a really big part of what I took away from the program, which is that you can’t just bash the industry — entire populations depend on this for their livelihood,” Bamberger said. “It’s unrealistic to expect these huge corporations to bow down and keel over, and so from that we are focusing on alternatives.”

Bamberger said one man working in the fossil fuel industry called out the riders’ hypocrisy — even though the group is fighting against fossil fuels, it is also perpetuating the usage by riding bicycles made from oil.

“It was just this moment [that] changed my perspective on how the issue needs to be treated, because in the movement, what they’re trying to do is demonize the industry,” Bamberger said. “It’s the wrong way to approach it, and Ride for the Future really opened my eyes to that.”

Tara Escudero, the director of Ride for the Future, coordinates all of the logistics and recruitment for the program. Because of the program’s small budget, Escudero said it’s vital to develop relationships with the communities that house the riders.

“For housing, primarily, I get in touch with churches and similar faith communities,” Escudero said. “We have a small budget, so we rely on the hospitality of faith communities to host our riders for free for the most part, and they’re usually just a really good connection to the community.”

Bamberger said her experience being on the road gave all the riders a chance to push themselves out of their comfort zones and become more accepting of the people they met.

“It was definitely a challenge for me, because I’m sort of a nester,” Bamberger said. “I like having my things and being comfortable, and it was exactly the opposite in that you’re constantly on the move.”