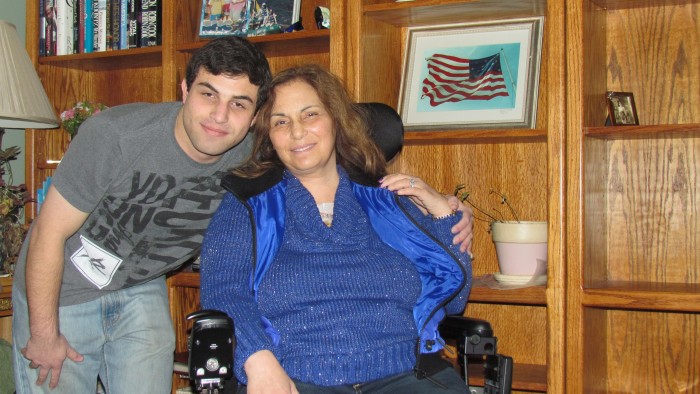 Courtesy of Scott Kaneff
From left, senior Michael Kaneff poses with his mother, Judy. She suffers from myotonic muscular dystrophy, which is a genetic condition characterized by deterioration of muscle tissues.
By Noreyana Fernando — Staff Writer
Published: December 13, 2012

Senior Michael Kaneff received his first camera when he was four years old. It was a gift from his mother.

Seventeen years later, his love for the camera remains, but a lot has changed in Michael’s life since that day. When his mother, Judy, was diagnosed with muscular dystrophy in 2004, he saw the world through a different lens.

Muscular dystrophy is a genetic condition, characterized by the degeneration and death of muscle tissues. It also affects other body systems such as the heart and pancreas. Patients experience symptoms such as delayed development of motor skills, mental retardation and sometimes death. Currently, there is no cure for the disease.

Kaneff’s mother suffers from myotonic muscular dystrophy, which is characterized by prolonged muscle tensing. Judy, 56, sits on a wheelchair and is tended to by a hired helper at their home in Wyomissing, Pa. Each day is a struggle at the Kaneff residence.

“[My mother] has been on a big downslope,” Kaneff said. “Like I tell everyone, it’s always down. It’s not going to get better. That’s the hard reality of it. And there is no more prolonging it.”

Judy cannot be left alone. She visits the emergency room every other week. What once seemed like simple chores are out of her reach. She can no longer garden, go up the stairs or walk. A large part of her day is spent lying down on a bed.

But Judy said she has many reasons to smile.

Her voice rings with happiness as she talks about Michael, her only child. She recalls how she reached out to a local Pennsylvania chapter of the Muscular Dystrophy Association in 2006.

After his mother was diagnosed, Kaneff who is currently a television-radio major, began producing videos for the national MDA. His videos focus largely on the daily lives of those affected by the disease and the families of patients.

“He really polished it in Ithaca to the point that, even in a tough job market, I am confident he will be able to get something,” Scott said.

While he has no definite plans for after graduation, Michael said he will continue working in the field of video production. He also said that he plans on having a full time job with the national MDA.

Kaneff’s videos are shown at MDA’s annual Black-n-Blue Ball, a fundraiser to help fund MDA summer camps and research. At the event, hundreds applauded Kaneff’s videos. Kaneff has produced six videos in seven years, one with more than 37,000 views. Comments on the videos have spurred discussions about possible cures, with viewers from around the world corresponding with American viewers.

His 2006 documentary, which was also his first, focuses on the lives of several young Americans affected by MD. One of the people with MD featured in the documentary, Alexa Dectis, 13, was diagnosed with spinal muscular atrophy. Speaking in the video, Dectis described how the MDA’s summer camps make her feel like a normal person.

“Having a neuromuscular disease can sometimes be really hard because all your friends are outside playing hide-and-go-seek while you have to go on your breathing machine,” she said in the video. “You are not really a regular kid sometimes. But at an MDA camp, you know that you are a regular kid because you are with people who are just like you.”

Kaneff remembers working with the editor of his local newspaper, one of the MD patients featured in his first video.

Michael’s local MDA chapter helps him in his search for MDA patients for his videos. He then interviews them and picks out the segments that best convey the message of the MDA.

Yet, despite the many videos that he has produced, Kaneff worries the world is unaware of the implications of muscular dystrophy.

“There are a lot of misconceptions about it,” Kaneff said. “It’s not something like cancer where everybody knows about it.”

Michael Blishak, senior vice president for community programs at the MDA, said Kaneff’s work highlights the positive attitude people can have despite the disease.

“Michael is a very creative, intelligent, artistic young man who just knows how to tell a story,” Blishak said. “He is all about people.”

The MDA funds more than 300 research grants across the world, where researchers work to find treatments for the 43 differents types of MD.

Blishak said with his work, Kaneff conveys the message of hope MDA brings.

“The role that Mike plays in using his creativity and knowledge of the wonderful world of video in putting together a story, really truly does help in bringing forward MDA’s message of help through our clinics and hope through our research,” Blishak said.

Michael said his videos for the MDA convey a message of hope for everyone.

“Hope,” Michael said. “That’s the big word that the MDA uses, and I had it in my videos. Even families said it. All we can do is hope, and that is all we can do.”