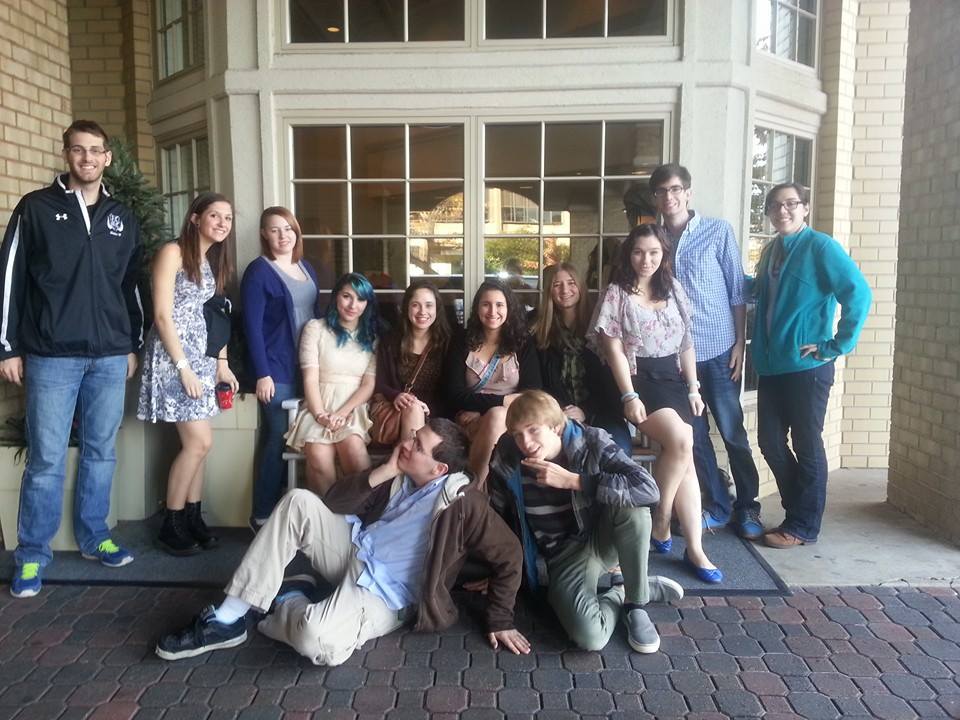 Courtesy of Cassie Walters
Members of the Ithaca College chapter of Active Minds attend the organization's national conference in November in Washington, D.C. The petition was inspired by a conference workshop.
By Megan Devlin
Published: January 22, 2014

With one in four college students in the U.S. experiencing mental illness, Ithaca College students are asking the world’s most-used search engine to promote mental health advocacy by flagging searches for self-harm information on the Internet.

The college’s chapter of Active Minds, a national nonprofit that raises mental health awareness among college students, is spearheading a national effort to have more prominent inclusion of mental health resources in Google searches for potentially harmful terms, like anorexia, cutting and suicide, by creating a petition on Change.org. The goal is to collect 10,000 signatures before Active Minds presents the petition calling for a pop-up window that provides a link to resources for those who may be in need of help.

Junior Jared Wolf, former co-president of Active Minds, said the idea for the petition came during the Active Minds National Conference in November, where he attended a workshop about how the media affects people’s perception of mental health. There, they discussed how social media websites, like Tumblr.com and Facebook, have created safe spaces for users, he said.

Bringing this conversation back to campus, Wolf said, sophomores Cassie Walters, advertising chair, and co-event chair Joey Heiland created a Google-petition committee. They proposed creating a mental health resource page that would protect Google’s billions of users and demonstrate that the world’s largest search engine is responsible for the available information.

“With Google’s mission being to make the information of the world accessible and useful to the people of the world, as mental health advocates, we strongly feel this is a way they can do that in a really meaningful way,” Wolf said.

Walters said Active Minds’ petition is based on a policy the microblogging website Tumblr created in 2012. An opaque dialogue window appears over searches associated with self-injury, and it includes language that encourages users to view Tumblr’s list of mental health resources or to dismiss the message.

“It just basically stops you in your path for a split second, and it makes you think about what you’re doing and can have you second-guess it and get help that you may need,” she said.

Walters said when users search for the word “suicide,” Google generates the national suicide hotline number. However, the display is not as obvious or informative as Tumblr’s pop-up window directing users to mental health resources. Active Minds’ petition provides a list of 27 search terms, which Walters said she hopes Google considers using as prompts for a pop-up window.

“I want the page you click on for more information to be in-depth with different resources for different problems, because for someone who may Google something about an eating disorder, it’s not going to help them to have a suicide hotline,” Walters said.

In addition to a pop-up window, Tumblr also blocks blogs whose content “actively promotes or glorifies self-harm.” The original policy was controversial and received backlash about censorship. But Tumblr’s implementation process helped avoid criticism by collecting feedback from its community of users and modifying the policy based on the response.

Jeff Cohen, director of the Park Center for Independent Media, said Tumblr’s policy was sensitive to the needs of people struggling with mental health issues, and Active Minds should encourage Google to similarly add more voices to the conversations around mental illness, instead of blocking them, in order to avoid perceptions of censorship.

“With crowdsourcing, you can really talk to a community and hear every side from a community before you finalize your policy,” he said. “The best antidote to bad speech or oppressive speech is more speech, not less.”

Heiland said the group does not want people to think its proposal for a pop-up window with mental health help is a form of censorship.

“We just want the option to be there for people to be able to get help if they want to get it,” he said.

This semester, Walters plans to resume meeting with the Google-petition committee and develop a strategy to collect signatures from people around the world in order to estimate how long it may take to reach the goal of 10,000.

“We’ve gotten different resources in the Ithaca community to share it, and we’ve gotten friends,” she said. “I’m also hoping to send it to other clubs, professors, departments on campus, and having them share it and hoping this thing kind of spreads like wildfire.”

Lee-Ellen Marvin, executive director of Suicide Prevention and Crisis Services in Ithaca, said she signed the petition because it could help shift our culture around suicide prevention.

Wolf plans to bring the college chapter’s petition to the national level while interning with the Chapters Team of Active Minds in Washington, D.C., this semester. He said he will be in communication with all 445 chapters around the country.

“I will have an opportunity to find out what other chapters think about it, if it’s something that they want to team up with us on,” Wolf said. “If we can have two or three other chapters pushing it on their college like we plan to, that’s hundreds and hundreds of signatures.”