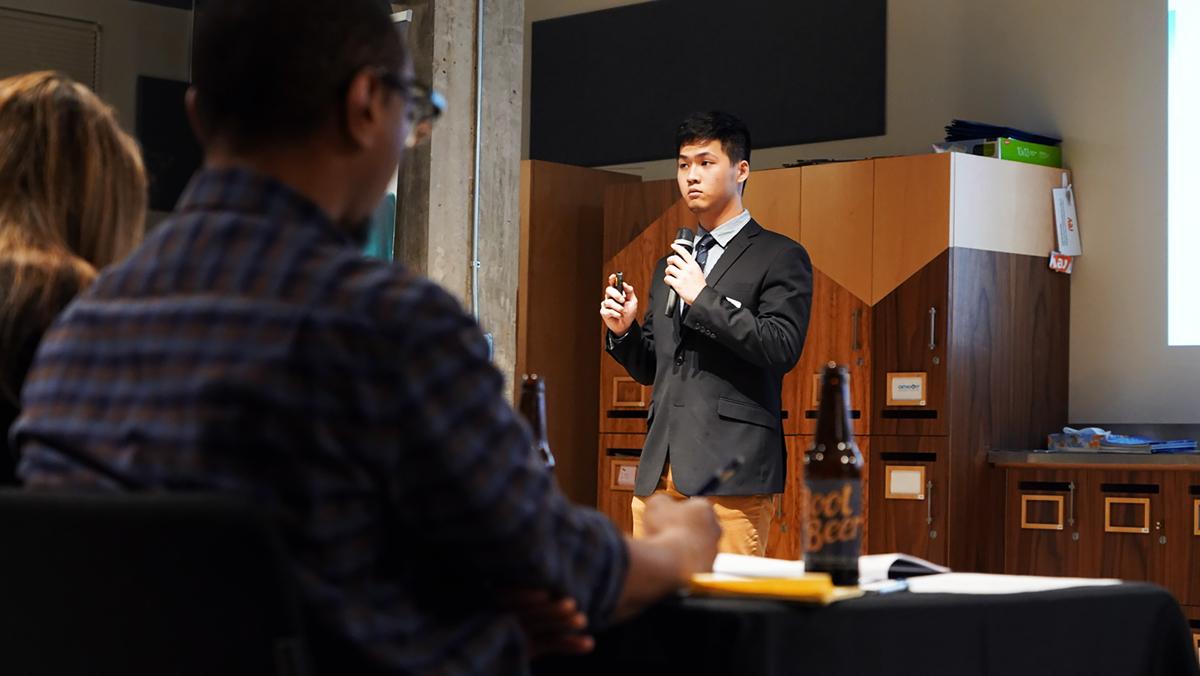 Ornaked, a clothing line that makes only one copy of every piece of clothing, is a student-run startup business that won $1,000 at the annual Ithaca College Startup Idea Demo Day on Nov. 19.

Belle Gloss, a vegan and gluten-free lip gloss company, and Instajob, a business that provides people in minority communities with better access to jobs, both received $800.

At the event, eight teams of students presented their ideas for successful business startups for a chance to win part of $5,000. The presentation took place at Rev Ithaca Startup Works, with approximately 30 people in attendance who were a mix of Ithaca community members, Binghamton locals and students and professors from both Ithaca College and Cornell University.

The students had four minutes to present their ideas to a panel of three judges, who then spent four minutes asking the students about their ideas and their feasibility. During their presentations, students outlined their products or services, what kind of competition they might face and how they would use different amounts of money to fund their businesses.

The eight teams consisted of EnterCare, a device to encourage employees to wash their hands; SharkFinder, a buoy that alerts lifeguards of the presence of sharks in ocean waters; biebs_shreds, an Instagram account in which sophomore Ryan Bieber plays rock remixes of popular songs; Sneakerheadz, a monthly subscription service for high–quality sneakers; RoomMe, a site that helps people find roommates in large cities; Ornaked; Belle Gloss; and InstaJob.

Senior Emmanuel Candelario, who created Ornaked at the start of 2018, said it was difficult for him to fit his whole company into a four-minute presentation.

“Definitely a lot of anxiety going into it. It was one of the most nerve-racking experiences of my life,” Candelario said. “It was the first time I’d actually had to pitch my company. One of the hardest issues behind this competition was you only had four minutes to explain a company you’ve thought about for years.”

Sophomore Felix Santos, who founded InstaJob, said that he had been working on it since his junior year of high school and that having a team behind him helped the idea come together.

InstaJob received $400 from the judges and then an additional $400 for winning both the audience choice award and the sustainability award.

Sophomore Alex Butler said many of the students who proposed ideas for the event took the same entrepreneurial innovation class he also took. Butler said the class helped the students develop their ideas into ones that could be marketed to a panel of judges.

“I got to see each of these grow through the class,” Butler said. “None of them started the way that you see them now, so it’s been interesting to see the progression of each of these companies.”

Butler said Ornaked, Belle Gloss and biebs_shreds were not a part of the entrepreneurial class.

Freshman Massaran Cisse, who started Belle Gloss, said she presented at the Roy H. Park Hall for Park Tank on Oct. 11. At Park Tank, students present media-based businesses to a panel of alumni anda  faculty judges. Cisse said she was unfamiliar with conducting a business presentation like the presentation she gave for Startup Idea Demo Day.

“I presented at Park Tank and won audience favorite, but this is a business-style presentation, so I had to switch it from marketing/advertising in the Park School to a whole business thing, which was hard,” Cisse said. “There was a lot of math involved, a lot of terms I didn’t know as a Park student. So it was harder for me to compete against business students.”

Ithaca High School senior Elise Schwarz said she enjoyed several of the ideas presented because of how they would apply to her as someone entering college.

“But the ones that I actually thought I might use were the roommate one and the job-finding one just because I feel both of those are really difficult paths to take, especially when you’re going into college for the first time,” Schwarz said.

biebs_shreds is operated by sophomore Ryan Bieber, staff writer for The Ithacan.