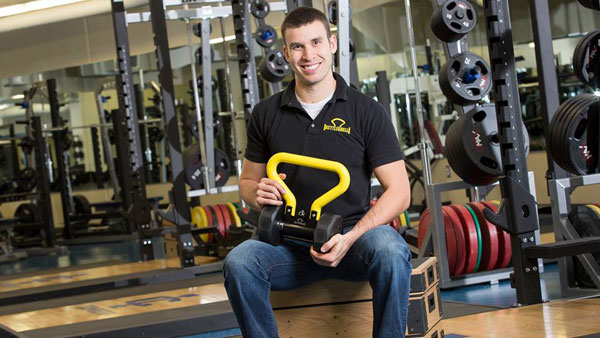 One Ithaca College student will be able to take his business idea to the marketplace, just having freshly packed his pocket with $20,000

Tim Reynolds, sixth-year graduate student in the Department of Physical Therapy, took the first-place prize at the first-ever Business Plan Competition on April 22 for his entrepreneurial company and product, KettleShell.

Since the fall of 2012, Reynolds and Brian Rettger ’11, who was an exercise science major at the college, had been developing the business model for an adjustable weight holder that combines the functions of dumbbells and kettlebells into one piece of equipment.

Reynolds said the idea came out of a simple brainstorming session in the library one night. As both Reynolds and Rettger are in the exercise science field, Reynolds said, they drew upon their recreational and academic interests to come up with an idea that has utility among individuals who are avid exercisers.

“I’ve seen people try to use dumbbells in the manner that you would a kettlebell, but it wasn’t accomplishing the same thing that a kettlebell would actually do,” Reynolds said.

The KettleShell is a device that is shaped like a kettlebell and can hold a variable amount of dumbbells, removing the need to own both dumbbells and kettlebells, Reynolds said.

The two presented the prototype for the first time at the Business Idea Competition in 2012, for which they won first place and received $5,000. Reynolds said they used the money to produce the first batch of prototypes and pay for a patent and trademark.

Brad Treat, a lecturer in the School of Business and a local entreprenuer, said the Business Idea Competition was the brainchild of Christopher Burch ’76, the CEO of Burch Creative Capital, a brand development company.

Mary Ellen Zuckerman, dean of the business school, said Treat and Tom Schryver, lecturer at the college and CEO of PI Experiential Learning, teamed up with her to plan the competition beginning in 2011. The two were involved with Zuckerman’s project because of their local entrepreneurial connections. The next year, she said, the two developed a course wherein students from any major can develop their business ideas into companies and prototypes ready for launching. They proposed holding a Business Plan Competition this year for students with developed entrepreneurial plans to compete for start-up funds.

“The Business Plan Competition is a higher bar,” Treat said, “It’s not just ‘I have an idea,’ it’s, ‘I’m doing;’ I’m creating this real company.”

Treat said the only prerequisites to entering the competition were to be a student at the college and respond to a brief questionnaire. Seventeen teams were admitted to the semi-finalist round April 17, and the panel of judges, made up of entrepreneurial alumni, narrowed them down to six finalist teams for the April 22 competition.

Zuckerman said Burch has provided all of the funding for these competitions, which awarded $20,000 to first, $10,000 to second and $5,000 to third place among six contenders. She writes him a report each year of the results of the college’s competitions and teams that have been successful in regional and state competitions so that he can see his return on investment, she said.

“This money that he gave helps the students here, but it also leverages us regionally and statewide so that Ithaca College is really making itself a name for being involved in entrepreneurship, and so that he sees that we’re stewarding his money really well,” she said.

Since Rettger is undergoing basic training for the armed forces, Reynolds has taken over all of his budding company’s responsibilities for the last two months. As chief executive officer, Reynolds was the representative recipient of the award at the competition.

Reynolds said he plans to use the prize money to increase marketing and manufacturing of the KettleShell. After building four prototypes and researching three manufacturing companies, he said he has settled with Stonewell Bodies, a manufacturer in Genoa, N.Y.

The KettleShell has evolved from a model made of a styrofoam ball and duct tape to a physical adaptation of an adjustable kettlebell, Reynolds said.

“The KettleShell has been my life for the last year and a half,” he said. “I’ve watched it grow from a styrofoam ball into a product that we are currently selling.”

Reynolds has already sold 37 preorders of the most refined prototype for a retail price of $99.95 each. He said a large portion of the target market consists of private gyms, personal trainers and college students.

Treat said Reynolds has the potential to become a tenant of the Downtown Ithaca Incubator, the collaborative space in Ithaca for business development that will open in this summer, because he has the drive to follow through with his idea.

“Really it comes down to not capability, but seriousness — do you really want to go forward with this?” Treat said. “I would say any six of those teams would be great candidates for the incubator.”

Reynolds said if he stays in Ithaca after graduation, he would be interested in being a part of the incubator, and he plans to stay with the product to see where its potential in the market goes.

“To let it go now would be a disservice to all the hard work that we’ve invested into it,” he said.