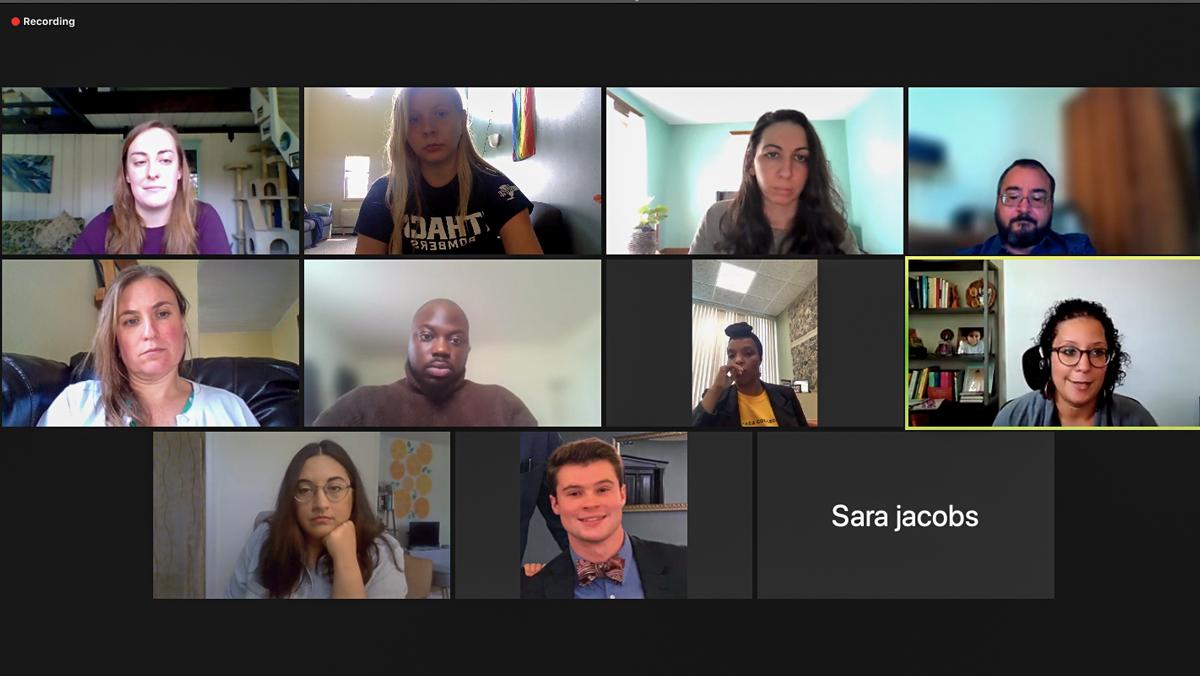 The panel, hosted virtually by Sam Elebiary, BOLD program director, was held May 4 and concluded the Fundamental Film Screening viewings that ran through April for Sexual Assault Awareness month. Fundamental Film Screening is a documentary film series by Sharmeen Obaid-Chinoy, a Pakistani-Canadian journalist, filmmaker and activist, and the Global Fund for Women. Each video features different human-rights activists across the globe as they advocate for gender justice.

Vieneuve gave an overview of activist organizations addressing gender justice issues and answered questions about activism surrounding gender justice. The panel, which included Elyse Nepa, clery act and crime prevention coordinator in the Office of Public Safety and Emergency Management; Omar Stoute, deputy Title IX coordinator in the Department of Legal Affairs; Natasha Bharj, assistant professor in the Department of Psychology and in the Women’s and Gender Studies program; and Luca Maurer, director of LGBTQ Education, Outreach and Services, also discussed the meaning of low attendance for the portions of the Fundamental Film Screening on United States activism compared to attendance at the globally-focused screenings. The May 4 panel had two students in attendance.

The other documentaries in the series are based in Pakistan, Kenya, Georgia and Brazil.

“I think it’s not just with regard to this series and this really important discussion, but in general,” Maurer said. “I’ve observed that it’s an easier entry point for folks that I know to take a look at something that’s happening somewhere to some folks that are very far away from us.”

However, Vieneuve said getting started in activism requires a passion and close connection to the subject.

“The first thing that I always say is that you cannot, you cannot be an activist, on behalf of others,” she said. “It needs to be something that is truly firing you personally.”

For example, Vieneuve said she feels the need to advocate for mothers, especially in Syria, who constantly have to protect and distract their children during bomb raids and mothers who have disappeared.

“There are many different dimensions that speak to us and that makes us really say that I cannot live in a world where this is happening without speaking up and engaging,” she said. “Once we’ve identified this, we need to start large.”

Vieneuve said it is important to organize public action and talk to others rather than relying only on social media.

“Social media is great — online campaigns have really shown their power,” she said. “But I think if we don’t tie it back to public action, to engagement with people in the real world, we’ll just be tweeting at each other and that there’s just a limit to how much this can produce.”

Bharj said activism is collaborative and students need to figure out where they fit in that.

“We can do some kind of social comparisons of like, ‘Why am I not doing enough,’ or, ‘Why aren’t I doing as much as this person?’ but instead, feeling like, you know, we’re so lucky and honored to be part of a community of people that are doing amazing work and we can support each other,” she said.

Vieneuve suggested the group research the movements Tal’at in Palestine, Ni Una Menos in Latin America, and I Didn’t Ask for It in the Balkans to provide a framework for reflecting on sexual- and gender-based violence.

She said all of the movements have similar goals of advocating for women’s sovereignty.

One example she highlighted was abortion laws. Vieneuve said making abortions illegal does not stop them from happening. Instead, she said it makes women more likely to die from abortions.

“Calling for the end of women’s murder includes calling for legalizing abortions because the criminalization is killing women,” Vieneuve said.