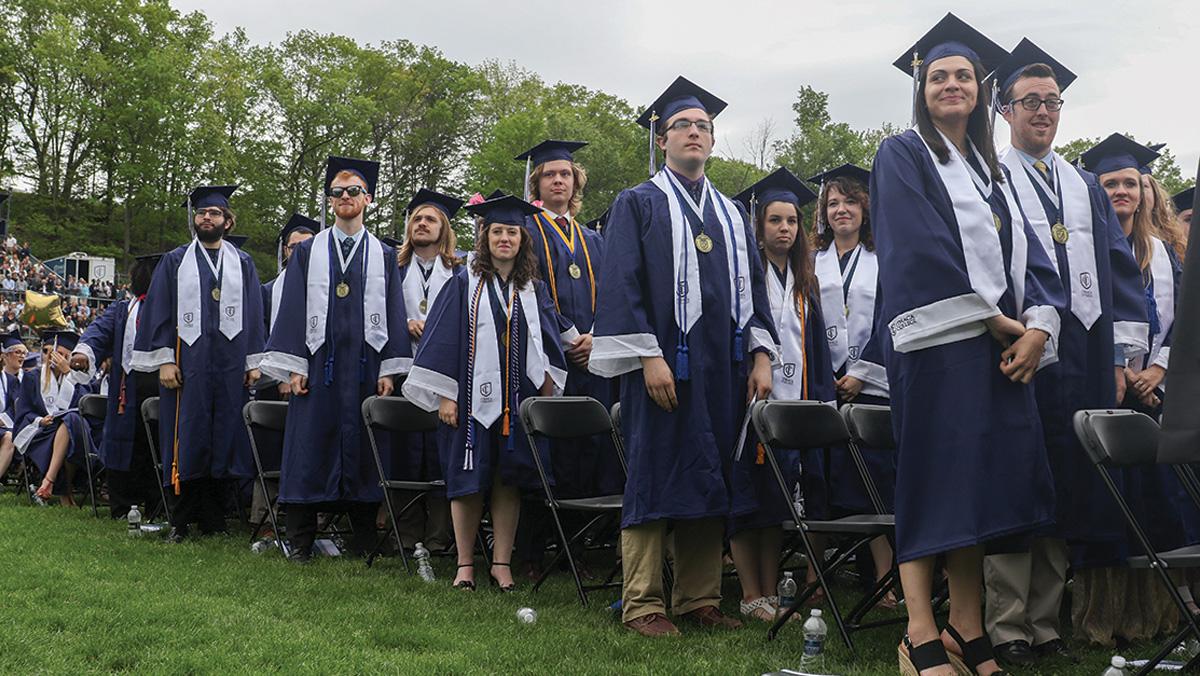 File Photo/The Ithacan
In a March 25 announcement, the college stated that the Commencement ceremony for the Class of 2021 will be held May 21 for graduate students and May 23 for undergraduates in the Glazer Arena at the Athletics and Events Center.
By Alexis Manore, Ashley Stalnecker — News Editor, Senior Writer
Published: April 8, 2021

After a year of isolation and remote and hybrid instruction, Ithaca College seniors will be able to walk across the stage and accept their diplomas at an in-person commencement ceremony.

In a March 25 announcement, the college stated that the Commencement ceremony for the Class of 2021 will be held May 21 for graduate students and May 23 for undergraduates in the Glazer Arena at the Athletics and Events Center. Students with scheduled graduation dates from October 2020 through and including December 2021 are eligible to participate in the May 2021 events. Undergraduate students will be able to walk across the stage at the arena in full graduation regalia, will have their names called and will receive their diploma covers and class medallions. There will also be virtual options. Last year, the college held five virtual ceremonies for the Class of 2020 after the in-person commencement ceremony was canceled.

In an April 2 statement, the college announced that Liz Tigelaar ’98 will give the main address at the ceremony. Tigelaar is an Emmy-nominated television producer, creator and showrunner. Economist Raj Chetty and the Very Reverend Kelly Brown Douglas will be presented with honorary Doctors of Letters degrees. Eileen Filler-Corn ’86, the first woman and Jewish person to serve as Speaker of the Virginia House of Delegates, will receive the presidential medal.

“Both [Tigelaar] and our other honored guests personify the ideals of the college’s mission to educate, engage and empower through theory, practice and performance,” President Shirley M. Collado said in the statement.

Senior Ali Kelley, senior class president, has been chosen to be the student speaker. This year, the student speaker was selected by a panel composed of seniors Carley Teachout, Jenni D’Urso, Lily Martino, Jasmine Morrow and Bianca Summerville.

“I knew that I wanted to apply to be the speaker because I felt like I had a lot of experience with my peers and could speak on our past four years together,” Kelley said via email. “I am honored to have been chosen by the selection committee, and I want to make sure they get the recognition they deserve for taking the time out of their busy student-leader schedules to sit on this committee.”

Families and friends of graduates will not be able to attend the in-person ceremony for the Class of 2021 and will have to watch it through a livestream instead. This has caused some students to feel upset or disappointed.

“I’ve talked to a lot of seniors, and the common consensus is that we are all so pumped to be able to walk the stage together and celebrate with our peers, but we definitely want to have our families involved, which we know the planning committee is focused on in their planning,” Kelley said via email.

Senior Izzy Callen said she is glad to have graduation in person. However, the exclusion of outside guests makes it difficult to celebrate with her parents in Washington.

“I feel like graduation’s more for the parents and for other people to see you rather than for us to celebrate,” Callen said.

After a year of disappointments, senior Aidan Glendon said the in-person celebration is a source of joy.

“It’s super important that I get to walk physically,” Glendon said. “This whole situation has really stunk, but it’s the end of it. We get to walk across the stage. I’ll be really happy.”

Glendon said that it is unfortunate parents cannot attend but that the virtual ceremony solves a huge problem.

“I’m definitely upset about it,” he said. “But I also come from an interesting perspective because I’m a twin and my family would have been split either way because my twin is graduating on the same day, of course.”

If timing works out, Glendon said his parents can attend his sister’s graduation in person and still attend his graduation virtually without the pressure of trying to be in two places at once.

Chrissy Guest, associate professor in the Department of Media Arts, Sciences and Studies, and Steve TenEyck, professor and associate chair of the Department of Theatre Arts, are working with the Commencement Committee to create a ceremony that is both in person and virtual. Guest helped plan and execute the virtual commencement ceremonies last year.

TenEyck said he and Guest are not ready to discuss the details of the commencement ceremony because they are early in the planning process.

On behalf of the co-chairs of the Commencement Committee, Doreen Hettich-Atkins, executive director of the Division of Student Affairs and Campus Life, said the committee is especially pleased to work with faculty members to plan the ceremony.

“The co-chairs and I are proud and excited to be able to provide an in-person celebration for students who would like to participate,” she said via email. “Special thanks to Chrissy Guest … and to Steve TenEyck … for their excellent work in helping us to visualize and create what will be an in-person and virtual experience that only Ithaca College could create.”

Rather than dividing up the graduates by school, which was done in previous years, students will be able to sign up to graduate with groups of friends or classmates. Seniors must RSVP to the event by responding to an email sent from mydegree@ithaca.edu by April 14.

Callen said she thinks that celebrating with a group of friends will be fun but could present challenges.

“It’s nice to be with the people that you spend the most time with during your college years,” Callen said. “It’s also an extra stressor, I think, of choosing who you’re going to be with.”

Glendon said the lack of detail on the sizing of groups concerns him. The college said specific details will come in late April or early May.

However, Glendon, a student in the Park School of Communications, is looking forward to graduating with students in other schools.

“The prospect of being able to graduate with friends is really cool,” Glendon said. “I live with a politics major, and my other roommate has the last name W, so we would not have seen each other at graduation. Now we are all going to graduate together, and it’s going to be super fun.”

Senior Karnar Ueland, on the other hand, does not plan to attend the in-person graduation.

“I think that’s great for the people who want a formal ceremony,” Ueland said. “I personally thought it was more fun to hang out with my girlfriend’s family and watch the Zoom graduation last year.”

In addition to an in-person commencement ceremony, the college is holding Senior Splash, an annual event in which seniors jump in the Dillingham Fountains.

“Because of health and safety requirements and the level of work required to create a high-quality virtual experience, students who do NOT let us know that they are planning to participate will not be able to participate in any of these events,” Hettich-Atkins said via email.