Students intern at the Olympics 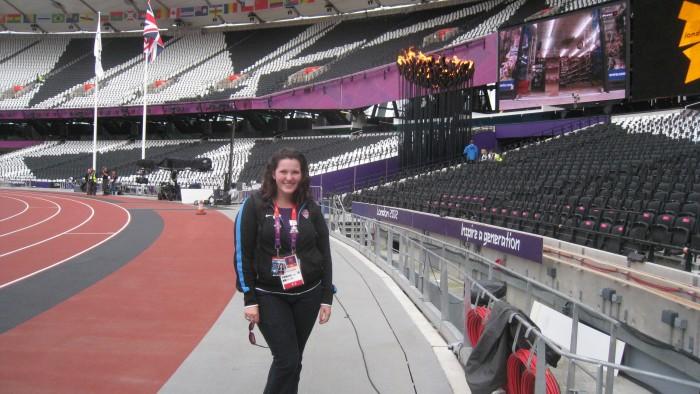 Courtesy Photo
Erin Dunphy stands next to the track at the London Olympics.
By Sally Young — Staff Writer
Published: September 5, 2012

While the world was watching the London 2012 Olympics, more than 30 Ithaca College students were interning with NBC Olympics to help create the content the public was viewing every day.

Students at the college have had the opportunity to intern with NBC for the Olympics since the 2006 Turin, Italy, games. April Johanns, the external relations coordinator at the Roy H. Park School of Communications, said NBC initiated the partnership.

“With Ithaca’s reputation for our students being hard-working and the curriculum that we teach, NBC approached us,” she said.Nearly all of this year’s batch of interns came from the Park School, with one coming from the School of Music and one from the School of Health Sciences and Human Performance. Many were assigned to cover specific sports, and others were in charge of selecting shots to be shown later.

As an intern for NBC, senior Erin Dunphy witnessed many historic moments. She said one of her favorite experiences was when she watched the South African “blade runner,” Oscar Pistorius.“Watching Oscar Pistorius get to run in his first Olympics, and afterwards the amount of respect that Kirani James, who ended up winning, had for him … it was amazing to see,” she said. “He’s got a very inspiring story.”

The yearlong application process began with students writing two essays about their motivation for applying and how the experience would help them. The pool was narrowed and the next step was an interview. A few months later the interviewees were informed of who would be interning. It took an additional three months for them to be notified of whether they would be located in London or at 30 Rockefeller Plaza.

Dunphy said she was overjoyed to discover that she would be interning in London.

“I was crazy excited,” she said. “I had a lot of doubts that I would be picked.”

Junior Colin Smith, who first applied when he was a freshman, was “ecstatic” when he got the news.

“I was in my house alone, so I could yell and scream as loud as I wanted,” he said.

Dunphy said her time in London prepared her to work in the high-pressure and ever-changing broadcast industry after she graduates.

She helped the editors work with a system called Interplay. After a big moment in track and field, Dunphy went through all the camera angles and chose the best ones to air during recaps or feature stories.

“It gave me a lot of great skills — life skills and the technical skills that I’ll have to use in the field,” she said. “You can’t be hurt when, at the end of the day, they’re like, ‘OK, this piece isn’t working,’ and it’s something that you spent hours on.”

Smith also worked as a shot selector. He watched different types of sports, such as soccer and tae kwon do, logged the footage and created a three to five-minute highlight clip. He did this about six times per shift.

This having been his first professional internship, Smith said he didn’t know what to expect.

“Now I know not to be so nervous. It’s definitely going to help me prepare and know how to interact with someone on a more professional level,” he said.  “The whole thing was so awesome.”

The pinnacle of his experience came when he took the lead on a story, he said.

After seeing an article about two badminton teams that were simultaneously trying to throw a match to improve their chances of playing a weaker team in the next round, he approached his supervisor about cutting a highlight for the story.

The next day, the clip was shown throughout the studio. He said he was praised for taking the initiative to find a story and follow through.

While Dunphy, Smith and other interns were on the production side of the Olympics, Meghan Musnicki ’05  was competing in the women’s eight rowing competition with her teammates. Musnicki transferred to Ithaca after rowing during her freshman year at St. Lawrence University. This was Musnicki’s first Olympic games and she won a gold medal.

Diane Gayeski, dean of the Park School, said having students intern for NBC is a testament to the school and its students.

“To be selected as one of the universities and colleges where NBC recruits is a statement to the world about the reputation of our students and our curriculum here,” she said.