Students join forces to take back the night 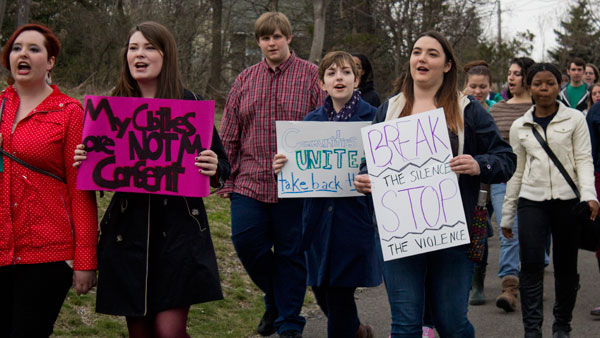 Sabrina Knight/The Ithacan
Ithaca College students rally for victims of sexual violence April 25 during their march down Hudson Street to Dewitt Park in Take Back the Night sponsored by the Advocacy Center of Tompkins County.
By Sabrina Knight — News Editor
Published: April 30, 2014

Paul, a person of color who identifies as “queer,” was homeless for three years and just wanted a safe place to sleep. Cheyenne grew up watching how her mother’s experience with sexual violence affected the rest of her life. Kimberly’s stepfather abused her when she was 10. Rose recently attended a self-defense class that was taught by her rapist.

These people are some of the many who shared their stories as survivors and allies for victims of domestic violence and sexual assault at Ithaca’s Take Back the Night event on April 25.

About 35 Ithaca College students marched from Textor Hall, down Hudson Street to a rally in Dewitt Park, where they met other groups which left from Cornell University and the Greater Ithaca Activities Center. Students from the college chanted phrases such as, “Hey hey, ho ho, patriarchy has got to go,” and held signs with phrases about how they are breaking the silence and that ideas of consent need to change — for example, “break the silence, stop the violence,” “communities unite to take back the night” and “my clothes are not my consent.”

In Dewitt Park, about 200 people gathered to hear stories from attendees and to learn more from the Advocacy Center of Tompkins County, which sponsored and organized the annual event. Students, community members and advocates played original songs about their experiences and performed spoken-word poems.

Elizabeth Brundige — executive director of the Avon Global Center for Women and Justice, and visiting assistant clinical professor at the Cornell Law School — spoke about sexual and domestic violence in a global context. She described two stories about how this is an issue in the United States and abroad: one about a woman in India who is recovering from injuries sustained after her husband of an arranged marriage threw acid in her face, and another of a woman in Colorado whose husband abducted and killed her three children.

Dan McMullin, director of campus ministry at the college and at Cornell University, who also presented at the event, said about 19 percent of all undergraduate women are victims of sexual assault, and of those, only 5 percent actually report their experiences or take official action.

“That serves as a healing process, and they have the community there, and there is a chance to talk about your experience and to see that support firsthand,” Boccanfuso said.

Presenters during the speak-out session each had a different method of coping with their situations. Some were open with all the details of their experience and how they are taking action, whether it be through the judicial system, getting professional help or personally finding a way to overcome it. Others said they haven’t reported their attackers yet because they are struggling to find their voice.

A freshman at the college, who spoke during the speak-out session, said he was abused by his mother’s boyfriend’s children for years and has only just had the courage to say something this year, although he still had the feeling that his own family wouldn’t believe him.

“The fact that even if I identify as queer and people not understanding what may have happened to make me even question [my identity] — that hurts me more, because a community has been discriminated and marginalized in the past and continues to do it within themselves,” he said.

He continued his speak out by explaining how he thinks justice cannot always be solved with the judicial system.