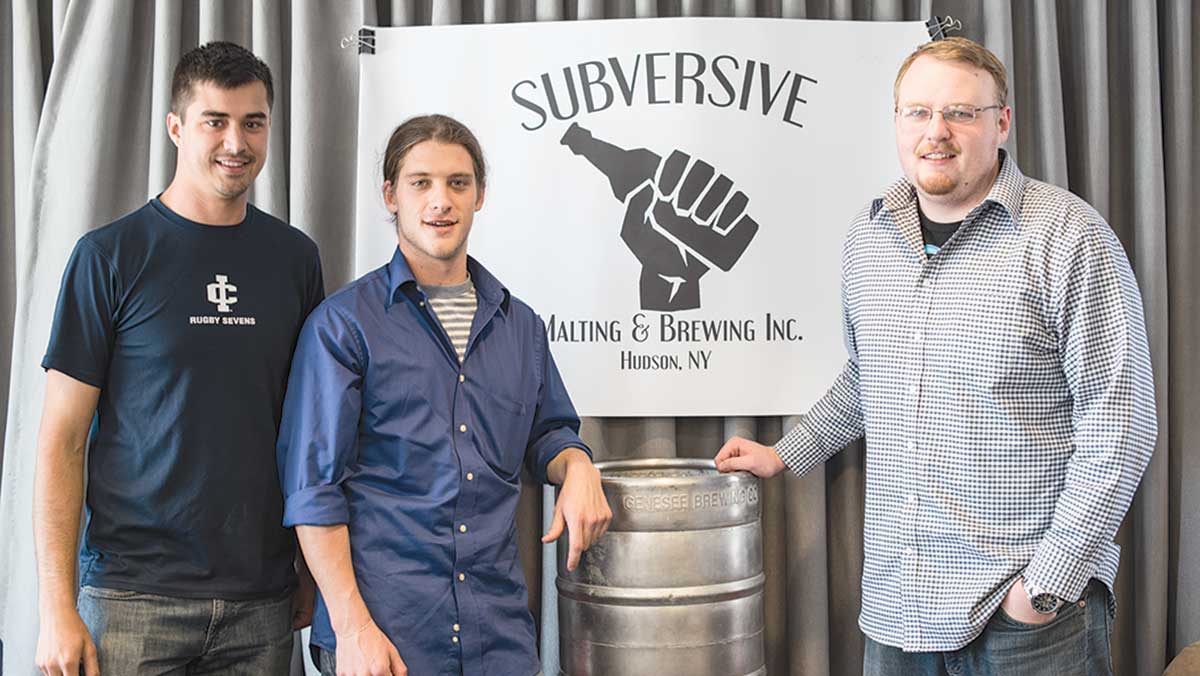 Subversive Malting & Brewing, the grand-prize winner, is a company focused on malting and brewing in the Hudson Valley. The company will use malting methods that haven’t been used since before the prohibition, Ocean said.

The only requirement of applicants is to be an Ithaca College student, Treat said. Eighteen students entered the competition this year, and six made it to the finals, he said.

The competition includes a 10-minute presentation from each team and a five-minute period for judges to ask questions.

The second-place prize of $10,000 was awarded to a social movie theater application, OnSet, created by sophomore Kat Fischer and senior Eliza Diament. The application recognizes movie trailers, allowing viewers to access information about the trailer, tag it as a favorite and share it on social media. The third-place prize of $5,000 was awarded to FearWalk, created by sophomore Leonard Davis. FearWalk is an interactive haunted camping trip, during which a small group will spend 12 hours in the woods being haunted by the FearWalk team. In addition, audience members voted on their favorite business plan, which received $500. This award was granted to OnSet.

The idea for Subversive Malting & Brewing was born two years ago when Coffey, an environmental studies major, took a year off before his junior year at the college to live in Oregon, where he spent time brewing, Ocean said. Coffey introduced the art to Ocean, a journalism major, and Minogue, a philosophy major, who initially began brewing and malting for themselves before even considering a business.

“We realized pretty quickly that compared to a lot of folks that just home-grew out there, we had a different mentality,” Ocean said. “We weren’t necessarily more capable, but we had a different understanding of advancing our brewing abilities with every time we brewed, basically. That mindset is what sort of initiated it, and then it led us to start talking about a business idea because we’re all going to graduate.”

The business plan for Subversive Malting & Brewing has been under works for about four months now, Ocean said. Leading up to the competition, the team members focused on their malting and brewing skills and met with Treat to improve their business skills, he said.

Treat said the fact that Coffey, Ocean and Minogue are not business majors shows how diverse entrepreneurship is.

Treat said the Business Plan Competition is a great opportunity for students to thrive, but he wishes the teams could all receive a big award.

“I have a love-hate with the Business Plan Competitions,” Treat said. “I love putting $37,000 into our students’ pockets. I hate that we have to pick a winner out of such very different businesses. How do you compare an amusement theme to a barley distributor?”

This comparison among businesses is made after all of the teams have presented, and three judges discuss the businesses and decide on an overall winner. Treat said the judges are given a rubric to guide their conversation. He said when choosing judges, he mainly looks at their experience.

“We try to look for diversity in background,” Treat said. “If we were taking the census data they all look the same, but if you look at their resumes, they’re quite different.”

This year’s panel of judges consisted of Lee Henderson, president and founder of Vybion; Tom Schryver, executive director of the Center for Regional Economic Advancement at Cornell University; and Jerry Dietz, owner of C.S.P. Management in Ithaca.

Henderson said Subversive Malting & Brewing will be successful, as the business field they are entering will allow the company to grow. He said his advice for the team is to be persistent.

“Work hard and it won’t turn out exactly what you want, but it’ll be close,” Henderson said.

The competition as a whole, Henderson said, is a great opportunity for students to be introduced to the business industry, even if they don’t win.

“It’s a terrific way for kids to develop their ideas and really, whether they’re successful or not, the experience alone is valuable,” Henderson said.

In addition to the experience, Coffey, Ocean and Minogue will be walking away with $20,000, which they will use to apply for a USDA Local Foods Promotion Program Grant, Ocean said. If granted, this would give them about $100,000 for the business, he said. Ocean said the competition gave him an opportunity to explore the potential of another career option.

“I don’t know if I would have even decided to go an entrepreneurial route rather than trying to get a job in my major — which is journalism — immediately after school if it weren’t for this incentive and really thinking that we could win,” Ocean said. “The fact that it’s a sizable amount to really encourage good competition is what’s really important.”

Correction: This article previously said that  Subversive Malting & Brewing was the second of its type on the east coast. However, that is not the case. The current article reflects this change.