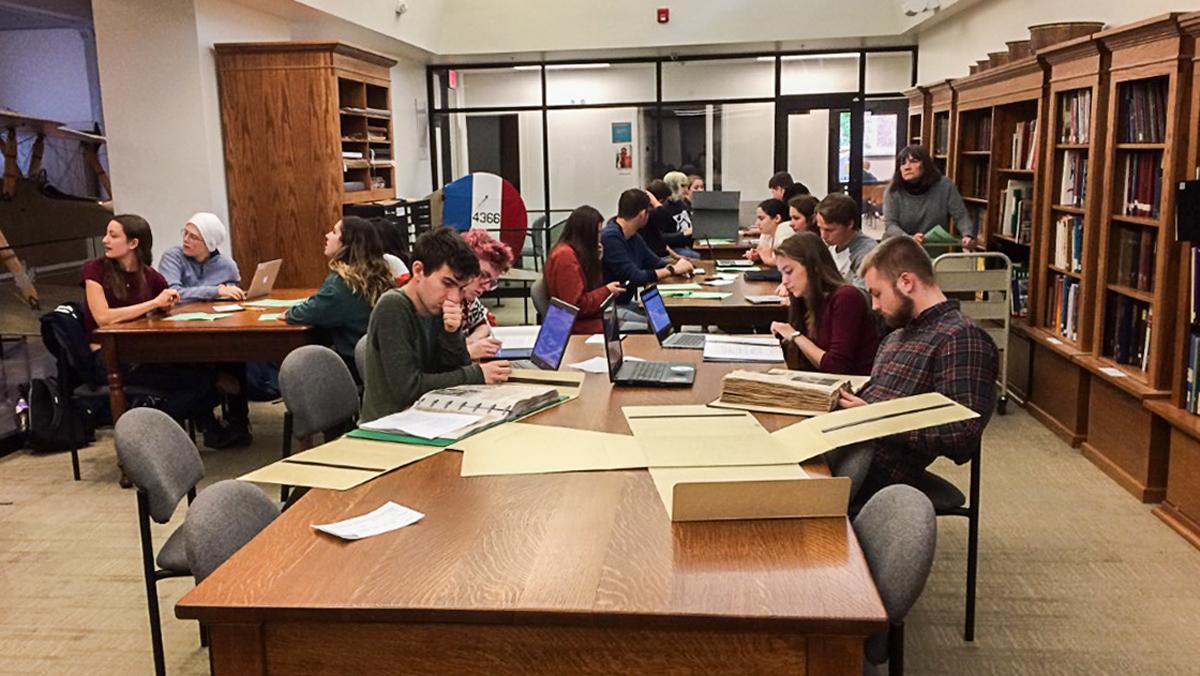 Courtesy/Michael Smith
The 25 students in the History of Environmental Thought class researched topics at The History Center ranging from the typhoid epidemic of 1903 to the efforts to stop the construction of a nuclear power plant along Cayuga Lake in 1968. The students presented their findings at The History Center on Dec. 11.
By Alex Hartzog — Staff Writer
Published: December 11, 2019

Surrounded by maps and manuscripts, Ithaca College juniors Alex Kavalec and Beth Fleming sat at The History Center. Here, they cross-referenced wells in Tompkins County in 1903 with a list of victims from the typhoid epidemic. Over the course of a few hours, the two realized the connection between the wells and victims. Tompkins County’s water source was contaminated, and they believe a dam constructed before the outbreak was to blame.

The 25 students in the History of Environmental Thought class researched topics at The History Center ranging from the typhoid epidemic of 1903 to the efforts to stop the construction of a nuclear power plant along Cayuga Lake in 1968. The students presented their findings at The History Center on Dec. 11. This event occurs biennially, said Michael Smith, professor in the Department of History. Smith teaches the class and is currently a member of the Ithaca College Board of Trustees for The History Center.

Students worked in five teams of five to research topics of their choice, Smith said. Smith said that while he provided topics to choose from, students could research anything they wanted with the archival materials provided by The History Center. Other topics students chose included floods in 1857, 1935 and 1981, the history of Six Mile Creek and the urban renewal plan that created The Commons.

“I think all five of the topics this year grew organically from the students probing around in the archives and seeing what they found interesting,” Smith said.

Smith has taught the class since 2001 and has been working with The History Center since 2005. Smith said he decided to create the project after students in the first iteration of his class said they wanted more hands-on experience with the course material.

Attendance for the presentations varies from year to year, with as many as 15 to 20 community members coming to the presentations, Smith said. The event was promoted on The History Center’s website and was highlighted in an Intercom post distributed through the college.

Smith’s class went to The History Center throughout the semester to research their selected topics. Kavalec’s group found that the dam that caused the typhoid epidemic changed the county’s outlook on water.

The History Center moved from the Gateway Center to its current location at the Tompkins Center for History and Culture, located on The Commons, in February 2019. The History Center opened in its new location in May 2019. Kavalec said the new location made it easier for her group to research at the center outside of class time.

The History Center provides manuscript collections, scrapbooks, maps and other historical artifacts for students to use in their research. Donna Eschenbrenner, director of archives and research services at The History Center, said that while students are not directly allowed into the archives, staff members and herself are able to retrieve anything the students ask for from the archives.

“I love seeing the ‘Aha!’ moments because a lot of these students aren’t history majors,” Eschenbrenner said. “They haven’t always had experience working with original materials. Seeing people handling and learning from and absorbing actual documentary materials that’s very old is deeply gratifying for me. I love it.”

“The chance to get to go and actually work in archives with real archival material from Ithaca was really exciting and interesting to me,” Kavalec said. “And [environmental studies] is a subject I don’t know a whole lot about, so being able to learn more about the history of Ithaca is a great opportunity.”