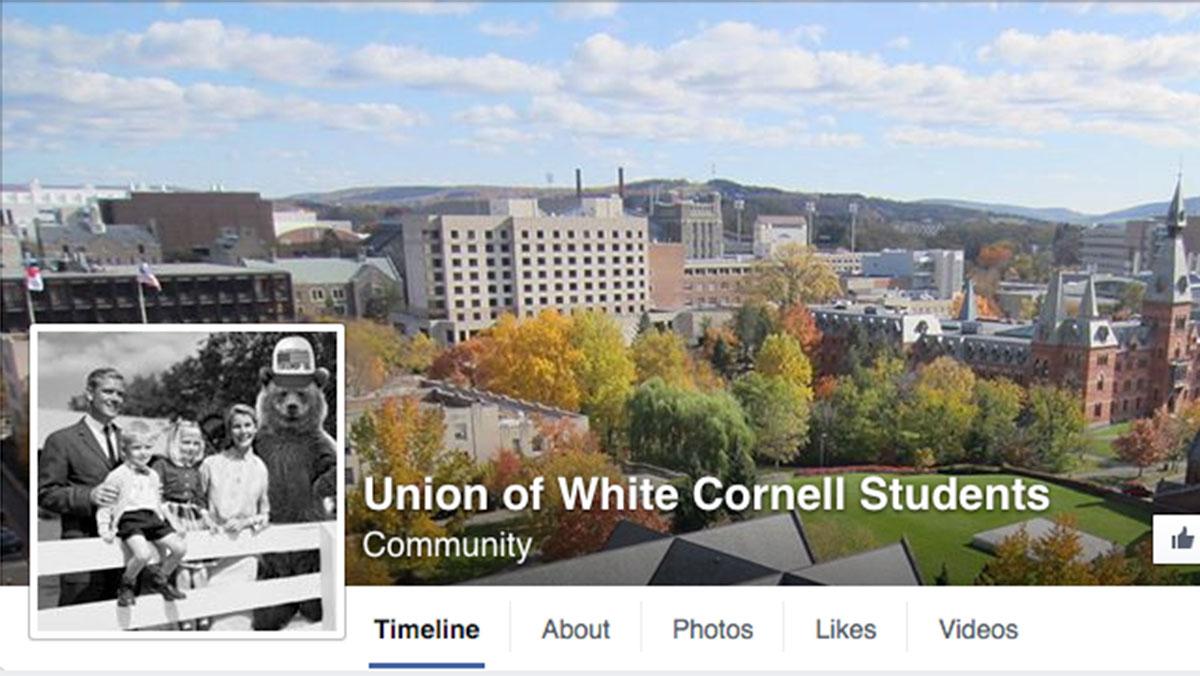 Courtesy of Union of White Cornell Students
White Student Union Facebook pages started to appear in November 2015 at more than 30 colleges and universities across the country. However, most of the Facebook groups were proven to be fake. The validity of the Cornell iteration is unclear.
By Daniel Hart — Staff Writer
Published: March 9, 2016

According to a post on the Facebook page, the group consists of over 100 “white students who wish to preserve and advance their race” at Cornell University, who meet in secrecy to avoid potential “character assassinations.”

White Student Union Facebook pages started to appear in November 2015 at more than 30 colleges and universities across the country. However, most of the Facebook groups were proven to be fake. According to BBC News, some Facebook groups, including those at Harvard University and Iowa State University, turned out to be real groups on campus.

John Carberry, senior director of media relations at the university, said the department does not have a way to verify if the group is real or not.

According to the post, recent protests have victimized whites and that the group “will seek to strengthen our university with fellow white students and reverse the nonsensical demands of extremist organizations on our campus.”

Derek Adams, assistant professor in the Department of English, has expressed opinions on the POC at IC movement’s “no dialogue” message. POC at IC stands for people of color at Ithaca College. Adams said the white union’s motive should be examined.

“If you have a group whose message is ‘Whiteness needs to be acknowledged, and there are issues that people who identify as white face that are unique to them that are distinct from all other kinds of racial groups,’ then I think that’s actually a good thing. I’m not against that per se,” he said. “But if the student group has been formed as an antithesis to the empowerment messages that are delivered by POC at IC, or the Black Student Union or the Afro-Latino Society, then I think what they are doing is misguided at best and at worst, a way of trying to relive an era of racialism that is detrimental to all of the community.”

Black Students United declined to comment for this article.

Junior Alexandra Szotka said she sees a similar racist ideology between the Facebook page and the unaffiliated Alpha Epsilon Pi  “Crooks vs. Preps”–themed party that was planned in Fall 2015. The party was eventually canceled following outcry from students and alumni.

“I feel like it’s an example of white privilege,” he said. “The fact that a white student union is created to combat shows the racism that is still going on today.”

Sophomore Veer Badani said while he is concerned with the Facebook page, he sees an opportunity for education.

“I just like to look at it positively,” he said. “They’ve made this group. Hopefully, many people will tell them how it’s wrong, or people will try to — instead of being angry — explain to them what the situations are with other people.”

Badani said he would like Cornell to make a statement saying it does not support the views of the page.

Carberry declined to comment on the university’s position on the group.

Nathan Ihemeremadu, a junior at Cornell, said he was surprised when he saw the account online.

“It’s weird that something like that can appear at such a liberal college,” Ihemeremadu said. “It’s bizarre how a group of students at Cornell can come together and create a group like that.”

Adams said he connects the issue back to the college’s own racial tensions and criticizes the Facebook page’s agenda.

“I think what this would mean for IC students is that in the same town and the same relative area in which they are being educated, you have a group of people who are seemingly advocating for a type of acknowledgement of whiteness that runs counter to some of the messages we saw in the demonstrations last semester and semesters prior to that as well,” he said. “The empowerment of people of color does not have to come at the expense of white students.”

This article has been updated to correct the spelling of Alexandra Szotka’s name.

Correction: Comments made by a Union of White Students at Cornell member were disputed and have since been removed.