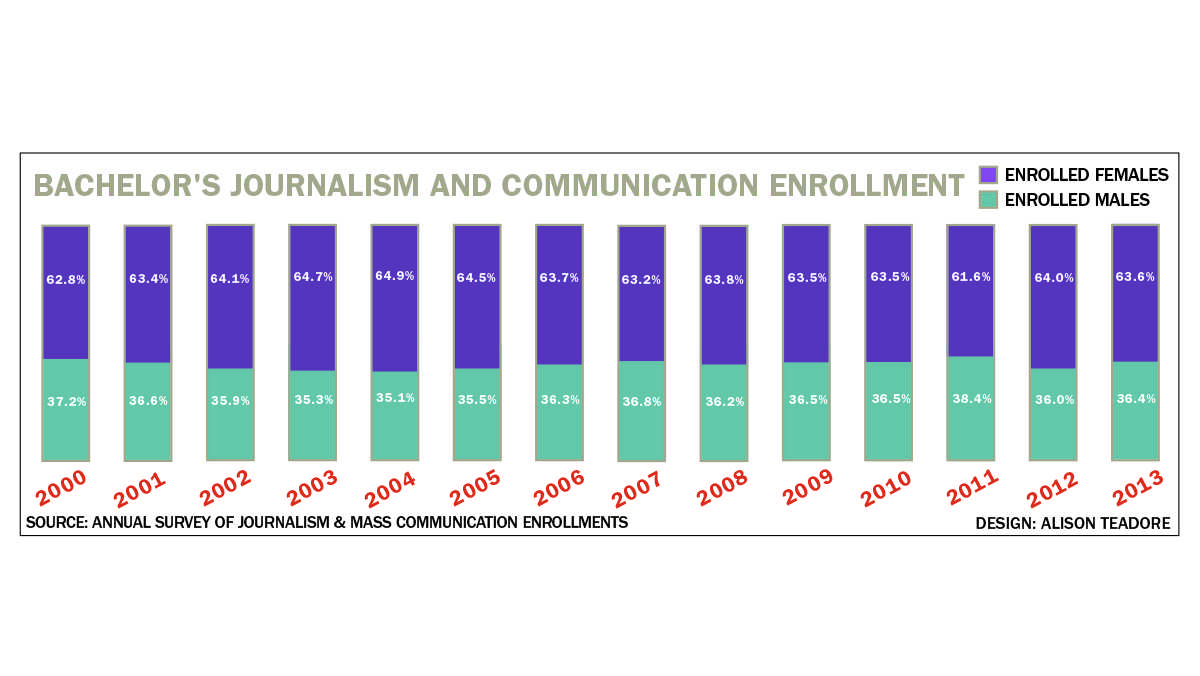 At Ithaca College, and in many other communications programs, it is not uncommon to find that women outnumber men in journalism classes. However, these trends are not reflected in the field of communications’ job market.

Sydney O’Shaughnessy, a sophomore journalism and environmental studies dual major, said she has noticed the dwindling number of male students in some of her classes in the Roy H. Park School of Communications.

“Since I started at Ithaca, the class I had the most guys in was three, and then one quit the class, so there were two guys,” O’Shaughnessy said.

National and international studies indicate that the enrollment rate of women in mass communication and journalism programs is much higher than that of men. Women constituted two-thirds of the students enrolled in bachelor’s degree and master’s degree communications programs in the fall of 2013, according to the 2013 Annual Survey of Journalism and Mass Communication Enrollments by professors at the University of Georgia.

At Ithaca College, there are approximately 129 females studying journalism and only 61 males, according to data from the Office of Institutional Research. Overall, there are 945 female students majoring in some form of communications in the Park School, and 640 male students, nearly matching the two-thirds ratio mentioned in the University of Georgia study.

The inverse occurs after these students graduate. In a review of 27,000 pieces of content from 20 widely circulated broadcast, print, online and wire outlets from October to December 2013, researchers at the Women’s Media Center found that men, on average, contributed 63 percent and women 36 percent of bylines and appearances, according to their study, “The Status of Women in the U.S. Media 2014.” The 2013 American Society of News Editors Newsroom Census showed in 2013, women comprised 36 percent of overall newsroom staff.

Lee Becker, director of the James M. Cox Jr. Center for International Mass Communication Training and Research at the University of Georgia and one of the authors of the enrollment study, said the high enrollment of female students in communications programs is something he has seen before.

“It’s a long standing trend, it’s not anything new,” he said. “I think it largely reflects the attractiveness of public relations, in particular in public relations and advertising, to female students. It’s not just the curriculum, but it’s the occupations as well.”

In a United Kingdom study called “Women in Journalism,” Suzanne Franks, a professor at the City University of London, stated women substantially outnumber men during journalism training and enter the profession in slightly greater numbers. However, once they reach this professional level, the pay gap between men and women still exists, and the higher, senior positions aren’t going to females.

Before Ithaca College alumna Jacqueline Palochko ’11 secured her job at The Morning Call, a newspaper in Allentown, Pennsylvania, she worked in several other newsrooms and said she noticed that most of the higher positions in these newsrooms were filled by men.

“When I went into journalism after college and I went into newsrooms, the majority of the newsrooms I have worked in have been very male dominated,” Palochko said. “I’ve worked at three newspapers after I graduated college, and at each one there had always been a male at the very top. At the newspaper I’m at right now, it’s a bigger newspaper and there’s probably still only a handful of women and mostly men in the newsroom.”

Also in Franks’ study, she states that one reason why women may not be reaching these higher positions is because as a society that still follows traditional, Western ideals, women are upheld to the standard that they must put family before a career.

Palochko said she has met female journalists who had to give up their careers in the field because it conflicted with marriage and family life. One of the reasons she chose to work in the journalism field was because she had the flexibility, but for some women, she said, this might not be the case.

“From personal experience and from talking to a few female journalists that I know, it kind of seems, and I think it’s really unfortunate, but it seems that sometimes women leave journalism when they get married or when they start having kids because it’s not a typical 9 to 5 job,” Palochko said. “And I think that maybe personal issues of family life come into that and kind of take women from going full speed ahead in their professions.”

When there is difficulty in upholding journalism positions, Becker said, women turn to open spots in mass communication professions like advertising and public relations.

“Women tend to be much more concentrated in advertising and public relations and the percentages, particularly in what used to be called broadcast journalism, are much more likely to be male,” Becker said. “Where it is hard for women to find jobs and develop careers is in traditional journalism.”

In regard to traditional journalism, Maura Stephens, associate director of the Park Center for Independent Media, said some women find success in working for independent newspapers and magazines outside of those in mainstream media. Stephens said female-driven magazines, like The Riveter Magazine, are still good examples of longform journalism, and magazines like this one allow women to write their own stories and create their own forms of journalism.

“A lot of women are doing a lot of entrepreneurial work because they’re not getting hired,” Stephens said. “Women recognize that we need a free and open media, we need journalism if we are ever going to have a government that works for us.”