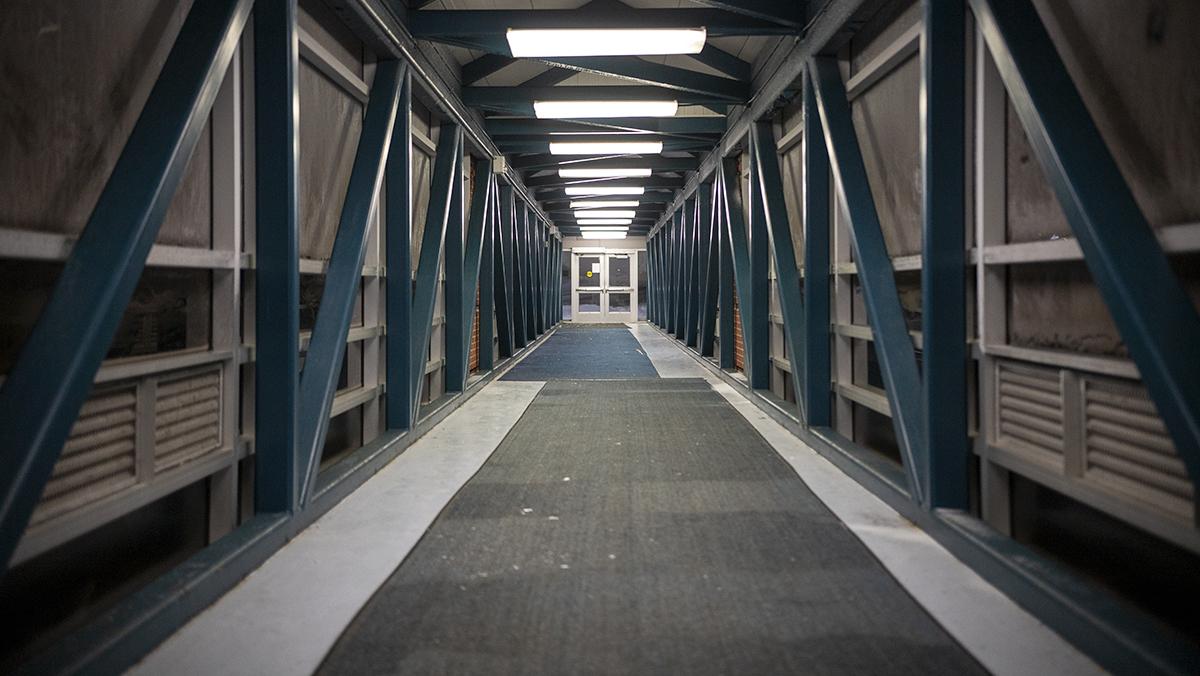 Brendan Iannucci/The Ithacan
On Feb. 3, a swastika was discovered drawn onto the condensation of a window in Ithaca College’s Baker Hallway.
By Elijah de Castro — News Editor
Published: February 4, 2022

On the night of Feb. 3, a swastika was found drawn into the condensation on the glass in Ithaca College’s Baker Hallway that connects the James J. Whalen Center for Music with the Towers parking lot (J-Lot).

“The vision of this institution is to build thriving communities, rooted in the values of equity, accountability, and respect, among others,” Cornish said in the email. “We cannot achieve this goal in an environment that tolerates antisemitic, racist, or other threatening symbols, words, behaviors, or ideologies.”

Cornish stated in the email that an incident report has been filed with the Office of Public Safety and an investigation into the incident is ongoing.

Hillel at Ithaca College also released a statement condemning this act of antisemitism.

“The swastika is often used to incite violence against Jews and can threaten Jewish students’ sense of safety,” the statement said. “We are grateful to Ithaca College’s leadership for the seriousness of their response.”

Antisemitic and racist incidents are not new to the college. In April 2019, swastikas were found on the doors to dorm rooms. In 2019, a student wrote a commentary for The Ithacan saying they had found their mezuzah — a prayer scroll with Hebrew verses from The Torah — ripped from their door.

The incidents come during a time of rising antisemitic incidents throughout the Western world. The American Defamation League found that 2020 was the third-highest year since 1979 for antisemitic incidents. On Jan. 22, Hillel and other religious groups held a gathering in the Bernie Milton Pavillion to mourn a hostage standoff at a synagogue in Colleyville, Texas.

Beginning in Fall 2021, Hillel began participation in Hillel International’s Campus Climate Initiative, which aims to create a positive campus climate in which Jewish students feel comfortable expressing their identities and values, free of antisemitism, harassment or marginalization. Hillel’s Feb. 4 statement said as a part of the initiative, the college conducted an extensive review of Jewish life at the college, which recently concluded.

“It is upon all of us to swiftly combat antisemitism and to ensure that our students have a strong Jewish home at Ithaca College,” the statement said.