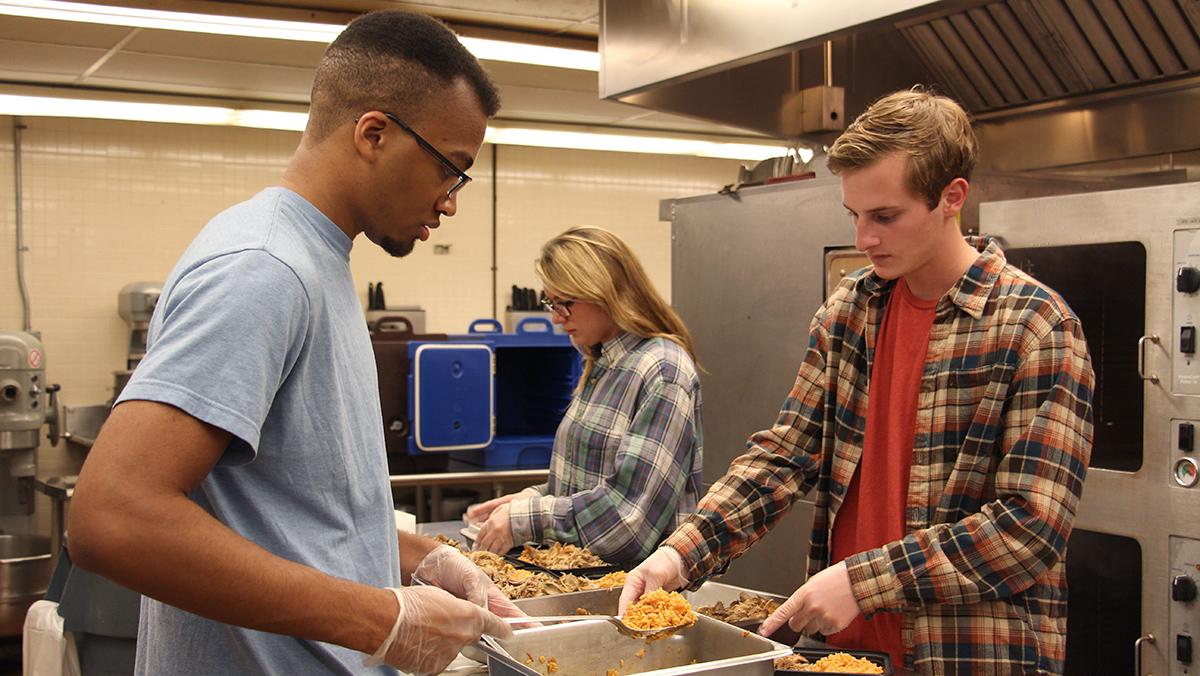 For Ithaca resident Frank Sears, food brought to the Ithaca Rescue Mission by groups such as Stop Wasting Ithaca’s Food Today (SWIFT), a project of the IC Environmentalists Club (ICE), makes a big difference. Sears has benefited from these donations for the past three years.

“It’s tremendous. We have a whole lot of people here that are in and out … and don’t have any money to buy food and don’t have any food,” he said. “That’s the kind of impact it has, to try to make sure that everybody gets something.”

Now, the club has added another day of food donation with the hope of doubling the amount of food it delivers.

About five students from ICE — which now oversees SWIFT — meet every Friday at 4 p.m. to gather surplus food from Towers Dining Hall and transport it to the Ithaca Rescue Mission, an organization dedicated to providing food and shelter to those in need. This semester, the group added an additional day of food gathering — every Thursday at Terraces. Junior Isabelle Sibley, president of ICE, said the expansion will help them achieve their goal of doubling the amount of food that they donated last semester, which was about 900 meals.

“Last semester, when we took over SWIFT, a lot of the students were interested in expanding the program,” she said. “They were seeing the food waste that was happening in other dining halls. And so we’ve really been working since last semester to really try and get the ball rolling.”

Sibley collaborated with Jeff Scott, director of Ithaca College Dining Services, over the summer to make the decision about expanding SWIFT, which formed in 2009.

“It just seemed like Terraces would be the next natural opportunity for us — we are closed for a couple of hours in the afternoon,” Scott said.

They are also working toward having a Sodexo worker drive the food that SWIFT packages to the Rescue Mission so students do not have to do the driving. This will reduce the time commitment that SWIFT volunteers will have to dedicate toward this work each week.

Scott said they are also considering opting into the national Food Recovery Network program, which describes itself as the largest student movement against food waste and hunger in the United States and currently has a chapter at Cornell University. This would not change how the organization runs but would simply connect it to a national movement.

Sophomore Tom McAuliffe, vice president of ICE, has been involved with the program since ICE took it over last semester. He said the people who benefit from the food deliveries have enough to worry about besides food insecurity.

“It’s nice to see people get something that’s a human right when they’ve had a lot of trouble in their life and need something to brighten their day and take at least one worry out of all the ones that they deal with on a daily basis,” he said.

Rick Bennett, the director of the Ithaca Rescue Mission, said none of the food that the organization receives is wasted.

“I think sometimes, clients just need to be reminded that there are people out there that care and want to help and support them as much as possible,” he said. “I think that knowing organizations like SWIFT are out there creates hope.”