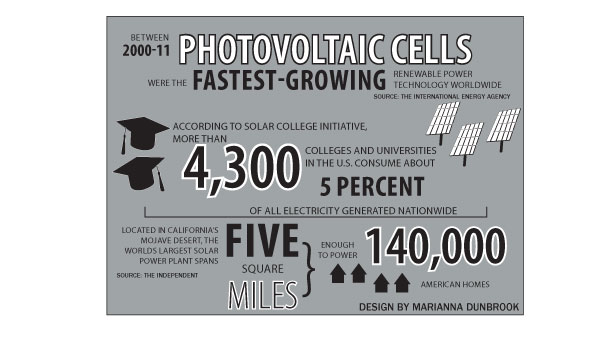 Tompkins Cortland Community College has plans to install 8,676 solar panels over 10 acres of land, creating a solar farm that will produce an estimated 90 percent of TC3’s energy supply.

James Turner, director of facilities at TC3, said in a press release that the solar farm will save TC3 approximately $30,000 in its first year of operation, and that he expects that number to grow assuming that utility rates continue to increase annually.

It’s estimated that the solar farm will help reduce TC3’s carbon dioxide emissions by more than 890 metric tons per year. The remaining 10 percent of energy needs will continue to be sourced from the energy grid.

A grant from the New York State Energy Research and Development Authority is covering the costs of the solar panels and construction. Turner said TC3 expects approval from the Town of Dryden in March and the NYSERDA’s construction deadline for the project is in September.

It is estimated that the solar farm will produce more than 3 million kilowatt hours of energy each year. Ithaca College used more than 2 million kWh each month in the 2010–11 fiscal year. However, TC3 is a smaller institution, with 3,384 undergraduate students enrolled in Fall 2013, as compared to the college’s 6,234 total Fall 2013 enrollment.

TC3 already has two solar arrays, or groups of solar panels, on campus. A smaller array serves for demonstration and research purposes, and a larger one is installed on the Student Center.

Ithaca College’s sole source of on-campus renewable energy, a geothermal system, only covers the climate control needs of the Peggy Ryan William Center. The system includes 36 500-foot-deep wells beneath the PRWC and takes advantage of the earth’s natural temperature to heat and cool the building. The building is heated during the winter when the ground is warmer than the air. During the summer, when the ground is colder, the wells serve as a medium to absorb heat.

Black Oak Wind Farm LLC plans to construct an 11.9 megawatt farm in Tompkins County this year, beginning with seven 1.7 megawatt wind turbines. Mark Darling, sustainability programs coordinator at the college, said though it has not been officially decided, the college hopes to source at least 10 percent of its energy from this new wind farm.

Marian Brown, special assistant for campus and community sustainability, said the college is increasing energy efficiency before implementing renewable energy systems. For example, the proposed 2013–14 budget shows plans to spend $3,648,114 on electricity. Brown said the college has determined it would be possible to build two industrial-sized wind turbines on South Hill, but estimates it would cost $4.5 million and cover only between 5 and 10 percent of the college’s energy needs. Therefore, she said, it would be more economical to reduce energy needs by 5 to 10 percent instead.

Brown also said it is important for the college to prioritize its expenditures, and sustainability isn’t always the primary concern.

Darling said a facilities energy manager is needed for expertise regarding the final decision on sourcing energy from Black Oak Wind Farm, as well as moving forward with installing rooftop solar systems on campus.

The college’s Climate Action Plan, a 40-year action plan to work toward 100 percent carbon neutrality by 2050, slates 2015 as the year the college should begin feasibility studies on installing renewable energy systems, Darling said.

“We need to start, and will start, looking at where we could use solar power,” Darling said.

Brown said the PRWC and the Dorothy D. and Roy H. Park Center for Business and Sustainable Enterprise were both designed to be receptive to rooftop solar systems.

She also said sustainability is a continuous improvement process, and that the college can do better with branding itself as sustainable.

“One thing I wish we were doing as an institution more is recognizing that the capsule of sustainability is part of our brand effort,” Brown said. “If we are going to say that to somebody that’s coming in the door as an expectation, then we need to be able to deliver it.”

She said it’s important to recognize the need for individuals in the process of becoming sustainable.

“I would love to see everybody on the campus understand that they have a part to play in this,” Brown said. “To actually just use what you need and no more.”

This article has been revised to reflect the following corrections. Correction, March 23, 2013: