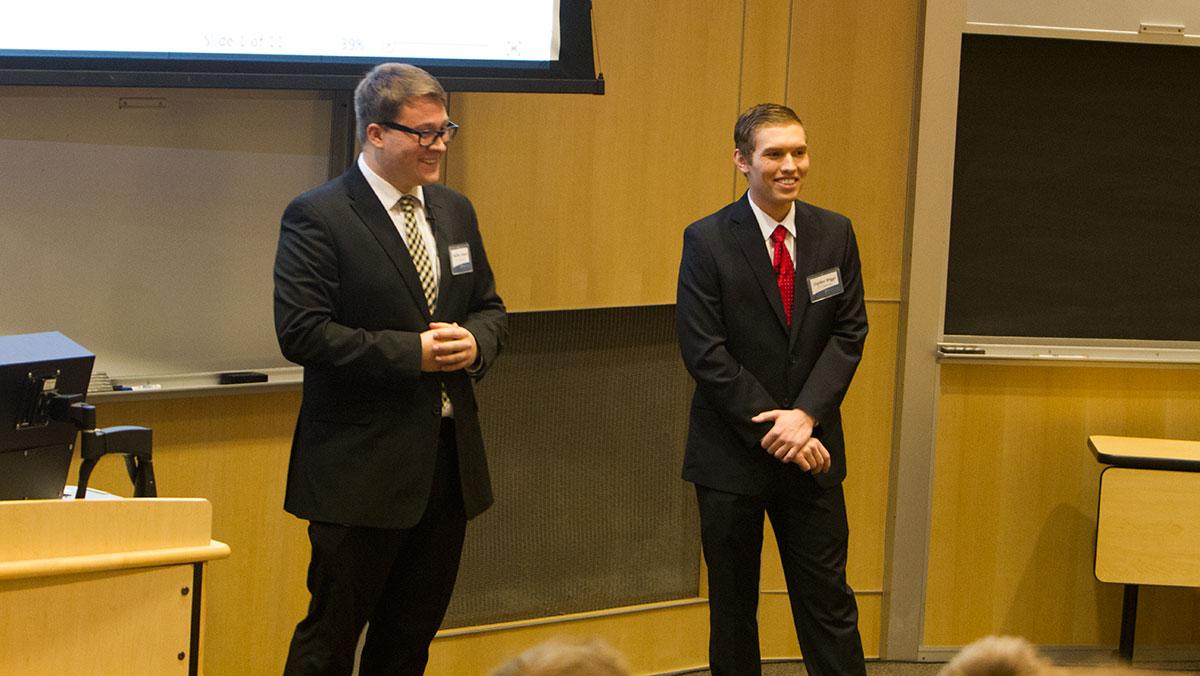 Carolyn Fasone/The Ithacan
From left: Seniors Andrew Sowers and Stephen Briggs were winners of the innovation track at the Business Idea Competition on Nov. 20. Sowers and Briggs created UV Clipboard, an application that uses cloud storage to copy and paste across devices.
By Yane Ahn — Contributing Writer
Published: December 3, 2014

Student entrepreneurs had the opportunity to pitch their business ideas to a panel of professionals and executives Nov. 20. The 12 groups, chosen from an original group of 27, competed for three possible first-place awards of $1,000 each.

The inspiration for the competition came from discussions in 2011 between Mary Ellen Zuckerman, former dean of the School of Business, and Christopher Burch ’76, who got his own start in business selling sweaters on campus while still a student.

Brad Treat, instructor of management, coached and supported the groups that presented at the competition. Many of the competing groups came from his class, Entrepreneurial Innovation. Treat said the students now tend to look off campus and identify problems that businesses could solve globally, and the business ideas continue to get stronger each year.

“I think, historically, students look at students’ problems, but now they’re saying, ‘Let’s think bigger,’” Treat said. “I think the big thing is that all this is possible because of an Ithaca College alumni who’s been so generous in his giveback. [Chris Burch] said, ‘Let’s enable this next generation of young entrepreneurs,’ … and since he did that we’ve launched an average of six businesses per year out of Ithaca College.”

The 12 groups were competing along three tracks: innovation, service and health. Four groups competed within each of these themes as it related to their business ideas. The judge panel consisted of Michael Axelrod ’91, co-founder of QuickMeds and partner of LiquidHub; John Alexander, founder of CBORD; Heather Lane ’10, owner of Purity Ice Cream; and Stephen Cohn ’89, co-founder and co-president of Sage Financial Group.

Axelrod said the judges try to look for ideas that are viable products that could generate revenue and income.

“There were a lot of ideas today that could do that, so it was really difficult looking through the categories to see which was the most viable,” he said. “I think people had a better vision of where they’re going to take their ideas this year than they have had in the past.”

The winners of the innovation track were seniors Andrew Sowers and Stephen Briggs, who created UV Clipboard, an application that uses cloud storage to copy and paste across devices. The app works as a synchronized clipboard, allowing users to record, save or utilize information more easily among devices.

“This idea was forged several weeks ago out of a need personally when I was working on a project in a group of people,” Sowers said. “I saw a need in everyday life. Why not take my skills I learned here at Ithaca College and apply them to fit that need?”

Briggs said he plans to update the look, design and feel of the user interface of the app, which is currently in beta testing. He also hopes to update branding and reach out to tech blogs to promote UV Clipboard. The team plans to work with the money from the competition to get the app running before the spring semester.

The winners of the health track, senior Katie Deitz and junior Cody Stahl, aim to develop their program, Gym View, which allows users to check the status of gym equipment that is registered with the website.

“We want to take it forward next semester and hopefully enter the Business Plan Competition in the spring and kind of see where we go from there,” Deitz said.

The two expressed concerns over costs, as the domain name of GymView.com is around $1,795. However, Deitz said they want to make their idea into a reality as it received a great amount of support on campus.

“Really the idea is that, no matter what, we get this out in the market because this is something every college student has discussed,” Stahl said. “Whether or not they go is on the students. At least you can see if [the gym equipment] is free.”

Junior Daniella Raposo, senior Eliza Diament and sophomore Kat Fischer won the service track for their app concept, On Set, which allows people to use sound recognition software to identify movie trailers that are shown in the theater. The app will then provide users with information and updates related to that movie trailer after they leave the theater.

“I was sitting in a movie theater one day, and by the time I walked out of the theater I realized I could not remember any of the trailers I had watched,” Fischer said. “I wanted to create something that would help [people] remember movies.”

Diament said they hope to make it a viable product in the marketplace, especially after receiving positive feedback from fellow students and the judges.

“We might consider taking it to a regional competition, which last year was at Binghamton University, and hopefully we’ll be able to progress to states,” Diament said.