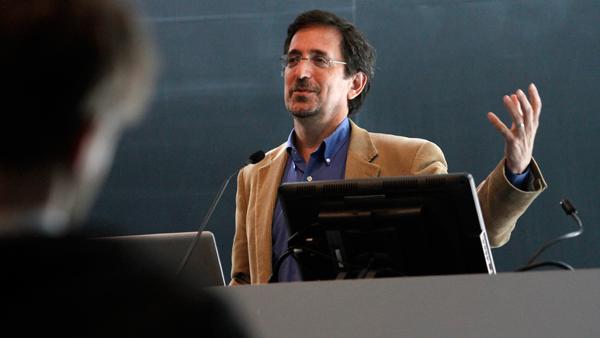 Environment reporter and blogger Andrew Revkin of the New York Times’s Dot Earth gave a public lecture focused on climate change and the issue of natural gas extraction, the latter of which ignited a series of questions and comments from the audience.

Revkin’s presentation, “Important Science in an Urgent Age,” Sept. 24 at Cornell University was part of Cornell’s Atkinson Center for a Sustainable Future speaker series, Outside Voices.

Drew Harvell, professor of ecology and evolutionary biology at Cornell, acted as moderator for the event. She said the event was streamed live, which allowed for more interaction beyond the packed audience of about 200.

“I was really happy with the turnout,” Harvell said. “This is something new for us. This is the second in our Outside Voices series, and we haven’t done online, live discussion format like this before.”

Revkin worked as a reporter for the Times from 1995 to 2009, but first covered the issue of climate change in the form of sea level rise in 1988. He currently writes for Dot Earth, a blog in the New York Times, and is a senior fellow at the Pace Academy for Applied Environmental Studies at Pace University.

He discussed science communication and the need to break down barriers between people who have polarized themselves on an issue, such as fracking, a process of natural gas extraction.

However, he said the more information that is made available, the more polarized people become in their beliefs. For instance, Revkin played a short video he made about fracking that included images of workers drilling on a fracking site, then cut to a farmer talking about the benefits of leasing his land.

Revkin’s point hit home, as many members of the audience raised their own concerns about fracking during the question and answer period of the lecture.

K.C. Alvey, a Cornell graduate, questioned Revkin on his reporting of fracking.

“I’d say your reporting fails to question why there are divergent views and the power dynamics at play in those opposing views,” Alvey said to Revkin. “What do you think has been the major impediment to climate action in the U.S., if not influence of the fossil fuel industry?”

Revkin, who has reported about the politics behind natural gas, responded by noting his coverage of the Halliburton loophole, an exemption to water testing as part of the Energy Policy Act of 2005. Alvey said later she felt her question wasn’t really answered, and said she wasn’t surprised.

One audience member’s reaction to Revkin’s lecture received applause by the audience members. Assemblywoman Barbara Lifton, D-N.Y., noted her history as a supporter of the anti-fracking movement when she voiced her concern for Revkin’s apparent support of natural gas drilling.

“This is massive environmental destruction, this is destruction of water,” Lifton said. “So when you say New York ought to do this because we use gas, I don’t find that a satisfactory answer.”