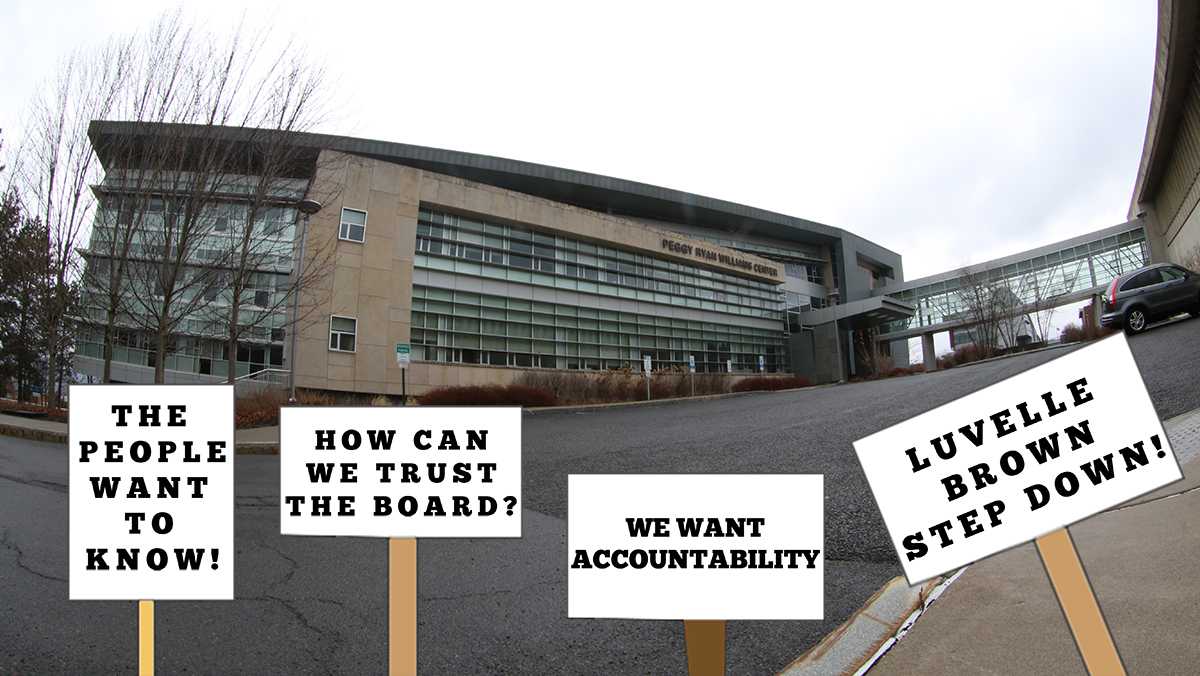 The board of trustees holds immense power at the college. It is responsible for hiring the college’s president, approving the college’s budget — which includes tuition and fees — monitoring the college’s finances, authorizing proposed changes to academic programs and major initiatives, committing to philanthropy at the college, and approving faculty appointment, promotion or tenure policies. Along with making decisions that impact 5,400 students and 646 faculty members at the college, Luvelle Brown also oversees the education of about 5,000 Ithaca-area students in the ICSD.

Luvelle Brown did not respond to a request for an interview.

Anjanette Brown, who shares two children with Luvelle Brown and is his ex-wife having initiated divorce proceedings in 2013, and Peyi Soyinka-Airewele, professor in the Department of Politics at the college, have been working to ensure that Luvelle Brown is held accountable for his alleged abuses, and to ensure the privacy and safety of the Browns’ school-age children.

Leadership at the college has been made aware of Luvelle Brown’s alleged abuses, yet he has remained in his position. This is indicative of a pattern of overlooking allegations of abuse leveled against high-level members of the college’s administration.

In 2001, former President Shirley M. Collado pleaded no contest to a sexual abuse charge after a patient whom she had been living with while she was their therapist accused her of sexual abuse. Collado has denied having any sexual contact with the patient. The board of trustees and the Presidential Search Committee were aware of the accusations against Collado and her no–contest plea when they appointed her to the presidency.

Collado served as president from February 2017 to August 2021, when she resigned. Collado stayed at the college until January 2022 to serve as senior adviser to the president and board. She then left to become president and CEO of College Track, an organization that helps students who face systemic barriers earn bachelor’s degrees. After The Ithacan published an article about Collado’s no contest plea in 2018, many members of the campus community voiced their support for Collado.

In February 2020, Child Protective Services (CPS) began an investigation regarding a physical injury that Luvelle Brown’s 8-year-old son sustained Feb. 23, 2020, which included several bruises and pain in the throat.

The injuries occurred after a church service when Luvelle Brown was picking up his two children from Anjanette Brown at the Shops at Ithaca Mall. Security camera footage obtained by The Ithacan shows both children as being reluctant to go with him, and when his son attempts to run back to Anjanette Brown, Luvelle Brown grabs the boy and struggles with him for a moment before carrying him out to the car. Luvelle Brown then uses the boy’s body to push open two sets of doors. The Cayuga Medical Center report of these injuries states, “I asked him how it happened a [sic] told me his father grabbed him and scratched him and squeezed his neck.”

The CPS investigation determined the allegations were unfounded, but Anjanette Brown said this is because of unethical actions on the part of Luvelle Brown and CPS. Anjanette Brown claims the social worker investigating the case was instructed by superiors to inform Luvelle Brown of the investigation before speaking to the children. Sources in the school, including Principal Liddy Coyle, told Anjanette Brown that Luvelle Brown pulled the children from the classroom to talk to them before they were interviewed by CPS. According to a recorded conversation between Anjanette Brown and her son that was obtained by The Ithacan, the son tells Anjanette Brown that in this conversation with Luvelle, he first reminded the child of the toys he bought him the day of the alleged physical assault and then told him that people were spreading lies about him. The children were interviewed by CPS in the principal’s office and they did not disclose anything about the physical abuse, but during a second interview outside of school they told the same social worker that Luvelle Brown had inflicted the injuries on the son. Soyinka-Airewele said she was at the church with Anjanette Brown and others when the alleged physical assault occurred, and she witnessed the struggle to get the kids to leave with Luvelle Brown. Despite this, nobody from the group including Soyinka-Airewele was interviewed by CPS, and the case was dismissed. 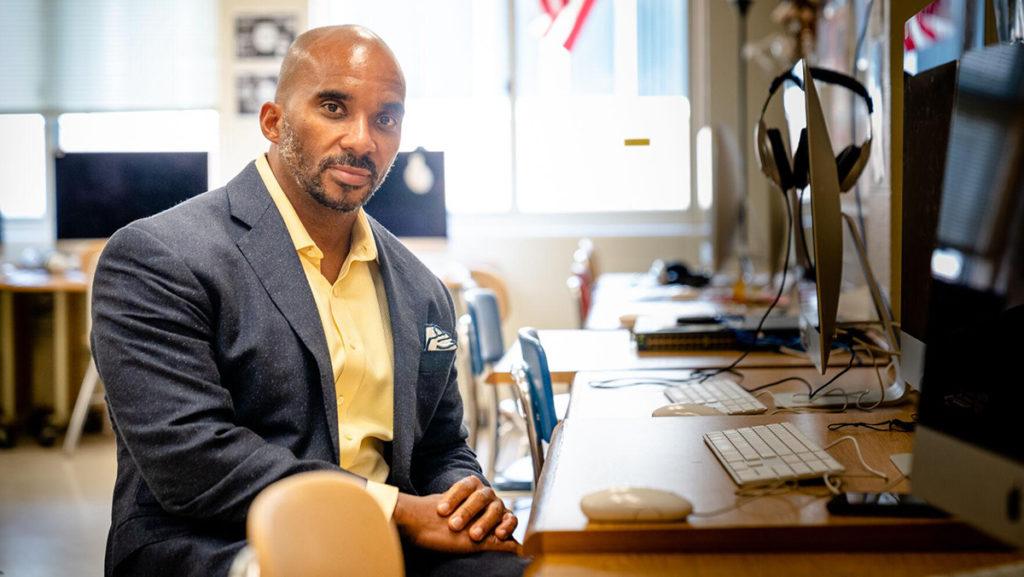 Despite facing credible allegations of abuse, Luvelle Brown holds power at the Ithaca College Board of Trustees and as superintendent of the Ithaca City School District. Photo by Casey Martin/Courtesy of Ithaca Times

Following the alleged incident of physical abuse against the son, a judge ordered Luvelle Brown to not contact his children at school in any manner outside of his role as superintendent. Despite this, Caren Arnold — who was the boy’s teacher at the time — said Luvelle Brown entered Arnold’s classroom Feb. 28, 2020 five days after the alleged physical assault to give his son a bag of candy, which was in violation of the court order. This caused emotional distress for the boy, who then attempted to hide, according to a recorded conversation between Anjanette Brown and Arnold.

Emails obtained by The Ithacan between Anjanette Brown and the children’s court-appointed law guardian show that Coyle was aware of the court order. However, in her February 2021 affidavit, Coyle claims that she was not informed of the directive.

“And the board has to be accountable,” Anjanette Brown said in her message. “Our community kids can’t continue to suffer this. I am just shocked.”

“I don’t know if that will ever happen but they all need to resign,” Coyle said in her message.

“I agree but it happened and thank you for having my back!!!!!!” Anjanette said.

“Yes indeed,” Coyle said. “YOU made this happen thank you!”

However, in Coyle’s Feb. 10, 2021 affidavit, which was obtained by The Ithacan, Coyle denied having knowledge of several issues which she had spoken about with Anjanette Brown. It is unclear what may have happened to cause Coyle to backtrack and deny knowledge of these issues, but she had previously acknowledged in conversations with Soyinka-Airewele that she may face consequences like losing her job for supporting Anjanette Brown.

Anjanette Brown also said her son received minimal assistance in his education despite doctors recommending that he receive additional services, and as a result he did not show progress in improving his skills and his performance in school. She said Luvelle Brown specifically refused to have an Individualized Education Program implemented despite a doctor’s recommendations, according to a recorded conversation between Anjanette and Luvelle Brown and the son’s doctor obtained by The Ithacan. Luvelle Brown allowed his son’s teachers to let him use voice-to-text devices instead of encouraging him to practice writing, which was one of his primary challenges academically. Anjanette Brown said this was one of the reasons why she had her children transfer to a local private school. Her son has shown significant progress in his education now that he has adequate resources like an occupational therapist.

“When I changed the kids’ school they were just so happy,” Anjanette Brown said. “They had such a hard time at ICSD and both of my kids said, ‘We just get to be ourselves here, it doesn’t matter who we are.’ That coming out of their mouth was so good to hear.”

Anjanette Brown also accused Luvelle Brown of making an unethical decision in hiring Erica Keuffer as his administrative assistant in 2015 because she was the paralegal for the law guardian appointed to advocate for their children during their divorce process. Keuffer was still in this position when she applied for the job at ICSD. Keuffer admitted in her deposition to having a romantic relationship with Luvelle beginning two months after she was hired at ICSD, and she claimed she and Luvelle Brown never discussed his children’s custody case. She also recalls interacting with Luvelle Brown during her time as a paralegal, but Luvelle Brown states in his affidavit that he had never spoken to Keuffer before she was interviewed for the job at ICSD.

Anjanette Brown then appealed to the New York State Education Department (NYSED) on Jan. 31, 2021 with the same complaints. The NYSED did not review the complaints against Luvelle Brown or the appeal to have him and others removed from their position because the petition was not served within 30 days of the acts complained of. This is required in compliance with Section 275.16 of NYSED’s Regulations of the Commissioner.

Anjanette Brown has been representing herself in this matter with the help of Soyinka-Airewele and she said this has made it difficult for her to be successful in her petitions. Two pro–bono lawyers have attempted to help with the case, but Anjanette Brown said it was difficult to coordinate their schedules and she is not able to afford a lawyer. She has also faced resistance from the ICSD Board of Education, with Robert Ainslie, president of the board of education, refusing to accept the service of official documents. A video shows him throwing the documents in the snow.

Luvelle Brown and the ICSD Board of Education also ignored a cease and desist from Soyinka-Airewele and Anjanette Brown after Lily Talcott, deputy superintendent of ICSD, released personal information about Brown’s children in her affidavit which is publicly available. This included photos of the children and information about the children’s behavior at school. This is not a violation of the Family Educational Rights and Privacy Act (FERPA) because these are not educational records, and they were released as part of a court proceeding. However, this personal information about both children is now publicly available despite Anjanette Brown’s objection.

Activism organizations at the college like the Open the Books coalition and IC Alumni Against Austerity have been working with Anjanette Brown and Soyinka-Airewele to make the college community aware of Luvelle Brown’s alleged abuse and to demand his resignation. A petition created in February 2022 by IC Alumni Against Austerity is demanding for Luvelle Brown to step down. It has received 268 signatures as of April 6.

However, the NYSED determined that the issue is not solely a personal matter. This was said in its decision regarding the ICSD Board of Education’s response to complaints filed against Luvelle Brown.

“I acknowledge, as petitioner asserts, that respondent board’s characterization of her complaints as ‘relat[ing] to an ongoing family dispute’ improperly minimizes the nature and extent of her allegations,” the decision states.

On Jan. 5 2021, Soyinka-Airewele sent a letter to Betty Rosa, New York state Commissioner of Education, which detailed the allegations of abuse leveled against Luvelle Brown and expressed concern about the ICSD Board of Education’s refusal to conduct an investigation into the accusations that have been made about Luvelle Brown’s conduct.

In January, Eversley Bradwell told the Ithaca Times that the ICSD board of education had conducted an investigation, but found that many of the claims were not of merit, or that they were out of the influence of the school district.

Despite this, Luvelle Brown has been praised for his work as superintendent. He has received the Dr. Effie H. Jones Humanitarian Award from the School Superintendents Association. This award honors superintendents who are committed to creating an equitable educational environment for vulnerable children and to the advancement of women and minorities in leadership. Effie H. Jones, for whom the award was named after, created spaces where the differing needs of children could be addressed.

On top of caring for her children and working on these petitions, Anjanette Brown said she has tried to make sure that her children do not know about these proceedings and the dispute between their parents.

“Childhood is such a protected space of life, and that space of life goes with you for the rest of your life,” Anjanette Brown said. “As a mental health counselor, I see it all the time with clients, so I really wanted to be careful to not bring that into them.”