Tuition may rise as result of NY budget proposal

In a budget proposal that aims to close the state’s $10 billion deficit, Gov. Andrew Cuomo announced cuts in funding for private schools such as Ithaca College that will likely increase tuition and room and board fees. 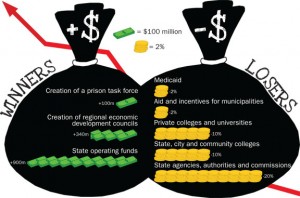 If approved by the state legislature, Cuomo’s $132.9 billion budget will take effect April 1, when the next fiscal year begins. The budget includes a reduction of 2.7 percent, or $3.7 billion, in government spending, including state aid cuts to the City of Ithaca for the 2011-12 fiscal year.

Carl Sgrecci, vice president of finance and administration, said state funding to the college would be cut by 10 percent if the budget is enacted.  The reduction would shrink the college’s Bundy Aid, which Sgrecci said is a program that provides direct financial aid based on the number of students the college graduates.

The college’s Bundy Aid has declined substantially over the past 15 years, when Sgrecci said the college collected as much as $2 million annually.  He said the state legislature has since decided to decrease public funding to private colleges and universities.

“On an overall college budget of about $208 million, $60,000 is a very small amount, particularly when you compare it to the magnitude of the cuts the SUNY and community colleges are facing,” he said.  “In the college’s long-term financial planning, we have assumed this amount of aid is gradually going to go away all together anyway.”

Cuomo’s budget also includes a decrease of $53,000 in aid to the City of Ithaca, lessening the city’s state aid total to an estimated $2.6 million.  Ithaca shoulders an approximate $3.5 million deficit in a general fund budget of around $50 million.

Alderwoman Jennifer Dotson, chair of the Common Council’s Planning and Economic Development Committee, said she is upset with the governor’s budget cuts, given the estimated $3.5 million deficit of the city.

“It’s very unreasonable to then pass on that [budget] problem to localities, to transit systems, to those who really can’t afford to take those cuts, to lay off people, et cetera,” she said.  “It’s really, really disturbing to me.”

Dotson said the city’s lawmakers and Mayor Carolyn Peterson met on Jan. 31 to discuss budgetary priorities for 2012.  Dotson said these meetings generally don’t begin until the fall, but the city’s current fiscal woes have created a sense of urgency.

Dotson said she fears cuts in Ithaca state aid will force City Hall to discuss the potential of laying off some of the 400 city workers Ithaca employs.

The council members are considering the possibility of furloughs or shortened workweeks for city workers to avoid layoffs, Dotson said. She also questioned whether the city will be able to sustain important services, such as garbage pickup and snow removal.

“New York is at a crossroads, and we must seize this opportunity, make hard choices and set our state on a new path toward prosperity,” he said. “We simply cannot afford to keep spending.”

Ferguson said for economic development to continue, job growth is necessary to expand the tax base, which allows governments to provide the funds for public services.

Though the proposed budget does not alter Tuition Assistance Program funding, it pledges to cut aid to state and city universities and community colleges by 10 percent.  In addition, Cuomo left the door open for the dismissal of as many as 9,800 state employees if union members cannot reach a wage agreement with him.

“This state’s deficit was caused partly by the national recession,” he said. “But it was also caused by the very simple fact that our government spends too much money and has for too long.”