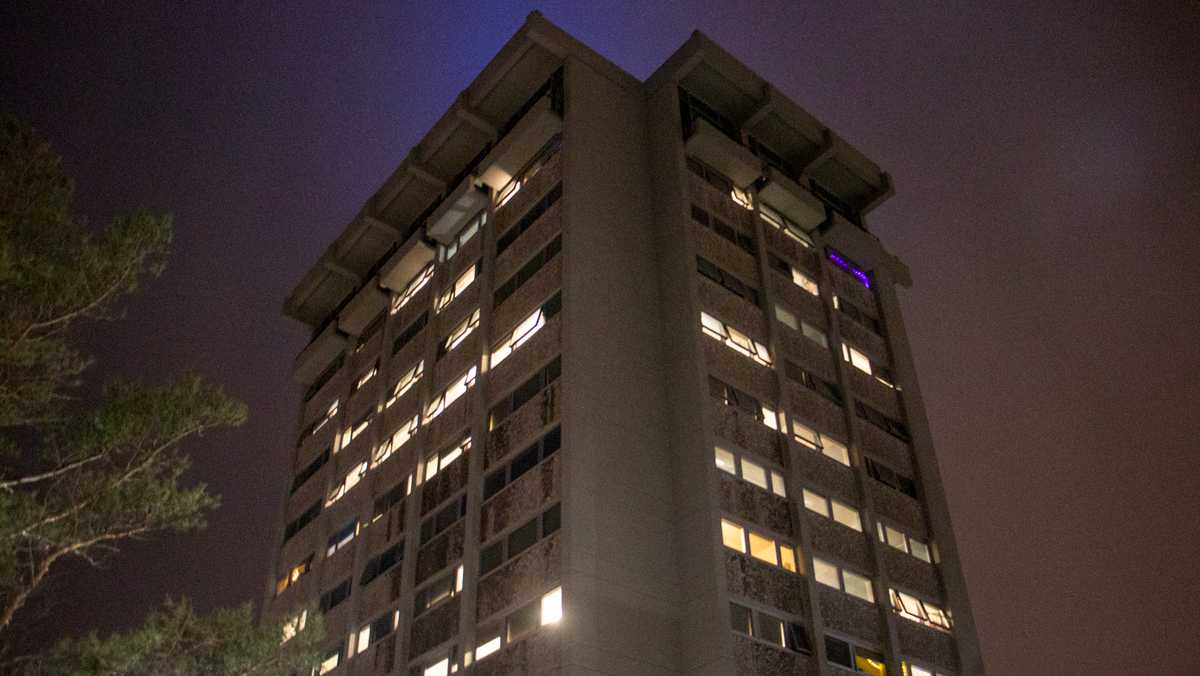 Julia Cherruault/The Ithacan
Residents of West Tower are now able to return to their rooms following flooding that occurred Nov. 30. The flooding was caused by a student breaking a fire sprinkler in the building.
By Rachel Heller — Staff Writer
Published: December 5, 2018

Residents of the 10th floor of West Tower at Ithaca College have moved back into their dorms after they were displaced by a flood that occurred Nov. 30.

Five rooms on the 10th floor of the residence hall experienced water damage because a student snapped the head off of a fire sprinkler. The residents could not return to their rooms until the college’s Office of Facilities staff finished extracting the water. Students were instructed that they could stay in friends’ dorms or in certain rooms on campus that the Office of Residential Life confirmed were vacant.

Ronald Trunzo, director for Residential Life and Judicial Affairs, said the residents received an email Dec. 1 that their floor would reopen at 5:30 p.m., with the exception of three rooms that did not finish drying. The residents of the three rooms were able to move back to their rooms 4 p.m. Dec. 2.

Trunzo said the cleanup process for removing the water went smoothly. The water was extracted in time for the majority of students to return to their rooms a day earlier than he expected.

“Facilities staff began extracting the water from carpets shortly after the incident happened and then set up blowers to help dry out the floor and carpets,” he said.

Freshman Julia Henderson said she moved back into her dorm on Sunday. Henderson and her roommate stayed in a hotel while they waited for their floor to open because they thought it would be easier than bringing all of their belongings to another residence hall.

Henderson, whose dorm was one of the rooms that received water damage, said a few items  n her dorm floor were soaked. Students were informed at a floor meeting Dec. 1 that they should contact their personal property–insurance provider or their renters insurance company if their personal property was damaged, as the college will not cover the damaged items.

“Thankfully my laptop is working even though it was in my backpack that was drenched because it was on the floor,” Henderson said. “Other than that, just a few shoes are ruined, and I just had to wash the other things that were on the floor.”

Freshman Colin Shust said he and his roommate both stayed in a room in Emerson Hall while their floor was cleaned. Shust said his room was one of the rooms that did not experience any water damage.

Shust said the only inconvenience he experienced after the flood was moving his clothes and belongings from West Tower to Emerson Hall.

“The people whose rooms were flooded had it much harder than myself,” he said. “All their stuff was put in bags and had to dry out all weekend. There is still a lot of furniture and other stuff in our lobby.”