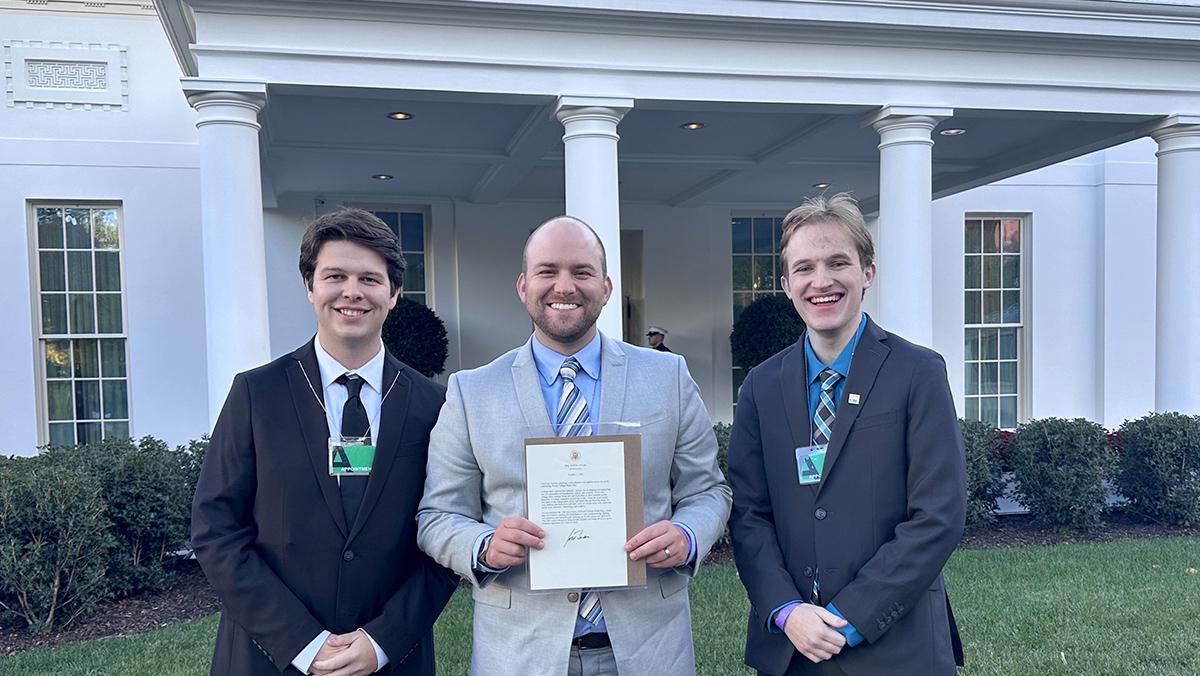 “I was DJing — I was doing the Hobo’s Lullaby, which is our Tuesday morning folk show — and Jeremy Menard, [television and radio operations manager], just walked into the studio and said, ‘Are you doing anything tomorrow? You want to go to the White House?’” senior Connor Hibbard, station manager for WICB, said. “And then 18 hours later, we were in the White House.”

On Oct. 19, Hibbard, Menard and senior Andy Tell, station manager for VIC radio, attended a College Radio Day event at the White House that was hosted by the Biden-Harris Administration. The event was a continuation of the 12th anniversary of College Radio Day, which was held Oct. 7.

“I’ve never been invited to the White House before,” Tell said. “And I don’t know too many people that have been, so when the opportunity came to go to the White House — whether or not it’s, like, to meet someone high up or just for some random press briefing — you got to take that opportunity, no matter how short of how short notice it is. It’s one of those once in a lifetime events you just have to say yes to.”

At the event, the students and respective student media advisers toured the Eisenhower Executive Office Building and the White House’s Brady Press Briefing Room. They also heard from a variety of speakers, including Karine Jean-Pierre, assistant to the president and press secretary; Bharat Ramamurti, deputy director for the National Economic Council; Sheila Nix, chief of staff for the Department of Education; Jennifer Molina, senior director of Coalitions Media at the White House; and Nick Conger, senior adviser for the Climate Policy Office.

Hibbard said the speakers talked about topics including climate change and student loan debt relief. He said a key takeaway he appreciated from the speakers was their message about the importance of keeping people informed.

“Karine Jean-Pierre … was about to speak,” Tell said. “She was at the front of the room and she got like three words in and then suddenly, Kamala Harris just burst into the room, interrupting our meeting. And instead of Jean-Pierre speaking, Kamala spoke, which was just incredible hearing her speak — she gave a really profound 15-minute speech about how important radio and college radio specifically is to students and for other people in communities and for building up communities.”

Tell said Harris also hosted a spontaneous Q&A session with the students who attended the event, where they were allowed to ask unvetted questions.

“She’s a gifted speaker, and she spoke to us with dignity and respect; never talked down to [us] because we’re students or anything,” Hibbard said. “Obviously, she’s a little higher up on the power hierarchy than we are. But she never talked down to [us] and she [was] never condescending. She never minces words. Her speech was really enlightening. And that was just a surreal moment I’ll never forget.”

Tell, Hibbard and Menard all said they were honored to be able to represent their respective radio stations and the college as a whole.

“Being the adviser for both [Hibbard] and [Tell], the highlight to me was just seeing how much joy they had throughout the whole event,” Menard said. “I think about what I would have been like if I was a college student in the White House like that, and I would have been over the moon. Seeing their reactions, [Hibbard] and [Tell], I think they had a smile on from when I met them at 6 a.m. to when we came back the next day.”