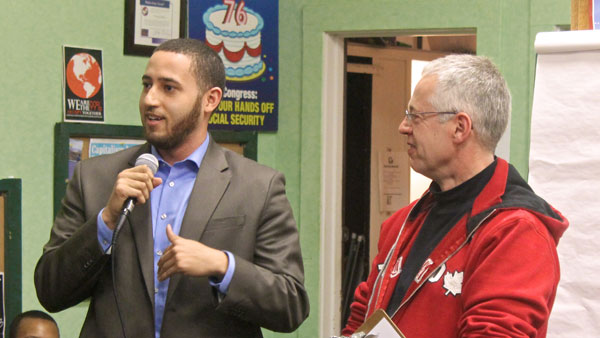 Community members, local government officials and business owners gathered on Jan. 29 at the Tompkins County Workers’ Center to celebrate recent achievements for living wages in Ithaca. While the event applauded the successes made so far, many community leaders spoke of ways to further raise the minimum wage.

Last December, the City of Ithaca achieved a Living Wage Certification from the TCWC. As a result, all non-contracted workers for the city are paid at least $12.62 an hour.

With more employers getting certified, the Tompkins County Legislature decided in December to grant a $100,000 fund to help the businesses in Ithaca that are struggling to factor living wage into their 2014 budgets. From this fund, the TCWC hopes to increase this amount as more employers in the county become living wage certified, Pete Meyers, coordinator of the TCWC, said.

The event also celebrated the 94 certified living-wage employers in Tompkins County. Many of the owners of these businesses participated in the event. Others who attended the celebration are working to become certified by the TCWC. Ithaca Mayor Svante Myrick said he believes that talking with the businesses will help increase the amount of living wage employers.

“We are asking as many businesses as we can to take care of their own employees,” Myrick said. “We can’t force them to, and we can’t incentivise them to, all we can do is ask them to.”

Don Barber, supervisor for the town of Caroline, N.Y., reported that Caroline will be applying to become living wage certified after years of working toward having all town employees paid above living wage. Barber attributed much of that progress to the TCWC.

Several other speakers discussed change in wages at a higher level, hoping to see the movement spread across the United States. Stanley McPherson, a member of the TCWC and a worker in Ithaca, suggested coming together to fight for a national living wage.

“It’s all in scription what we can do, and that is unity,” McPherson said. “This is what we are geared up to do. We can make it happen.”

The celebration ended with a folk sing-along to “Which Side Are You On?” made popular by the recently deceased Pete Seeger and a chant about workers led by a Cornell University graduate student.

The TCWC continues to strive for living wages for all employees in Ithaca and is working to branch out to support other counties in doing the same. Meyers stressed the importance of workers for the movement in a simple way.

“I can sit here and say, ‘Living wage for all!’ and stand out on The Commons and do all that, but you know what? That’s not going to actually go anywhere,” Meyers said. “It’s actually going to be the workers themselves that stand up and say that.”