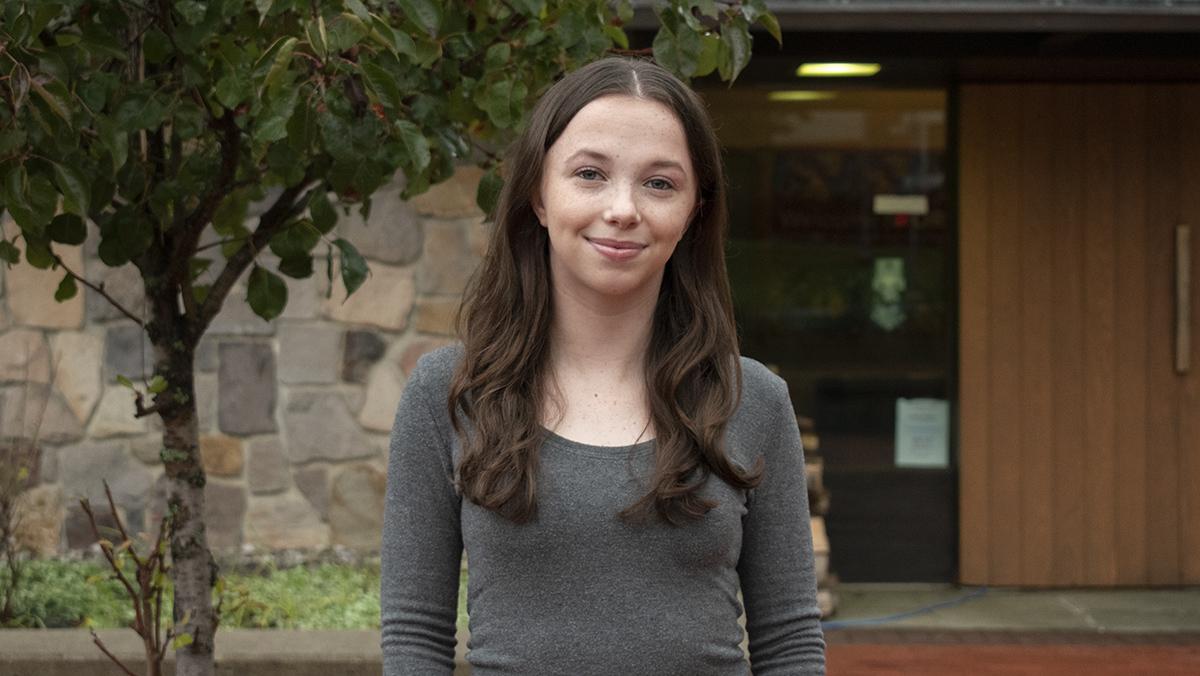 Nolan Saunders/The Ithacan
Junior Amanda Nadel discusses the importance of all religious holiday observances at Ithaca College. She talks about being put in the position of having to skip classes and miss work so she can observe her religious holiday.
By Amanda Nadel
Published: October 6, 2021

Ithaca College needs to implement policies where all major religious holidays are considered in its academic calendar. As a Jewish student at the college, I have been put in the position of having to decide to skip classes for the religious holidays. My first time this year having to make that choice was Sept. 16, Yom Kippur— the Jewish Day of Atonement, and the holiest holiday for Jews. Jewish students represent 17% of the student population, yet the college only gave students an excused absence and nothing more. Members of the Jewish community at the college were forced to work around their schedules and fall behind in classes in order to observe the holiday. I felt conflicted because I have always observed this holiday, yet I couldn’t fully commit to it because I was concerned about my school work.

According to New York state law, students can be excused from classes or exams for religious observances. However, students should not have to overwhelm themselves with trying to keep up in class. If students are not given the necessary accommodations, such as not having homework and recorded Zoom classes, then the holiday becomes more of a burden than an observance.

Although excused holiday absences are vital, they are only the first step in recognizing all major religious holiday observances. For Jews, this means Rosh Hashanah and Yom Kippur. Many of my Jewish friends feel like outcasts in the classroom when observing religious holidays. They are too busy keeping up with their fast-paced courses that they do not bother to raise the issue. I have heard similar frustrations from my friends of other faiths.

This year, the Ithaca City School District decided to start the school year one day late, so it would not conflict with the first day of Rosh Hashanah. The Jewish population of Ithaca is only 1%, yet the district recognized the importance of these holidays in its community. How is it that Ithaca College has a significantly higher Jewish population percentage but does not want to make additional accommodations for those observing religious holidays?

I understand that the college’s academic schedules are very structured and that giving days off can affect the entire course outline. However, I believe that the college can implement new rules for all religious holiday observances. First, the college can continue classes, but faculty should not assign additional homework on specific religious holidays, students would only need to catch up on class material under this recommendation. Second, professors should automatically record Zoom classes for every holiday. This would allow students to receive the same lessons as their classmates. Third, faculty needs to provide leniency with exams on holidays. Discussions between professors and students then need to occur so that compromises can be made. Finally, a special academic calendar for professors listing all major religious holidays should be created by the administration so that faculty are mindful of these dates when planning their syllabi.

What is being proposed here is practical. Many universities do not have religious affiliations that accommodate religious students, but some do offer special accommodations. Specifically, Binghamton University is one of these schools where classes are not held on Rosh Hashanah, Yom Kippur or the first two days of Passover, and it is less than an hour away from Ithaca College.

In 2019, the college implemented the Ithaca Forever strategic plan, making a number of community commitments. The goal is to “Become a national model for colleges committed to the values of diversity, equity and inclusion.” While this commitment is focused on diverse conversations and diversifying the college curriculum, it does not seem to address religious diversity and inclusion on campus. When a significant minority community has been impacted culturally and indirectly academically on campus for almost 50 years, when do we consider this a campus-wide equity issue?