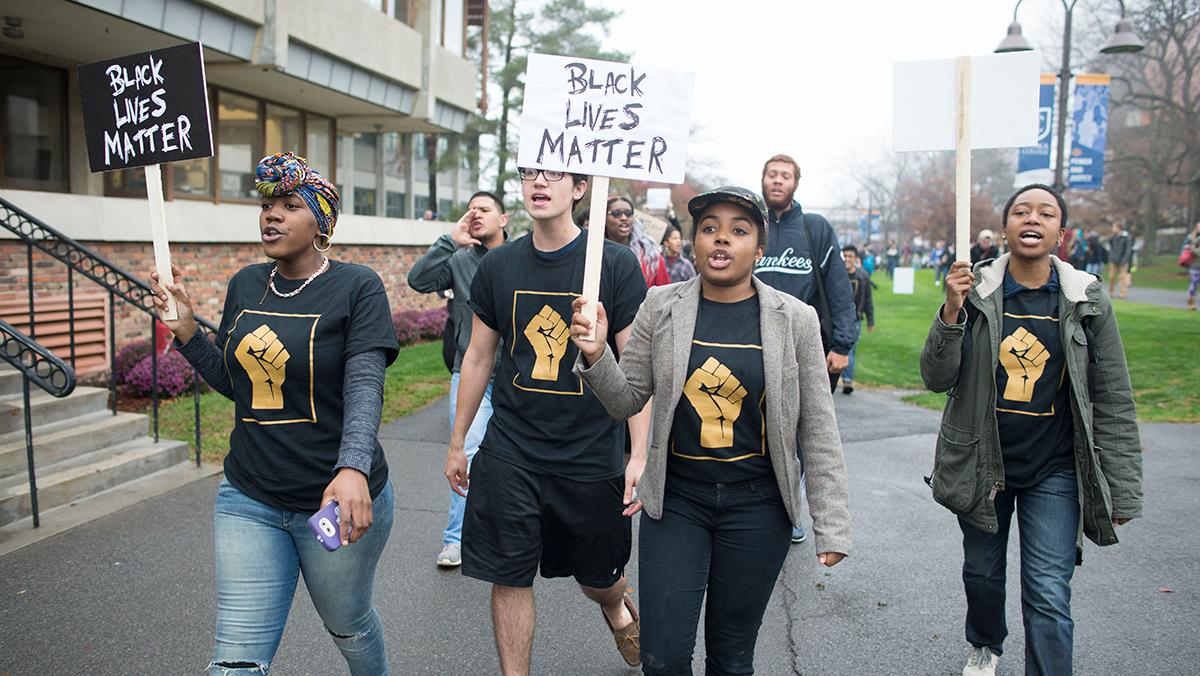 Fernando Ferraz/The Ithacan
Members of POC at IC hold a “Solidarity Walk Out” on Nov. 11, in which members of the group demanded the resignation of Tom Rochon.
By Cedrick-Michael Simmons
Published: October 5, 2016

On Jan. 14, 2016, Tom Rochon announced his decision to retire from his position as President in 2017. This decision followed his commentary in The Chronicle of Higher Education where he asserts “embattled leaders should be stepping up, not stepping down” in the wake of student activism “focused on inclusivity and bias.” This activism, he argues, is caused by shifting expectations from students to have a campus with “an absolute assurance that no student will be made uncomfortable by any expression related to his or her … identity.” While I agree with his decision to resign, as an alum who supported protests against racial inequality at Ithaca College, it is important for our community to deny the premise that student protests were caused by isolated incidents of bias and an unwillingness to engage in critical dialogue on campus.

When I joined IC in 2010, multiple individuals and organizations were already engaged in discussions about changing policies and practices of resource-allocation on campus. For example, as she reiterates in her commentary in 2015, Joyti and four other students shared a study about the negative experiences of ALANA students at IC that mirror a long list of studies from critical race and education scholars. The students presented these findings to the incoming first-year students in 2012 with the President and Board of Trustees in attendance. In the years following, critiques about diminishing resources for programs that provided social and financial support for ALANA students, the diminishing amount of staff and tenure-track faculty positions for experts on the relationship between covert racism and higher education and the unwillingness from the President and the Board of Trustees to respond to the negative experiences of an increasingly diverse campus community, heightened each year. Even though administrators were willing to absorb critiques and recommendations about addressing racial inequality on campus, the response was always the same: inaction.

As President of the Student Government Association (SGA), I spoke with multiple administrators about these consistent yet heightening critiques about inequality and inaction at Ithaca College. In response, I was told to simply “prove it” with “objective” data. The reality was that a campus climate survey was already administered in 2012 but a range of excuses emerged when I asked for the findings: the data “couldn’t be analyzed” by researchers on campus, the findings were “old” because a year had already passed, and that the president asks for “ongoing discussions about diversity” until the results were ready to be published. After a year of conducting workshops, dozens of meetings with students and faculty and organizing a town hall meeting with multiple administrators in attendance, I learned that the problem was that our leadership prioritized mascot surveys over addressing the findings that will simply be reiterated in the upcoming climate survey next year. Once again, the response was the same: inaction.

When over a thousand students, faculty and staff joined together to protest last year I was finally proud to be a member of the broader Ithaca College. These protests were caused by administrators and the Board of Trustees prioritizing revenue and reputation over people and their pain. These protests were caused by years of inaction and unequal working conditions, compensation and access to democratic governance that I witnessed many years prior. These protests were caused by the necessity to have leaders at Ithaca College that respond to the needs of the existing community rather than future donors and applicants in the year 2020. Finally, the protests reflected an empirical reality when examining how social change occurs: progress is caused by the voices of marginalized people and allies collectively demanding a shift in policies, practices and resources from our leaders.

If our new leaders fail to step up and prioritize the conditions of marginalized folk rather than wealthy donors and majority stakeholders, protests will inevitably arise simply because we all deserve to learn in equitable (and not just diverse or “inclusive”) campus conditions.