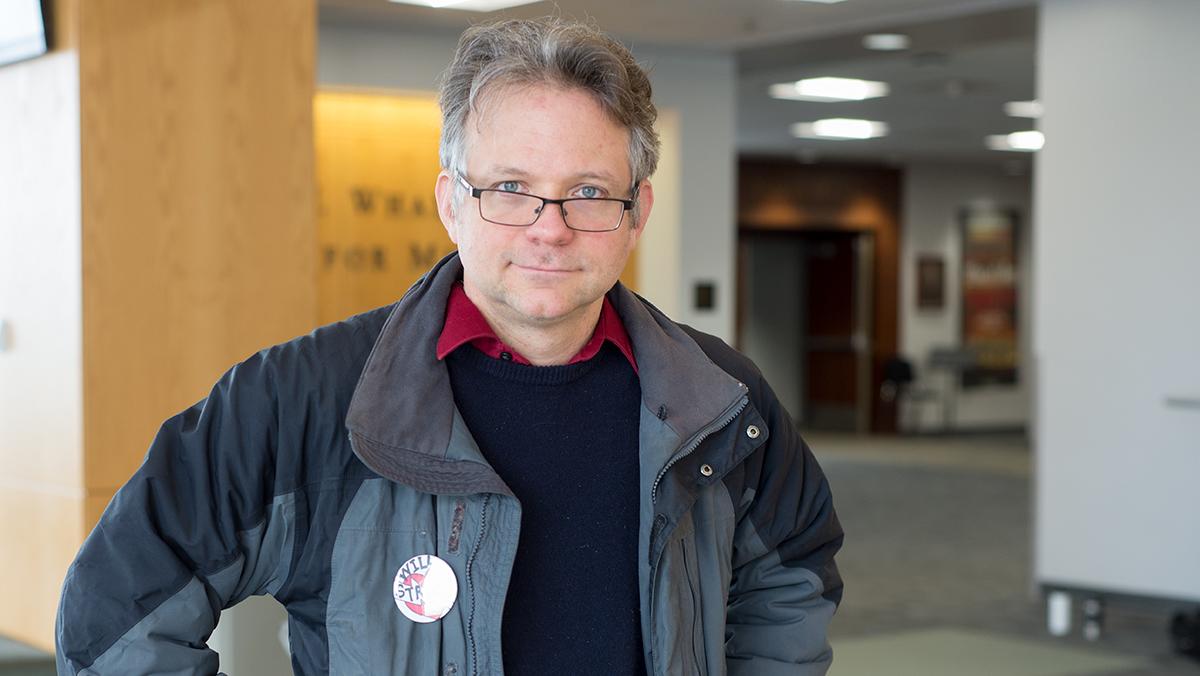 Fernando Ferraz/The Ithacan
Lecturer Tom Schneller is a member of the contingent faculty union and writes about the difficulties the union has had in negotiations with the Ithaca College Bargaining Committee.
By Tom Schneller
Published: March 22, 2017

As a student at IC, how do you feel about attending an institution that is built on a model of economic exploitation in which contingent faculty are used by the administration as cheap and disposable labor, to be hired and fired at will? An institution that refuses to invest in minimal job security and adequate pay for 41% of your professors – even though doing so would be easily achievable for the college, and would not require tuition to be raised?

If your answer to these questions is “not great,” you will understand why we decided to form a union to represent both part and full-time contingent faculty at IC. The two principal goals of the Contingent Faculty Union are simple and straightforward: 1) longer-term contracts for full-time contingent faculty and 2) pay parity for part-time faculty, which would amount to a mere 0.3% percent of the total budget.

Neither of these goals would represent a significant burden for Ithaca College. As we have argued repeatedly, teachers’ working conditions are students’ learning conditions, so achieving them would benefit not only contingent faculty at IC, but the campus community as a whole. When we began the negotiations process in October of 2015, we were hopeful that we could make our administration recognize that keeping 41% of their own professorate in a state of perpetual precarity is neither an ethical nor a sustainable way of preserving the college’s ostensible “commitment to excellence.”

We have since learned that attempting to convince the leadership of this college to do the right thing for contingent faculty is like trying to squeeze blood from a stone.

Throughout the negotiations process, we shared wrenching accounts of the condition in which many contingent professors at IC subsist – on Medicaid, on food stamps, unable to pay the rent, working as farm laborers to make ends meet, incapable of affording a mortgage to buy a house, too scared to start a family because they never know if they will be out of a job next year – only to be met by blank stares and a collective shrug on the part of the administration. Our salaries, we were tartly informed, correlate with “market rate” – which is admin speak for “shut up and go home because other institutions exploit their contingent faculty as well.” The existential struggle of their own faculty is a matter of complete indifference to our privileged six-figure administrators, whose flat horizons are ringed by the same ruinous neoliberal dogma that is currently destroying the American middle class.

Instead of seriously engaging with our proposals, our leadership has tried to clamp down on the prospect of progress at IC through intimidation. In what we think is not a coincidence, most of the full-time contingent members of our bargaining committee have been terminated, and will not be returning in the fall to teach at IC. Retaliating against employees for participating in union activity is illegal, so with the help of the Cornell Labor Law Clinic and SEIU, we filed an unfair labor practice charge against the college that is currently being investigated by the National Labor Relations Board (https://theithacan.org/news/unfair-labor-lawsuit-filed-against-ithaca-college/).

When we engaged in peaceful rallies in late February, the IC Chief of Police tried to bully us into silence by sending a stern threat that if we continued to protest on campus, we would face “a variety of actions up to and including legal proceedings.” (https://theithacan.org/news/public-safety-warns-unions-representatives-of-legal-action/) Needless to say, we will continue protesting on campus against the attempts of the administration to intimidate and harass contingent faculty members and allies who are legally organizing to improve working conditions on this campus.

What we have learned after 18 months of squeezing the stone is that in order to win a strong contract, we will have to take our struggle out of the airtight and windowless “bargain basement” of the Peggy Ryan Williams Center into the public space of Ithaca College. Having met with incomprehension and indifference from the administration, our union has decided to appeal directly to the IC community for support and solidarity – to our students and fellow professors, most of whom, unlike the leadership of IC, understand that a university cannot function well without a strong supportive framework for all faculty.

Any hope for improving conditions at this institution – for any constituency at IC – has to come through organized and collectively applied pressure from the IC community, not its leadership. It was through such grassroots action that POC at IC succeeded in their struggle to oust Tom Rochon and shine a spotlight on institutional racism at IC; it will be only through such organized action that contingent faculty at IC will win a fair contract that guarantees some degree of job security and pay parity for the most vulnerable segment of the professorate.

At the heart of change for the better at IC are you – our students. You have an enormous power over the administration, because you hold the purse strings, and thus, in effect, the keys to the college. Since the demonstration of student power in the fall of 2015, the administration has lived in terror that the campus community might coalesce again to press for real change at this institution. So far, they have gotten away with keeping down the contingent faculty, but if they realize that students, staff and professors are uniting in solidarity to shut down this campus on March 28 and 29, they will have no choice but to do the right thing.

So for a real education, walk out of your classes and come join us on the picket line on March 28 and 29! There’ll be music and speeches, songs and poems, signs and banners – and best, of all, the thrilling knowledge that if we unite and push back together against fear, cynicism, and the stranglehold of entrenched hierarchical structures, we have the power and freedom to change Ithaca College for the better.

It’s a good practice run for what is going to have to happen on a massive scale if we ever want to get democracy back in this country.