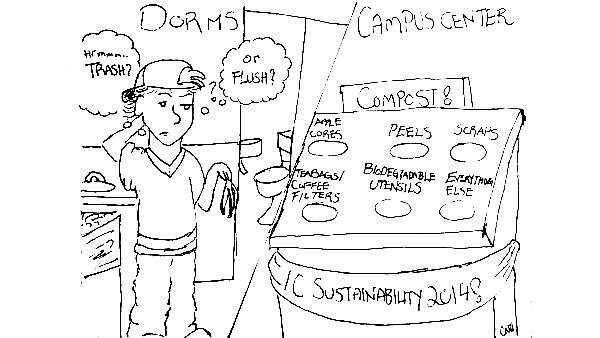 Tompkins County will begin a curbside compost collection pilot program for 400 of its West Hill residents on Nov. 15. The selected households will be able to place food scraps in bins at the curb for pickup by Cayuga Compost, which will process the waste.

If this pilot program is successful, residents will no longer have to worry about composting food in their yards. Personal compost bins often inconveniently attract animals as well as create unwanted odors, but a collection service will be convenient for those participating. The county’s idea could also be beneficial for Ithaca College students residing on campus.

The college initiated its composting program in 1993 for college students and on-campus residents. Dining hall foods are composted, and there are compost bins available in food areas, such as IC Square, for students to use. Not only this, but the Student Government Association just passed a bill requesting compost bins for residents in the Circle Apartments.

However, there is a downside. Though students on campus are able to compost their food when they eat in the dining halls or IC Square, there are no compost bins for the Terraces, the Quads or the Towers. The college could remedy this situation by adding compost bins to the dumpster areas where students take their room trash. Though the college may be concerned about the compost bins attracting animals and creating bad odors on campus, it could avoid this problem by having paid staff collect the compost bins outside as often as those at campus dining locations.

Either way, Tompkins County is taking a step in the right direction by piloting a compost program. The college has already done impressive work with composting initiatives on campus, but there is always room for improvement.