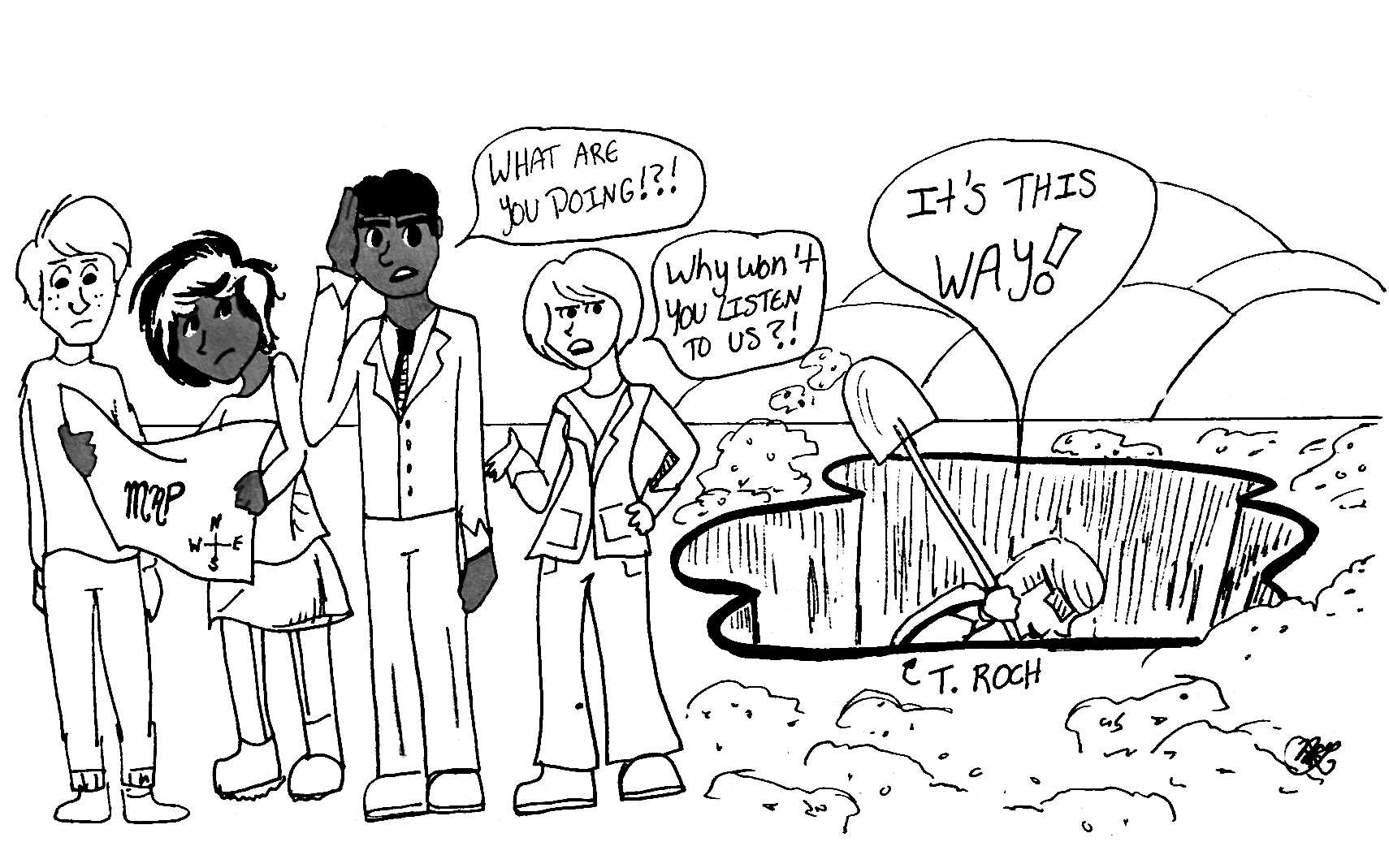 With the chant “Tom Rochon: No confidence” ringing through the air at Ithaca College, as well as a number of documents detailing grievances against him being released by faculty and students alike, President Rochon has been forced to defend himself with a strategic public relations campaign. In just the last couple of weeks, Rochon has been featured in interviews with The Ithacan, the Ithaca Journal and the Ithaca Voice and has even published an op-ed in The Chronicle of Higher Education. Yet, despite all of these opportunities, Rochon seems to be digging himself deeper into a hole of contradictions and continues to avoid the very issues that put him on the defensive in the first place.

It is not an unprecedented practice for Rochon to shift accountability onto another person or group in times of distress, as was made evident by the sudden creation of a chief diversity officer position to front for the administration on race issues in the midst of high-profile protests. This same act of putting responsibility onto someone else appeared again in Rochon’s interview with the Ithaca Journal, in which he blamed other constituencies, particularly faculty, for the reinforcement and perpetuation of the inequitable campus climate, stating how there are “instances of faculty either making insensitive comments or kind of standing by not seeming to intervene effectively in the classroom when students make comments to other students.” He goes on to assert the same complicity among students and staff as well, instead of addressing his role in creating this climate of insensitivity.

But if Rochon does hold faculty behavior responsible for some aspects of the campus’ negative racial climate, his newly developed administrative action plan fails to adequately address the need for faculty and classroom education as a necessary avenue for improvement, only including a provision of optional diversity training for faculty members, which is hardly enough.

In terms of public relations, it serves Rochon well to shift reasonable blame onto faculty and other constituencies for the current racial climate. But his contradictory recognition of this fault while refusing to address it with real determination seriously undermines his credibility as an able leader and problem-solver.

His public avoidance of the doubts surrounding his credibility as an able leader, though faculty have made it clear they are dissatisfied with his entire top-down administrative methods, gives rise to even more concerns. Rochon chooses to focus on the issue of race, as he does in his op-ed in The Chronicle of Higher Education, titled “Why Embattled Leaders Should Be Stepping Up, Not Stepping Down.” In “stepping up,” Rochon is referring to how administrators like himself should be stepping up to the “opportunity to bring a commitment to inclusion into fuller alignment with a longstanding commitment to diversity.”

Rochon likely attaches his public relations campaign almost exclusively to the race issues on campus because this is what stemmed student dissatisfaction with his presidency, and the reality is he probably feels much less threatened by students than he does other constituencies dissenting against him, such as the faculty, who in their classes and in a series of letters published by The Ithacan, have detailed each and every grievance they have against Rochon’s top-down approach to leading the college.

And now, even students and alumni have joined in on making others aware of these grievances. Dominick Recckio, current student body president, along with the student body presidents of the last nine years and one student trustee, explained these grievances in an open letter published in this week’s issue of The Ithacan. There is no shortage of posts on social media from other students that bring up these issues as well.

Rochon should not be ignoring these concerns, and instead should be seeking out ways to collaborate with the faculty and students protesting his presidency. His avoidance of their grievances only furthers the disconnect, when the administration should be structuring avenues for conversation and sharing of power in decision-making, to alleviate the top-bottom approach to leadership that has been plaguing this campus.

However, Rochon continues to distance himself from these criticisms and focus on issues regarding the racial climate because within these problems, he sees an opportunity to help himself. He can take the campus protests against the racial tensions at the college and spin them to demonstrate the college’s encouragement of activism and freedom of speech, as he did quite explicitly at the Open House event.

But he cannot avoid being accountable for the way in which he leads this college and makes administrative decisions any longer. He cannot dismiss his responsibility in creating a culture of fear at the college through his top-down, deeply hierarchical and problematic leadership tactics, which continue to be present in his public relations strategies as he disregards faculty and student voices.


If Rochon has any chance of winning the respect and approval of the campus community members currently dissenting against him, he must stop ignoring the comprehensive list of grievances faculty, students and alumni have issued against him. He must recognize, both personally and publicly, that the current campus racial climate is not the only issue he needs to address and begin to address the roots of this issue, an important one of which is his leadership.

The editorial published in the Nov. 12 issue of The Ithacan analyzed how different constituencies were beginning to take power for themselves through protests and no confidence votes. At this time, this redistribution of power is critical as it gives us the first glimpse of what shared governance might look like on this campus.

Rochon needs to acknowledge this redistribution. He needs to listen to it. He needs to listen to what his constituents are saying about him, and he needs to make the change this burgeoning form of shared governance is speaking to and make it publicly clear how he is making that change. Only then will his public relations campaign, and his leadership, be effective.