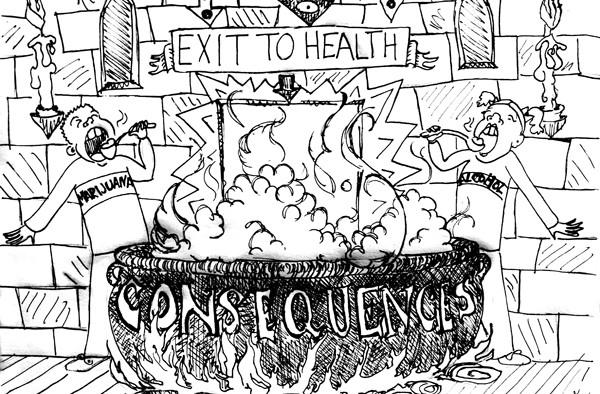 Picking the lesser of two evils is no longer necessary, thanks to college’s decision to equalize the consequences for marijuana possession and underage drinking.

Because of the efforts of Students for Sensible Drug Policy and Student Government Association, the illegal substances are placed on even ground. The policy should not be seen as a free pass to smoke or drink, but instead as a way to encourage students to make decisions based on health, rather than worrying about the severity of the punishment.

Granted, lowering the sanctions for marijuana possession meant raising the penalties for a first-time alcohol offense in order to treat both equally. However, alcohol is often regarded as just as dangerous, if not more so, for a developing brain than marijuana. By adding an education component for both offenses, the college is prioritizing students’ well-being.

The change raises the issue of what resident assistants, who typically write warnings and dispose of alcohol, are supposed to do in cases where Public Safety would normally be needed. Because the substances are now equated, those who are comfortable disposing of either one should be able to do so. The college should trust resident assistants to dispose of drug paraphernalia, with additional training.  Police support should also still be available for any situation if needed.

College is a time of independence and practical decision-making. Under this new policy, students are afforded the opportunity to assert that independence while knowing the consequences for their actions are the same.

By educating students on the dangers of marijuana and alcohol, the college has done a service to the campus by opening the door to healthier choices.