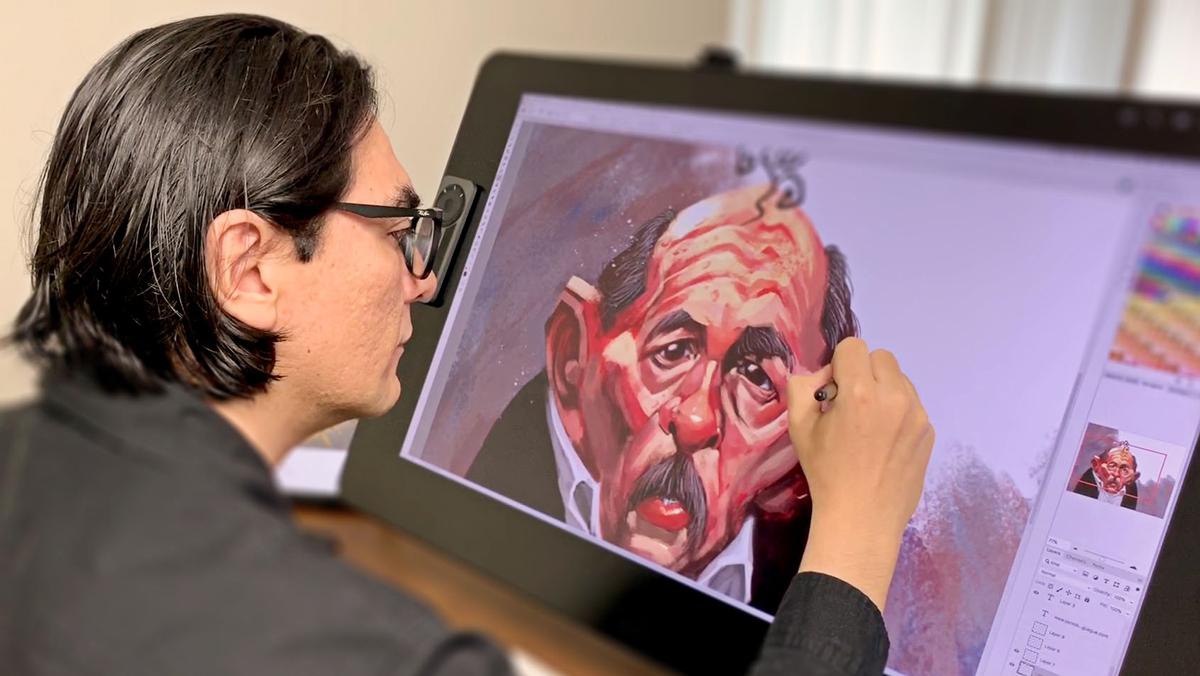 Pedro Molina is an international scholar and internationally acclaimed cartoonist, illustrator and journalist from Nicaragua. Molina won second place in the “gag” category for his cartoon on populism called “Populismo” at the World Press Cartoon ceremony in September.

Molina is currently a visiting international scholar in the Ithaca College Honors Program for the next two years through the college’s collaboration with Ithaca City of Asylum. Molina’s cartoons have been published in major publications like Politico, Cartoon Movement, Los Angeles Times, Chicago Tribune, The Dallas Morning News and Courrier International.

Opinion Editor John Turner spoke with Molina about his journey as a cartoonist and the challenges he has faced doing what he loves.

John Turner: What was the cartoon that you won second place for about?

Pedro Molina: I did that cartoon about populism. The cartoon speaks not only about the situation in Nicaragua, but, sadly, a problem that is very common in the whole Latin America area. I will say that even here in the United States right now, there is the problem of populism. We have these populist leaders that are paid by the people, and then they steal from those people. They give just a little bit of that money back to the people. For example, in Nicaragua, they will say, ‘OK, I built this school for you with the money you gave to me,’ and they do things that are not equivalent to the money they get from people.

JT: How did you end up in Ithaca?

PM: It is a long story. So I was 17 when I started publishing stuff. The problem is that Nicaragua right now is under a dictatorship. So because of that, the situation is not very good for independent journalism or people in general, so, back in 2018, there was a series of protests, and the environment got very dangerous. A lot of people were killed, and among them were journalists. They went after independent media. Officials went to the newsroom, to the building where I worked, and they took possession of the building. They took everything, all the equipment and everything. Some journalists were put in jail and accused of promoting terrorism and a lot of other crazy stuff. So many of us, in order to keep doing what we were doing, we had to go into exile. Once I left Nicaragua, I made my way to Ithaca.

JT: What are some of the challenges you face as a cartoonist?

PM: One of the problems is censorship from governments, like in Nicaragua, for example, by the way I still draw cartoons for Nicaraguan people. I keep probing daily about the situation that they’re in right now where the government is trying to implement a new law in which they want to criminalize the use of social media. They want to control which people have access to social media. So that’s one of the dangers of being a cartoonist, authoritarian regimes, crazy leaders, populism, dictators. Another challenge is political correctness. I will say that political correctness is not always a bad thing. There are some things that you have to change over the course of the years on the way that you understand some things and how you present them. … But the bad thing with political correctness is that it can be used by some power groups as a shield to avoid criticism, and every time you do a cartoon about any particular group that they feel paints them in a bad light, they have an issue with it.

JT: What makes a good cartoonist?

PM: I do agree with most of my colleagues that the most important part of cartooning is the idea. If you are clear about what you want to say and just say it in a clever way and it can be understood without anyone misinterpreting it, that makes a good cartoonist. It doesn’t matter if it’s well drawn or not. If it’s well drawn, that’s a plus, but it doesn’t have to be like that. There are a lot of people who are very big cartoonists who don’t draw very well. That’s the thing — it doesn’t matter that they are not masters of their craft because they know how to take an idea and put it into something visual.

JT: What advice would you give to someone who wants to be a cartoonist?

PM: Right now, it’s very hard right to start as a cartoonist because of everything going on. But you also have access to a lot of stuff to educate yourself in this form of communication. You have the internet. You have social media where you can share your cartoons and get feedback but also get a lot of hate and trolling. So you kind of have to learn how to deal with this particular scenario. But if you like to do it, then go ahead and do it. Educate yourself about this form of communication and try to challenge yourself every day to improve on your ideas. A good cartoonist is always looking around and trying to use what they are experiencing into their work in some way or another.

JT: If your younger self could see you now, what do you think he would say?

PM: I think he will be proud of me because I have managed, even with everything I’ve gone through, with the exiling and the threats and the fear, to overcome it all. I will say that he would be happy to see that I keep drawing and that I keep learning and I keep trying to do my best every day.