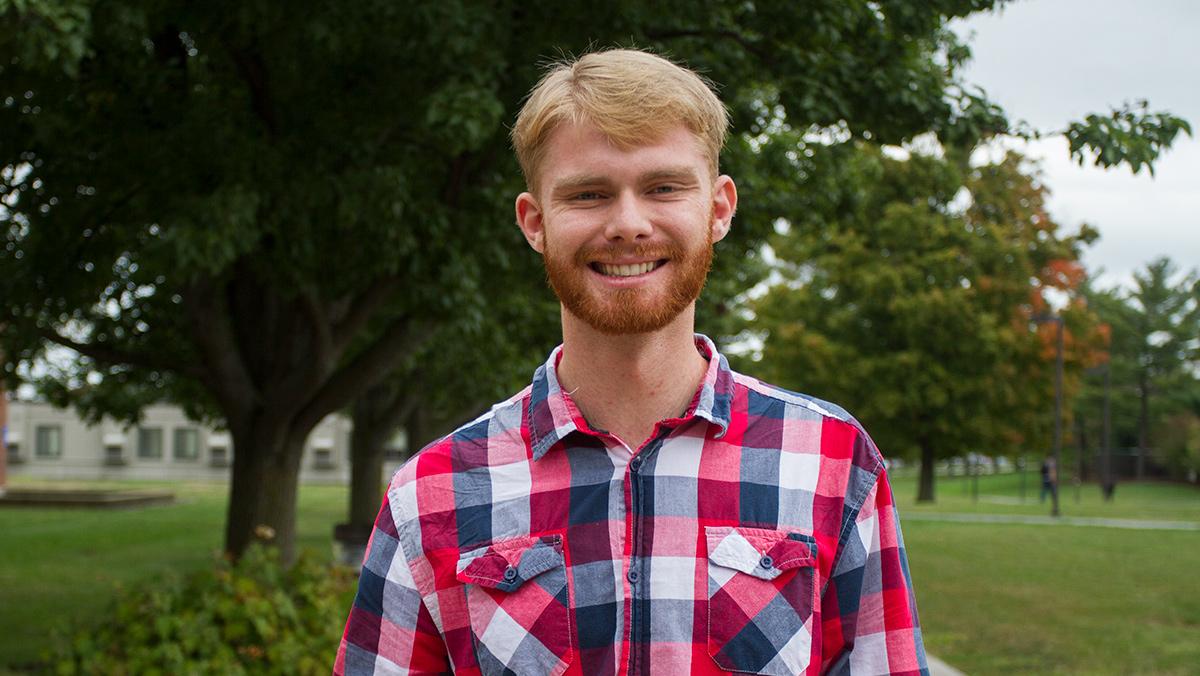 During national Mental Illness Awareness Week from Oct. 2 to Oct. 8, junior Christopher Biehn is hoping to spread awareness about mental illness through a photo challenge.

The photo challenge will be sponsored by the student-run campaign called “Listen. Learn. Accept.” that Biehn founded. Participants will contribute a black-and-white photo with the caption, “Depression makes the world change from color to black and white. #LLA.” This is the second year Biehn will be using this photo campaign to raise awareness about mental health.

Opinion Editor Celisa Calacal spoke to Biehn about his personal experience with mental illness, the stigmas surrounding mental health and his hopes for this upcoming campaign.

Celisa Calacal: What motivated you to start this mental health–awareness campaign?

Christopher Biehn: I’ve had a lot of mental–health challenges — I’m diagnosed with bipolar disorder. I’ve always felt the need to do advocacy for mental health because it has such a personal connection to me, and I really do believe that the purpose of my pain is to help others who suffer in similar ways. I’ve always been interested in mental health, and I think this could be a really cool opportunity to spread awareness and have a really positive conversation about the effects of depression during this time.

CC: Do you think the conversation about mental health has gotten better?

CB: I think it’s slowly improving, but I think there’s still a lot of room to go. I’m part of a group on campus called Active Minds. Active Minds does a phenomenal job to fight the stigma that surrounds mental illness and mental health. And yeah I’d say that in Ithaca, a lot of the professors are very understanding. And I think that for the most part … there’s less stigma at Ithaca, but I do think there’s still very prevalent stigma in society.

CC: What do you think some of those prevalent stigmas are?

CB: I think a lot of people will just use the wrong terminology. So they’ll say, “I’m depressed” if they’re having a bad day. Or they’ll say, “Oh, the weather’s depressing,” or, “I’m depressed because I got a bad grade on my exam,” or “I’m depressed” for a wide variety of reasons. And that’s really not the right terminology because in most cases, those people are just sad, and clinical depression is a very different beast. So I think that really is important to note the difference. And also, I think that people — they’ll just say things like, “Yeah, I’ve had a rough day. I’m going to kill myself,” as a joke or just a figure of speech, and I feel like oftentimes that can be offensive to people who have experienced suicidal thoughts or people experiencing challenges in mental health. So that’s just one example. There are many examples that stigma is still very prevalent in society.

CC: What do you hope to accomplish with this awareness campaign?

CB: I’m really hoping that people be engaged and that it will be a positive conversation regarding depression, and I’m hoping that by seeing other people post black-and-white photos, that this is an opportunity to stand in solidarity with those who battle depression. I’m hoping that it spreads. I would love for this to go viral. That’s very ambitious, and I don’t expect it to this year, but I think this is going to be something I will continue to do for Mental Illness Awareness Week. And I look at something like the ALS Ice Bucket Challenge, how successful that was, and I think that by posting a black-and-white photo, that’s very simple, and it’s very representative, because although this analogy pales in comparison to what depression is actually like, it is interesting to note that if you’re seeing the world in color, then all of a sudden, black-and-white, how drastically different that is.

CC: Can you explain a little more how your personal experiences with depression inspired you to start this campaign and educate people more about mental health?

CB: When I was in high school, at the end of eighth grade, I experienced a serious head injury, which my doctors said triggered … bipolar disorder. In high school, I was diagnosed with bipolar disorder, and, especially my senior year, I had a lot of difficult challenges with depression. And I actually came out with a video kind of explaining my story, and I think that by sharing your story — there’s a couple things that happen by sharing your story. I think people feel they’re not alone if they experienced similar challenges or setbacks. People will realize it’s OK to be vulnerable. I think it is an important conversation starter. And I think some people will think that, you know, by being open or transparent, it’s like a cry for attention, and I don’t think so at all. … Someone who wants to be a mental–health advocate and considers myself a mental–health advocate, I think it’s very important to be transparent because then people can understand what the process is like.

CC: What are some things you want people to understand about mental health?

CB: I want people to understand that if you suffer from depression or have a diagnosable mental illness, that you can’t always suck it up or try to snap out of it. And it’s not something where you have full control. And specifically for depression, I want people to see mental illness as legitimate brain disorders that impact your life. Sometimes, with my experience with mental illness, I kind of consider it my brain’s chemical warfare. And there’s elements that are so beyond my control, like even recently, I have done everything in my control to get out of my depressive episode. And I have exercised, and I have reached out to my chaplain, gone to counseling, and I’ve taken my medication. I’ve gotten good sleep. But the biggest thing is out of my control because everything I’m doing is trying to manage the symptoms, but at the same time, there’s an element that is out of my hands. So I really want people to realize that these are very important. If you break your arm, everyone runs over to sign your cast. If you have cancer, people realize that’s a very serious diagnosis. And I want people to realize that with mental illness, you can’t always see that a person is battling mental illness or having mental–health challenges, but it’s also very serious, and it’s important to realize that these are health concerns that need to be addressed. …  If you’re suffering from mental illness, or if you feel like you might have some symptoms … help is a very important aspect, and it’s very necessary to see a therapist sometimes. It’s important to be medicated if a psychiatrist thinks that’s the best thing. So yeah, it’s OK to get help, and there should be nothing shameful at all about seeking out resources to get better.

Commentary: CAPS is still not ‘ready’

CAPS is in need of widespread, public promotion of its less publicized services.