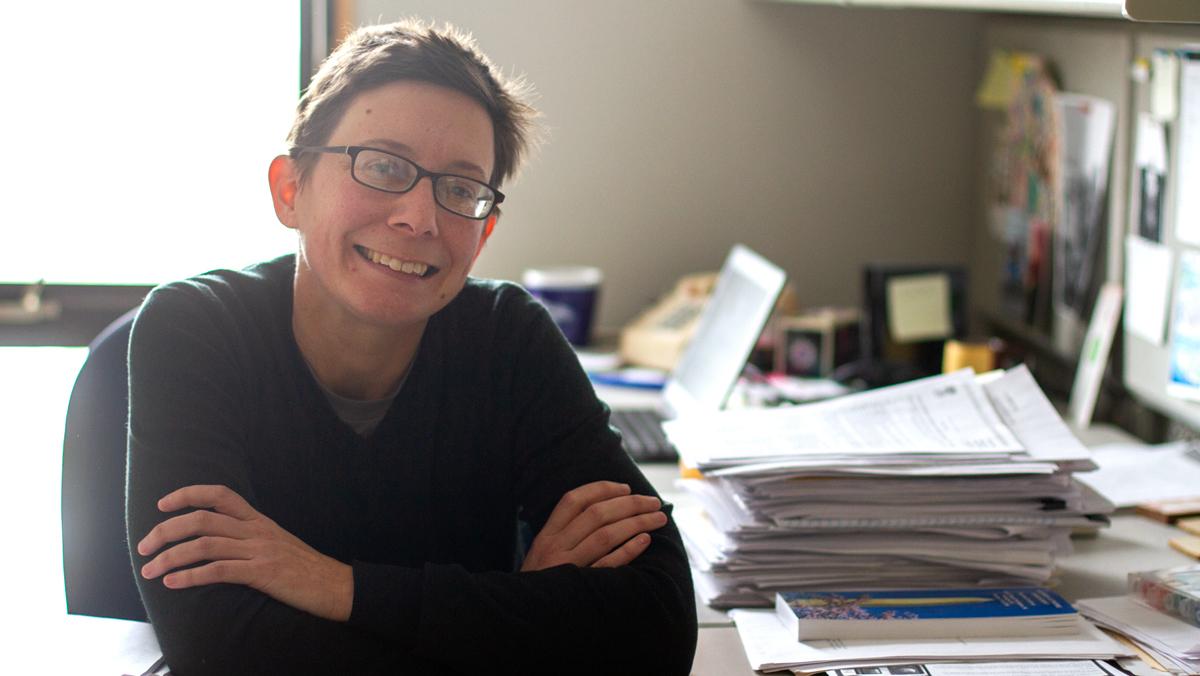 Written in the 1990s, Tony Kushner’s two-part play, “Angels in America: A Gay Fantasia on National Themes,” portrays the HIV/AIDS crisis as it was during its time period: deadly. And although the disease can be more easily managed today due to modern medicine and health care, recent policy changes regarding health care have made obtaining medication more difficult.

Jennifer Tennant, associate professor in the Department of Economics, recently wrote an article that addresses the historical context of the play. “The Great Work Begins Again: Angels in America in the Age of Trump,” draws parallels between what the HIV/AIDS crisis meant to people during the 1980s and 1990s and what the disease does and will mean to people today under President Donald Trump’s administration.

Opinion Editor Meredith Burke spoke with Tennant about her decision to write the article, the Trump administration’s current effects on HIV/AIDS and American health care as a whole, and what it could mean for the future.

Meredith Burke: For our readers, could you give an overview of what your essay is about?

Jennifer Tennant: The essay’s called “The Great Work Begins Again: Angels in America in the Age of Trump,” and it basically talks about how historical context impacts how we understand or think about a play. … When the plays were written and the time they took place, HIV/AIDS was basically a death sentence. But because of a lot of medical advances for people with access to health care, now, for the most part, it is a chronic illness. But with Trump — his own personal views, but more importantly, what his administration is doing — with these LGBTQ rights rollbacks and with attempts to weaken or repeal the Affordable Care Act … we might see a time where progress against the disease goes backward and where the play is going to be particularly relevant again. “The great work begins” — that is the thing the angel we meet at the end of the first play, “Millennium Approaches,” says, and that’s why it’s called “The Great Work Begins Again.”

MB: What brought on your decision to write the article?

JT: I am a health economist, and that’s what I teach here at Ithaca College, … but I am also a writer, and for a very long time I’ve just loved reading and plays. … I’ve always loved “Angels in America” since the nineties, and I was just thinking about the main theme of the essay — how does historical context affect how we experience a play? — while I was watching IC’s production of the play in 2017. I thought, “oh, there’s an essay there,” and that’s why I started the essay.

MB: Do you think the Trump administration is going to reverse the medical advances regarding HIV/AIDS?

JT: I think it definitely has the possibility. Any time that he or his administration tries to weaken the Affordable Care Act, that will have the possibility to erode progress against the disease because fewer people will have access to health care. … And with the December 2017 tax bill, which actually this year we are just going to start feeling the effects in taxes, … one of the other effects is that it very quietly took away the penalty for the individual mandate. The individual mandate means everyone has to have health insurance or be subject to some sort of penalty. In the December 2017 bill, they made that penalty zero, which was a way to kind of sneakily take the teeth out of the individual mandate. … Then the other stuff [the Trump administration] has been doing is that there’s been a lot of backslide on LGBTQ rights, and that just increases stigma, and that will also erode progress against the disease.

MB: How has the Trump administration been increasing stigma against the LGBTQ community?

JT: For two years in a row, he or whoever was speaking — [Vice President Mike] Pence, this year — on World AIDS Day intentionally didn’t talk about the LGBTQ community, and that’s erasing. The fact that “transgender” was kind of one of the forbidden words in the 2018 budget documents, that is something that is very harmful. The fact that [Trump] just, all of a sudden, basically got rid of everybody on the task force for HIV/AIDS. … There are a lot of people who look to these people as leaders, and they see that it’s fine to treat people that way.

JT: I think one of the great things about Ithaca College is that there’s so much stuff going on. … There’s just so much connection in all of these disciplines, and that’s one of the reasons I wanted to write [the article], because it connects a lot of my interests.

“Angels in America,” the Tony Award-winning play, has been a focus of Claire Gleitman’s study since the show first appeared in 1991. Now the professor and chair of the English department at Ithaca College will get the chance to meet and talk with the author of the work that has been a large part of…