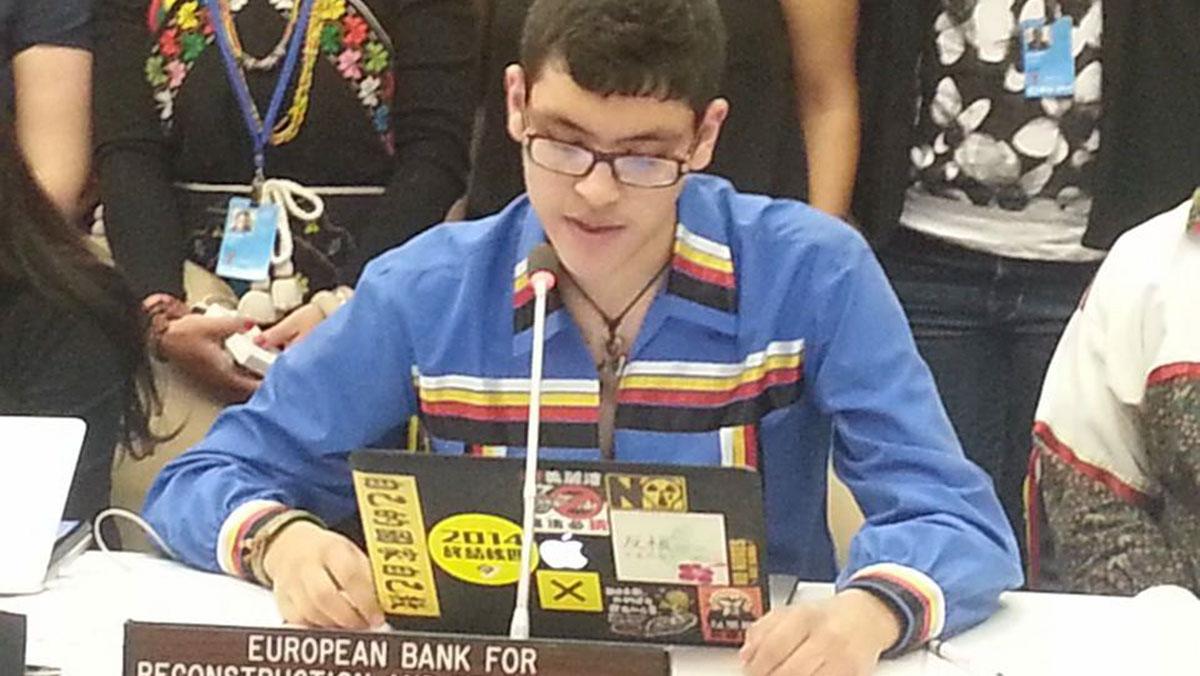 Within one week, junior Victor Lopez-Carmen was selected to receive two prestigious scholarships, neither of which has been awarded to an Ithaca College student before.

The Morris K. Udall Scholarship is awarded to 60 students out of more than 500 applicants who demonstrate leadership, service and an interest in the environment and American Indian nations. Through the Boren Scholarship, which the National Security Education Program awards to 100 students out of 800 applicants who wish to work in federal national security, Lopez-Carmen will be studying Arabic full-time in Amman, Jordan, this summer. Currently, he serves as a commissioner on the Tompkins County Human Rights Commission, which advises the legislature on human rights issues in the county.

Opinion Editor Kayla Dwyer spoke with Lopez-Carmen about the scholarships, his interest in the fields of policy and Arabic studies, and his lifelong tradition of activism for Native American rights.

Kayla Dwyer: Why did you apply for these scholarships?

Victor Lopez-Carmen: For the Udall scholarship, I had a friend who had it last year from a different school, and she said I should apply. I’m also from a tribe, and the scholarship is mainly for environmental students, but there’s a section of it for Native American students who are interested in policy and health as well. I thought I’d be perfect for that because that’s exactly what I’m interested in. I also have a long history with Udall — Udall was a congressman in Arizona, and he had a long history with helping Native American tribes, with the environment, and he actually helped my tribe a lot. He’s the one who actually passed legislation that allowed my tribe to become federally recognized and gave us land to live on in Arizona, like our own reservation. … It was pretty much meant to be.

KD: And the Boren scholarship?

VLC: For such a long time, I wanted to learn about the cultures of people who speak Arabic. I grew up next to a refugee zone, where they’d house a lot of individuals and families from mainly Arabic-speaking countries: Iraq, Iran, Pakistan, Morocco, Egypt. A lot of those individuals went to my high school, and I became friends with a lot of them. … I just really loved the culture, so then I wanted to find a way where I could learn the language. Also, I want to be a doctor, so I just want to be able to, at some point in my life, live in western Asia in an Arabic-speaking country and practice medicine over there in some way.

KD: What kinds of things are you involved in right now that put you on the radar for the Udall scholarship?

VLC: I was raised by Native American activists. My whole life, I’ve been going to protests for different causes in Native American rights. My dad was involved in the American Indian Movement, my aunt is the executive director of the largest indigenous NGO in the world. So I’ve just been surrounded by people who have been able to instill those values within me — fighting for Native American health in all aspects of life: culture, the land, pretty much everything. … Freshman year, I had the opportunity to attend the United Nations. It’s this program called Project Access, and they invite 15 to 20 indigenous leaders from around the world. They usually invite about one to two youth indigenous leaders from around the world, and we get to … present different health issues, issues with culture, with land, with our governments that reside in our lands, issues affecting our lives in every way. … I went there my sophomore year as well. … You remember the protests last year — we wanted a working Native American Studies minor. … After those protests, we had a lot of meetings with Rochon and the administration. We wanted them to hire a faculty member to teach in the Center — we wanted a Native American faculty member as well. They hired Dr. Michael Taylor after that, so we were able to get that into motion. He tells me his classes are full, so it was really successful. It really did work out. Fighting for Native American rights — for me, I do it intentionally, but it’s something I grew up with, so it’s definitely a part of me, very ingrained in my culture.

KD: The Boren Scholarship is geared toward students interested in working in federal national security. Why are you interested in this area?

VLC: I’d definitely be interested in maintaining my relationship with the United Nations. They have a special representative for indigenous people in the Americas, in the United States, that work with the U.N. to keep the U.N. updated and in the know of what indigenous people are going through in the United States and the Americas, keeping them on track when they’re making decisions that might affect our livelihoods. One other thing I wrote on my application is that I wanted to participate on the DART team, Disaster Assistance Response Team, that is an extension of the U.S. military where they employ a team of doctors to respond to disasters anywhere in western Asia, Arabic–speaking countries, places in Africa, too. They really need people who are able to understand the Arabic language. … My other option is working in the Indian Health Service. The government has set aside funds to set up clinics in Native American communities, and they always need more doctors — especially Native American doctors who can relate to the patients on a cultural level.

KD: How are you feeling about all of these goals?

VLC: I feel so grateful to God because He’s put a vision in me to do things, and it’s coming together, it feels like. To be able to have the resources to do what I want to do is amazing. I come from a background where I wouldn’t otherwise have the resources to travel or to do these things, and God had made a way. I’m just feeling very grateful and excited, and I’m just going to continue listening.