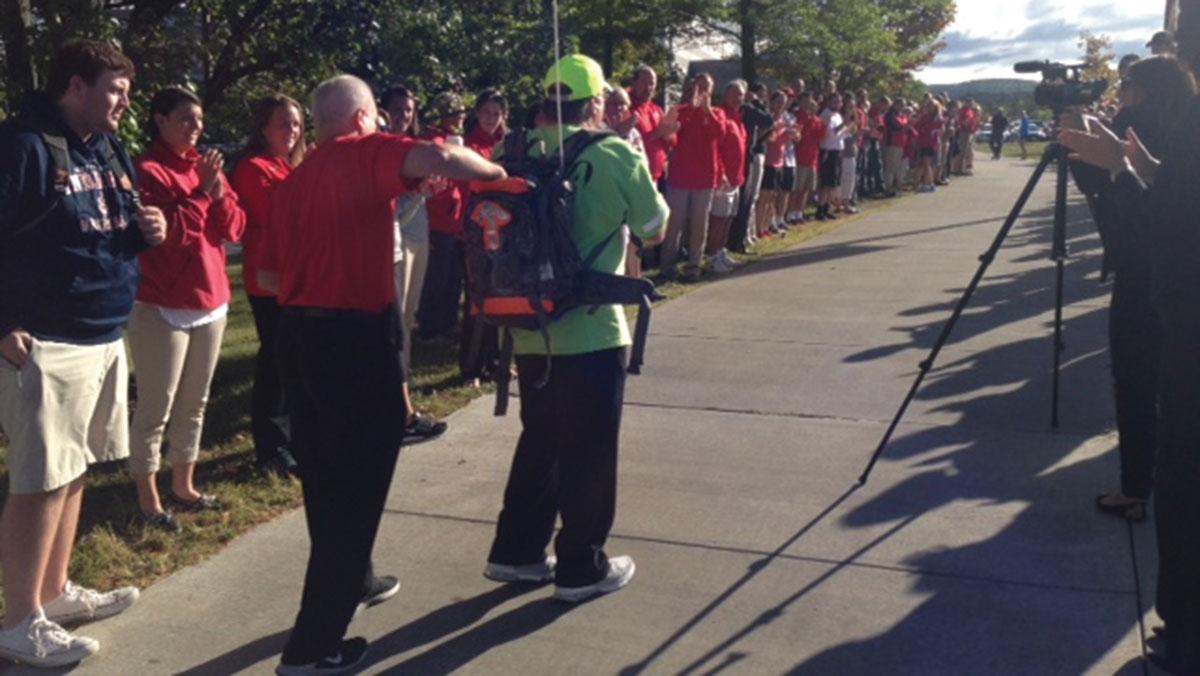 Children who rely on school for food often go hungry on weekends or holidays when school is not in session, according to the BackPack Program website. The BackPack Program attempts to alleviate the food gap by filling children’s backpacks discreetly on a Friday so they can go home with something to eat, serving over 40 school districts in Broome, Chemung, Schuyler, Steuben, Tioga and Tompkins counties during the 2014–15 school year. Almost 3,000 children received packs each week with a total of 85,056 packs filled, according to the website.

Allinger’s circumnavigation of the county began at the Friedman Wrestling Center on the Cornell University campus, where he was given a check for more than $6,000 from Cornell Athletics and Physical Education staff. His second-to-last stop was Ithaca College, and his final stop was Wegmans in downtown Ithaca where they filled a bus with food for charity.

The fundraiser is in accordance with Hunger Action Month. During this month, Feeding America and food banks across the county ask people to make an effort to end hunger in their communities.

Staff Writer Kyle Arnold spoke to Allinger about his walk, cause and mission.

Kyle Arnold: How did you start walking for charity?

Chris Allinger: Four years ago I was trying to get healthy, and my wife and I sat down and we were talking about the walking that I was doing, and she told me about the BackPack Program, and we kind of put it together. Putting a backpack on my back and walking all around to try to collect money made an awful lot of sense. If we filled my backpack, we could fill the kids’.

KA: How much money did you raise this year in total?

CA: We finished out totals last week at about $34,750, something like that. It’s up over last year, another thousand over last year. Each year it’s increased a little bit. We did a kind of a rough total over the four years and we’re at $118,000 raised.

KA: Why is Ithaca College an important stop?

CA: It’s a great stop. We start and really end with the universities. We start the walk at Cornell and coming down the hill after walking all through the county and getting to Ithaca College is just a great way to bookend. They’ve been so incredibly supportive for the past few years of the walk, so it’s just the last big boost for the final mile walk to the end, and the best part is they have students walk with me. It kind of ties universities and town relationships together — it works really well.

KA: How has your walking directly affected the food bank’s activities?

CA: Well it certainly has affected their ability to serve the schools they’ve expanded. When we started four years ago, they weren’t in all the schools in Tompkins County, and they are still expanding out into all the schools with the BackPack Program. They hadn’t gotten to every one of the schools, so this walk has been able to contribute to their expansion to the schools here and [was] much needed. A lot of people don’t think that Tompkins County has hunger problems because we’re so well off with the colleges and whatnot, but there is a great deal.

KA: How many miles did you walk in total?

CA: I didn’t really check. It was around a hundred, I know that. I just took it day by day.

KA: How old are you, Chris?