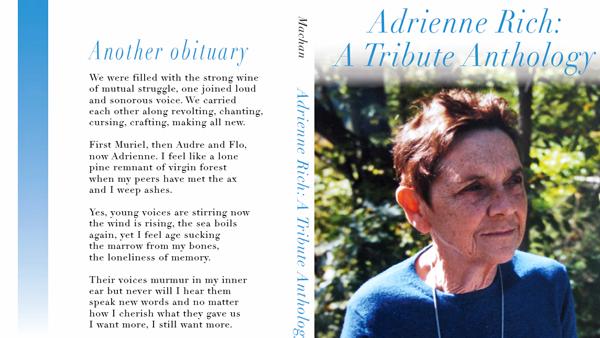 Courtesy of Spilt Oak Press
The cover of Adrienne Rich's tribute anthology.
By Jillian Kaplan — Staff Writer
Published: September 4, 2012
Adrienne Rich was a poet with a mission: be loud, get political and bring feminist and lesbian issues to the forefront. Despite her passing March 27, the writer and activist’s work lives on.
To honor Rich’s life and spread the echoes of her legacy, Ithaca-based publishing house Split Oak Press is releasing “Adrienne Rich: A Tribute Anthology.”Katharyn Howd Machan, professor of writing at Ithaca College, said Rich was able to bridge politics and poetry in a way few poets in America have. She said it’s Rich’s directness in speaking about politics that works with the depth poetry has.

“She was the darling of the white male establishment and just rocked it when she came out as a lesbian after being married and giving birth to sons,” Machan said. “Not only a lesbian, but a radical feminist lesbian, close to separatist.”

Machan said Rich talked directly about sexual and national politics, and stuck by her convictions. Rich refused to accept the congressional medal of honor during the Bill Clinton administration because she didn’t agree with Clinton’s stance on the military.

To celebrate the publication of the anthology, a launch party will take place at 6 p.m. Saturday at the Community School of Music and Arts.

Regina Carpenter, a lecturer in communication studies at the college, will kick off the event with the performance of her “Kate Crackernuts.” There will be a reading of Rich’s famous poem “Diving into the Wreck,” and several contributors to the anthology will read their works about or inspired by Rich.

Machan wanted to create the anthology after hearing of Rich’s death. She approached Jim Stafford, founder of Split Oak Press and assistant professor of writing at the college, who agreed to take on the project right away.

Machan said the death wasn’t unexpected, as Rich had been 82 and ailed by rheumatoid arthritis for years. However, she said it’s strange knowing Rich won’t be writing anymore because Rich has been a huge influence in her life.

Machan said she saw Rich do a reading in the 1970s at Northwestern University and brought her to the college in 2001 as part of the Distinguished Visiting Writers Series. This was when Machan really got the opportunity to get to know Rich.

“Her intensity, her powerfully channeled anger — eloquent anger is a good phrase to use for much of Adrienne’s writing,” Machan said. “She just has a clarity in her work and a vision about how she believed the world should be different.”

Marge Piercy, an established poet, activist and a friend of Rich’s, will read at the launch party from her newest book, “The Hunger Moon, New and Selected Poems, 1980 – 2010,” along with some poems that were never published.

Though Piercy never worked directly with Rich, she said they both held left-leaning politics and were close friends. Piercy said her energy toward the feminist movement was sparked by general awareness and observing the condition of her mother’s life.

“My mother grew up in poverty in Pittsburgh and Philadelphia and finally Cleveland,” Piercy said. “She was an immensely curious woman with a great capacity for pleasure, but she had little of it.”

Aware of the power of her words, Piercy said poetry can help people feel a sense of community. She said her poems are used for memorials and in religious congregations in America and in England.

Stafford is also aware of poetry’s ability to influence people’s interactions. He said there is a diverse pool of contributors to the Rich anthology in both age and profession, and said he hopes the book will create a community among Adrienne Rich’s followers.

Machan received statements from contributors about why they wrote their poems, adding an extra layer to each poem’s intensity and purpose. She said she chose to include these statements in the published anthology after each poet’s biography.

“[Having the statement] is extremely powerful,” Machan said. “For the most part [the writers were] women who had never met her, but it was through her words on the page that they came to love her work, admire her so much, and understand and see her as a leader that we needed.”

Tickets to the launch party are available in advance at Buffalo Street Books, and will also be sold at the door for $10.