On March 2, senior Allie Panara, an attacker for the women’s lacrosse team, entered the offensive zone against SUNY Cortland. With the ball safe within the netting of her stick and a Cortland defender applying pressure, Panara analyzed how she matched up against her defender, as well as if any of her teammates were open and whether or not a scoring chance was available.

Panara must think on the fly, as she is responsible for deciding for her teammates if they should try to score a goal at that very moment or try to keep the ball on the perimeter and wear out their opponents before making a break to the net. As one of the attackers on the team, Panara is known to control the offense from the top of the zone and serves as the main playmaker for the Blue and Gold.

Panara has the resume to hold this responsibility. She led the women’s lacrosse team in points during her junior season, registering 91 points. Fifty two of her points were directly off of assists, leading the Blue and Gold as well as the Liberty League as a whole. She was named as the 2018 Liberty League Co-Offensive Player of the Year and was named to the Intercollegiate Women’s Lacrosse Coaches Association All-Empire Region First Team. She has amassed over 200 points in her collegiate career and has also scored over 100 goals. She has also started in every single contest since the start of her freshman season.

While Panara has been able to hit triple digits in the career goal category, she said that she would not characterize herself as a huge goal–scorer. She said she is more of a playmaker and excels by playing with talented teammates.

“I don’t think I would be where I am today without my teammates,” Panara said. “I work off of others — a lot of my points come from assists. I can’t get points if my teammate isn’t able to finish the pass I’ve given them.”

Panara said she has been able to develop strong chemistry with her fellow offensive players, even to the point that they are able to communicate more than just verbally. She said they are able to anticipate where they will be on the field through nonverbal cues.

“I like playing with players that can communicate,” Panara said. “I like players who are willing to work with you and want to figure out the ways that are best to beat their opponent. I’ve gotten so comfortable with some of my teammates — to the point where we know what the others are thinking — which is really fun.”

Panara attended Pittsford Sutherland High School in Pittsford, New York, where she was a varsity athlete in both basketball and lacrosse. She didn’t begin participating in lacrosse until she was in sixth grade when she made the switch from baseball after being the last girl in her little league. Panara said her decision to switch to lacrosse as opposed to softball had to do with social reasons as well as an aversion to being hit by pitches.

“People kept hitting me when they were pitching,” Panara said. “I had to call it then — I didn’t want to get hit anymore. A lot of my friends were playing lacrosse, so I made that transition and never looked back.”

Panara was the starting point guard on her varsity basketball team at Pittsford Sutherland and led her team to a state championship during her junior season. She said her style of play on the basketball court helped shape her on the lacrosse field as well.

“I was the point guard on my basketball team,” Panara said. “I feel like sometimes I am the point guard on the lacrosse field, offensively. I direct which plays are being run and communicate with my teammates. The other thing that translated from basketball to lacrosse is how I wasn’t a huge scorer but led the team in assists.” 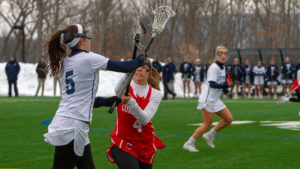 Senior captain Allie Panara makes a pass during the team’s game against SUNY Cortland on March 2. Panara’s field vision has brought her recognition in the Liberty League.

“I think she sees the game a few steps ahead,” Moore said. “It allows her to create offense for other people. She has really great field vision and is able to see the play as it develops. She is able to get people the ball.”

Panara is a second-year captain for the South Hill squad, having served as the offensive perspective last year while the other captains were defenders and a starting goalie. Moore said that having a returning captain is beneficial in trusting the team’s leadership.

“She has been a really great leader for us and has an enormous amount of trust from her teammates,” Moore said. “I think it’s always nice when you have confidence in your leadership.”

Junior attacker Bailey Herr has been able to develop into a dominant scorer alongside Panara. Herr was second on the team in goals last season with 46 and was named a 2018 All-Liberty League Honorable Mention. Herr said that Panara’s playmaking ability has allowed her to gain prime scoring opportunities.

“Allie and I have become very compatible,” Herr said. “We have played together for three years now, and it has helped us to establish a strong bond and understanding of each other’s strengths and weaknesses. I feel that we connect really well on the field — we have become so used to playing with each other that we can sort of predict what each other is going to do.”

Herr said Panara’s dedication is one of the best aspects of her game and helps motivate her teammates to do the best they can every day.

“It is hard to key in on what Allie’s best attribute is, but I think her passion and knowledge for lacrosse separates her from many other players,” Herr said. “She loves the game, and it is shown every day she shows up to practice and games.”

Panara said she hopes to use her leadership experience to help her team finally win a league championship. In her three previous years, the Bombers have lost in the league finals.

“Our biggest goal is to win a Liberty League championship,” Panara said. “I will do everything that I possibly can to help us get to that point. At this time, I think that my team mostly needs my composure on offense.”