Assistant coach teaches game based on lessons of his ancestors 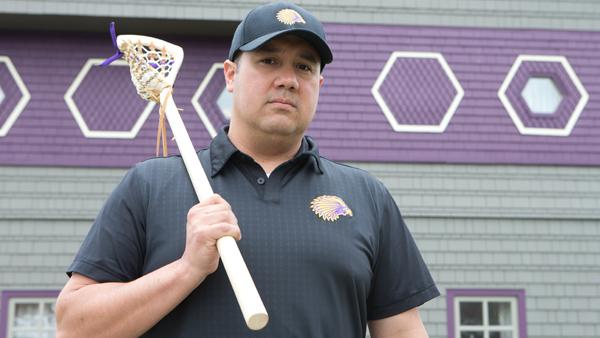 Ansley Jemison surveys the field from the sidelines of Higgins Stadium with his thick arms crossed and his brown eyes focused. Looking over the Bomber defense he notices a player out of position. He puffs on his whistle and the echo freezes all of the players in place. He calmly walks over to the defender and instead of barking orders to him he simply asks what happened. Jemison listens, never interrupting the player, before pointing out where he made a mistake and explains how to correct the error. Jemison, currently an assistant coach for the men’s lacrosse team, has always been very close to the game that was created by his ancestors.

“I’ve had a stick in my hand since I’ve been able to walk,” he said. “It’s been a huge part of my life, and it was something that was a part of my identity for a lot of years, and it still is I guess to this day.”

As a young boy in the Seneca Wolf Clan, Jemison stepped out onto the field for the first time with a stick in his hand and the smell of grass in his nose. He joined the older boys of the clan to participate in a game that has been part of their heritage for generations. His membership in this new brotherhood was quickly tested as the older boys dealt out a few initiation checks. While at the time he was scattered with black and blue bruises, he looks back on that day with happy memories.

Lacrosse has played a significant role in the community and religious life of Iroquois tribes for centuries. It is seen not as a sport but as a game given to their people by a higher power known as the Creator. Native American legend has it that lacrosse fulfills several roles in their culture. Jemison said he was taught that the game was used as entertainment for the Creator, as a healer for the body and spirit and a teaching tool.

“In our mind, it’s not really a sport, it’s actually a game that was given to us by the Creator,” he said. “It was something that was used as a medicine and as a healer, but it was also something for our young men to develop themselves as people. That’s really where a lot of the teachings come in.”

Jemison said games can be performed in honor of the sick. The harder the players play, the greater the healing effect. Native American lore also depicts those who partake in lacrosse as warriors, with the goal of bringing glory and honor to themselves and their tribes.

Lacrosse has always been a central part of Jemison’s identity. Born in Buffalo, N.Y., Jemison lived with his aunt on the Allegany Reservation, located in Cattagaraus County, and spent time with his mother in Brooklyn. During his high school years, he resided in Ganondagan, a National Historic Landmark, with his father Daniel.

He played attack for four years at Syracuse University, where his team was runner-up to the NCAA Division I National Championship in 1999. After he graduated that same year, he moved on to coaching. In the summer of 2012, he was a coach and assistant manager for the Under 19 Iroquois Nationals World Team, a team that competed internationally in the Under 19 National Tournament in Turku, Finland. He now works at Cornell University as part of their American Indian Program and also has his volunteer position with the Blue and Gold. Prior to that, he was the defensive coordinator for St. John Fisher College.

Jemison said his nearly lifelong involvement with lacrosse as a Native American has caused him to develop a respect for the game beyond the athletic competition.

“We are the originators of the game,” Jemison said. “It’s certainly a sense of pride that we take when we play, but it’s not about winning at all costs. There is a certain level of respect that needs to be paid to the game. It’s not so much just an NCAA sanctioned sport. It’s got deeper roots and deeper meanings.”

After joining the staff of the U19 squad, Jemison helped them win a Bronze medal in the tournament. Jemison said the experience was a great way to prove that Native American culture is still going strong and that even a smaller team like theirs could compete with anyone.

“Representing a smaller population in the tournament, we were able to knock off team USA in the round-robin stage,” Jemison said. “That was a monumental win for us.”

Even though they didn’t end up winning the gold, Jemison said the experience was a great lesson for the players.

“There are teachings and lessons that come from successes and failures,” Jemison said. “That is a lot of how I try to translate my game now in terms of coaching. Focus and attention to detail is something that helps with success, but failures and things like that are also part of the game, part of reality and a part of life.”

Jemison said he is glad he can express his heritage through coaching. He said lacrosse serves as an outlet in a society that often forgets about the relevance of Native American culture.

“The books say we’re a dominated people, we’ve been stuck on reservations, and you hear the story of the drunken Indian and things like that,” he said. “With the team, that’s a time where we can actually shine, and we can be at our best. We can settle our disputes on the playing field and show that we are a vital people.”

After returning from the Championships in Finland in August of 2012, Jemison focused on his new position as an assistant coach for the Ithaca Men’s Lacrosse squad. Head Coach Jeff Long said he was familiar with Jemison from their time facing each other on the field when he coached St. John Fisher. Long recognized Jemison’s respect for the game and how his background as a player and coach make him a great addition to the men’s squad.

“He comes from a great lacrosse background, and for him it’s not just a game, but a way of life,” Long said.

While coaching is a part-time commitment and his full-time job is at Cornell University, Jemison said it is imperative for him to give back to other Native American students who are fortunate to get an education at Cornell. He said he is glad he can also work as a residence hall director for Akwe:kon, a part of their American Indian Program. The program was established in 1975 to provide educational, social and cultural opportunities to Native students.

“Ansley has been playing a pretty big part on Native Americans going off to college and also influencing younger students to start considering college at a young age. He is a good man, and I respect him a lot.”

Jemison said he has a son on the way and that he hopes to pass on the same traditions and values that he has learned from lacrosse.

“Hopefully he is a young healthy boy so I will be able to put a stick in his hand,” he said. “The cycle will continue.”