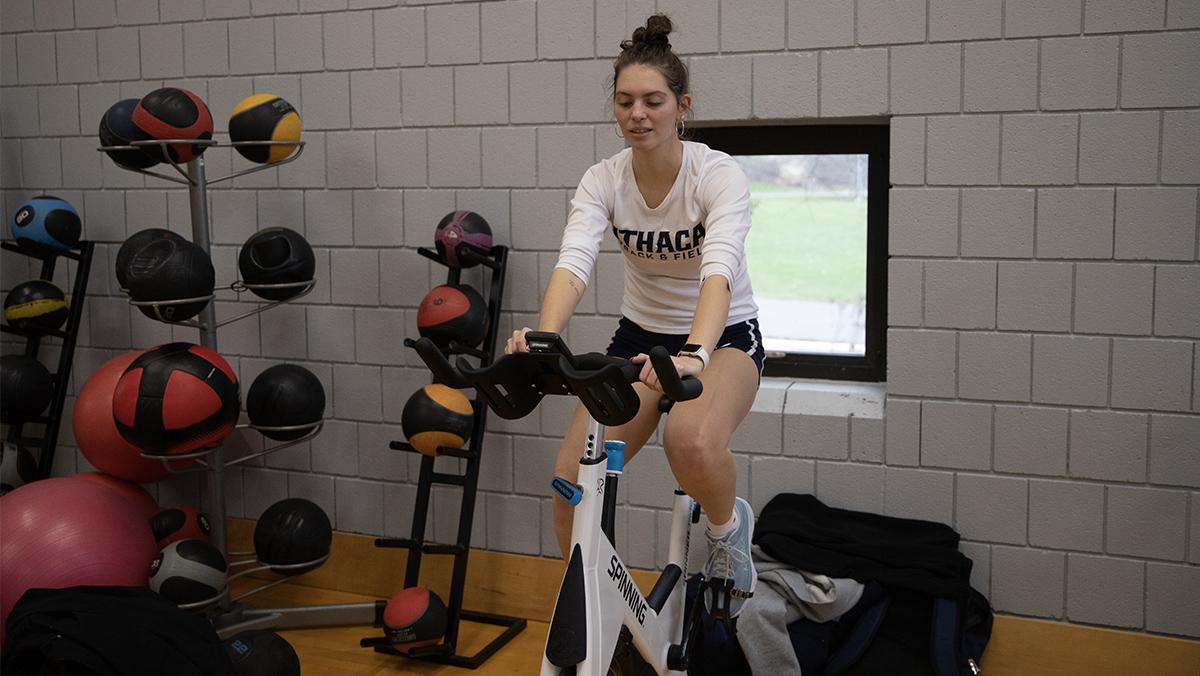 Maddy Tanzman/The Ithacan
Junior track and field athlete Isabella Lambert said she has to find alternative training methods during winter break because it can be too cold outside to run.
By Emma Kersting — Staff Writer
Published: November 30, 2022

It is the most wonderful time of the year, but it interrupts winter sports seasons. Before Ithaca College athletes settle into their holiday plans, they need to consider how they will stay in shape before their return to campus and keep the season from slipping away during a hiatus.

Many coaches at the college give their athletes a recommended set of workouts to complete during the Thanksgiving and winter breaks that take place in the middle of the winter season, which lasts from November to March. For most members of the campus community, winter break lasts over a month — from Dec. 14 until Jan. 23 — while Thanksgiving break lasts 10 days at the end of November.

During previous Thanksgiving breaks, Markwardt used to keep his athletes on campus until the Wednesday before the holiday, but it is now optional for the swimmers to stay. Markwardt said some of his athletes stay until Wednesday if they do not have a place at home to train and some return on Friday to continue their training.

“We’re about halfway through our season [when breaks come],” Markwardt said. “If we took a week off, it would be a disaster. One of our biggest meets is [Dec. 2–4] … but we kind of use [Thanksgiving Break] as a rest period.”

As a coach, Markwardt said it can be very obvious how much athletes train when they are away from campus. He said it is important for the athletes to be honest with the coaches when they are asked how much they trained over break.

“If we see that they’re having trouble keeping up, we have to adjust their workouts,” Markwardt said. “We don’t want people getting injured, we don’t want to overtrain them.”

“It’s eat, sleep, swim for that period,” Markwardt said. “It’s a great opportunity because they don’t have school.”

“It can be challenging when you have a long semester; you’re very tired but you don’t want to lose everything you’ve worked really hard for, [so] it keeps a lot of us motivated,” O’Brien said.

O’Brien said that during breaks, her coaches suggest workout plans and training goals, from the weight room to the pool, but it is up to her to actually do them.

“It’s really important to stay in shape,” O’Brien said. “Most of us are lucky enough to have facilities to swim in and train in at home.”

Practices and workouts are optional for the swimming and diving team during finals week. The day after finals end, the teams go to Florida for training. This excursion to Florida is a yearly occurrence for the team, where the athletes spend a few days between the end of finals and returning to campus, usually two days before Christmas. The athletes have to pay their way to Florida, but the team fundraises in preparation.

The swim and dive teams are not the only ones that split up their season. Junior track and field athlete Isabella Lambert said that during the regular season, the team practices every weekday and goes to lift sessions twice a week. But during breaks, Lambert said she has to find alternatives to stay in shape.

“It’s too cold to run outside on a track over the winter break, so I mostly do biking and weights,” Lambert said.

Lambert said the track and field coaching staff also recommends workouts to the team and gives multiple alternatives based on what the athletes have access to. She said the coaches refer to the break as a maintenance period because the athletes are maintaining the skills they have but are not getting stronger.

Lambert said she stays motivated during the breaks by sharing her workouts with her friends and teammates online through apps like the Apple Watch fitness app, which helps them hold each other accountable. However, she said the breaks do feel like the season is being dragged to a halt.

“[The break] kind of interrupts the progress we’ve made in the season,” Lambert said. “We’ve been working together since August.”

Markwardt said he has no control of the work his athletes do over the breaks. He said some athletes are very dedicated to their exercises and have a facility to train in while others do not train very much at all over the break, taking the time away from campus as a mental break.

“You can tell them what they need to do, what you’d like them to do, but it’s all on them,” Markwardt said.

Women’s track and field team launching toward another conference title