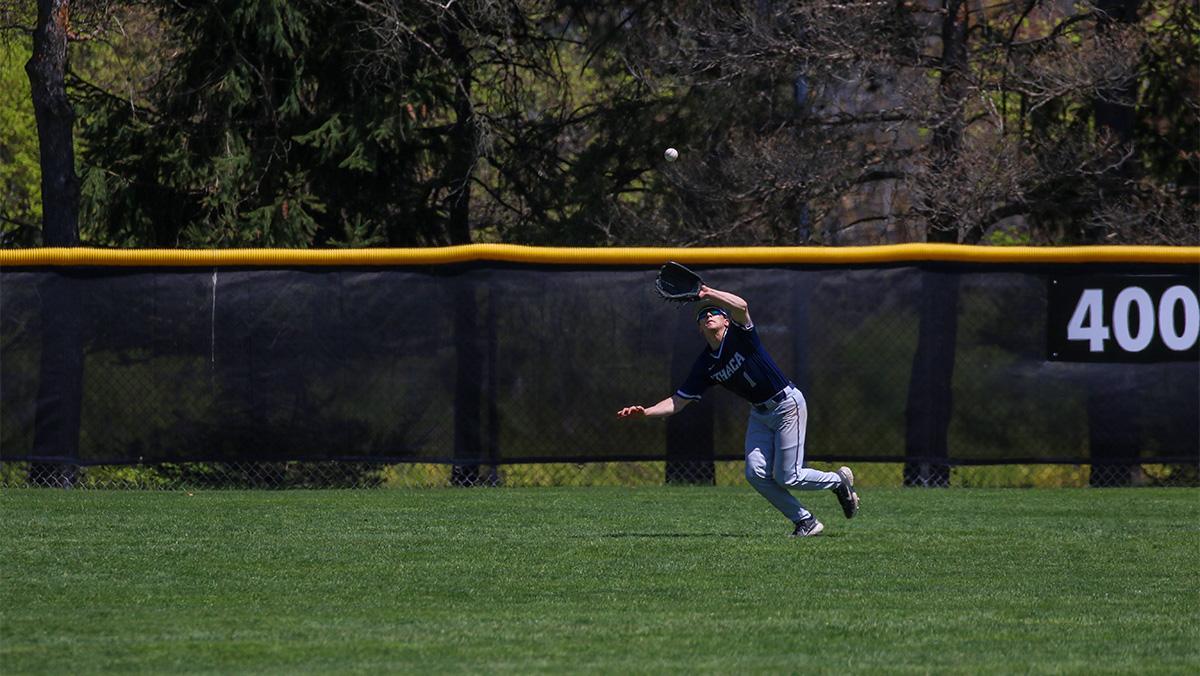 Malik Clement/The Ithacan
Junior outfielder Mike Nauta makes a catch in center field. The Bombers defeated the University of Rochester 8–7 in 10 innings May 13 to advance to the Liberty League Championship game.
By David Schurter — Staff Writer
Published: May 15, 2022

The Bombers get the chance to play in the Liberty League Championship game for the first time. If they win, it would be the Ithaca College baseball program’s first Liberty League title after coming over from the Empire 8 Conference after the 2019 season.

Following Ithaca College’s 7–5 win over Clarkson University on May 12, the Bombers got off to a hot start again, taking a 2–0 lead in the first inning on a two-run double by senior infielder Buzz Shirley. Three innings later, the Bombers would tack on two more runs to lead 4–0 on two singles by junior infielder Matt Fabian and sophomore infielder Ethan Rothstein.

In the top of the fifth inning, the University of Rochester Yellowjackets came storming back to tie the game 4–4 on four consecutive singles leading to the first two runs. Sophomore pitcher Nate Scott, who started for the Bombers, was taken out of the game following those singles. A two-run double would eventually knot the score at four.

The Bombers responded in the bottom of the sixth when junior infielder Mike Nauta singled in Rothstein. A walk followed Nauta’s at bat and then Shirley hit another two-run double, adding to the Bombers lead to make it 7–4.

The Yellowjackets would not go quietly as they scored two runs in the top of the eighth on two singles to make it a one–run game. After the Bombers failed to score in the bottom half of the inning, the Yellowjackets went on to tie the game in the ninth on an RBI triple to right field, but the go-ahead run was thrown out at the plate by Fabian.

In the bottom of the ninth, the South Hill squad got two outs fast. However, the college started to rally after a Fabian double and walks by junior catcher Gil Merod and Rothstein. With the bases loaded and two outs, freshman infielder Riley Brawdy had the chance to walk it off and sent a shot into deep left. Unfortunately for the Bombers, it was caught on a diving play by the left fielder to send the game into extra innings.

The Yellowjackets once again could not get much going. They earned a baserunner with one out but could not advance him, so the game went to the bottom of the 10th to give the Bombers another chance to walk it off. This time, the college wasted no time getting the bases loaded, with all of the first three batters reaching base. Freshman infielder Nick Cutaia got to play the hero for the college, sending a grounder just past third base to earn an 8–7 victory for the Bombers.

The win sends the college to the Liberty League Championship Game to be played at 10 a.m. Saturday, May 14 against the winner of the University of Rochester versus Clarkson University game at 4:30 p.m. May 13.