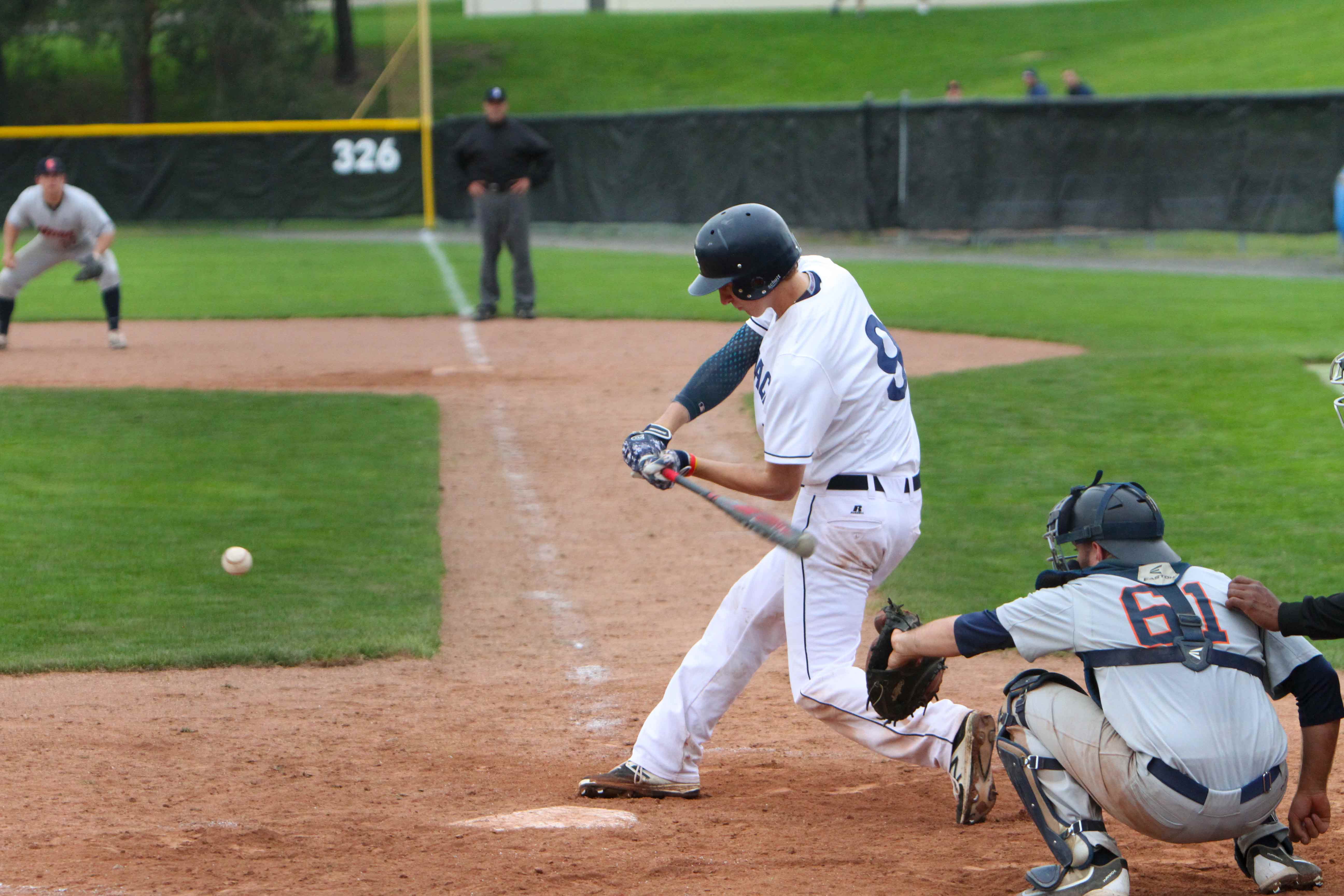 MAXINE HANSFORD/THE ITHACAN
Sophomore outfielder Sam Little swinging at the pitch in the Bombers' doubleheader against Utica College at Freeman Field. The team defeated the Pioneers 14–1 and 8–1.
By Jeb Biggart, Samantha Cavalli — Staff Writer and Assistant Sports Editor
Published: May 3, 2017

The Ithaca College baseball team went two for three for the weekend against Utica College. The Bombers swept the Pioneers on April 29 in a doubleheader and lost April 30 at Freeman Field.

In game one April 29, the Bombers defeated the Pioneers 14–1.

In the top of the second inning, the Pioneers’ lead-off batter reached first base on an infield single, moved up to second base after a defensive error by the Bombers and moved over to third base on a groundout. Utica scored its first run on a sacrifice fly and took the lead 1–0.

In the bottom half of the second inning, the Bombers scored six runs. Sophomore outfielder Sam Little hit a double and scored on a single from senior catcher Ryan Henchey.

After a hit by pitch to sophomore pitcher Andrew Bailey, junior outfielder Domenic Boresta hit a single that allowed Henchey to score. Sophomore outfielder Matt Carey followed with a single to allow Bailey to score.

The Bombers scored three more runs in the bottom of the third inning, making their lead 9–1. Bailey scored the first run on a sacrifice fly from Carey, and the other two runs came from an infield single by Webb Little.

In the bottom of the fourth inning, Sam Little hit a solo home run. Sophomore catcher Adam Gallagher hit a double to put the Bombers up 12–1. Two more runs scored for the Blue and Gold from wild pitches to make the score 14–1.

In game two of the doubleheader, the Bombers were victorious again, defeating the Pioneers 8–1.

The Blue and Gold had a sacrifice fly from Carey that allowed Bailey to score and gave the Bombers a 1–0 lead in the second inning.

Utica tied the game in the third inning with a solo home run, but the Bombers responded later in the inning. Webb Little hit a triple to right and scored after a single by Thompson.

The South Hill squad scored two more runs in the fourth inning to lead 4–1. Carey led off with a double and Savacool followed with another double. Thompson hit a single to bring in Savacool to score but was thrown out at second base.

In the bottom of the fifth inning, Savacool hit a two-run single that scored Bailey and Boresta, who both reached on base hits of their own.

Boresta drove in the Bombers’ seventh run of the game with a sacrifice fly in the sixth inning, allowing Sam Little to score. The final run of the game was scored on a double from Thompson in the seventh inning.

On April 30, baseball team suffered a 12-6 loss at the hands of Utica College at Freeman Field. The Bombers were unable to come out on top, despite it being Senior Day for the team.

The Bombers took an early lead as Savacool began his day with a double. He then stole third base, putting him in prime scoring position. Webb Little hit a sacrifice fly, driving in Savacool, putting the Bombers up 1–0 early in the first inning.

Utica responded with a strong third inning, driving in three runs with a base-clearing double, making the score 3–1.

In the bottom of the fifth inning, the Bombers started scoring again, batting in two runs, making the score 6–4.

The Pioneers started the sixth inning with a leadoff double and a base hit, making the score 7–4. In the seventh, they brought in four more runs to bring their lead to 11–4. The Pioneers batted in one more run in the top of the ninth inning to make the score 12–4.

The Bombers were able to add two more runs in the bottom of the ninth inning after Thompson hit a two-run home run, but that wouldn’t be enough to come back and beat the Pioneers.

The Bombers’ next game will be held at 4 p.m. May 3 at St. Lawrence University in Canton, New York.