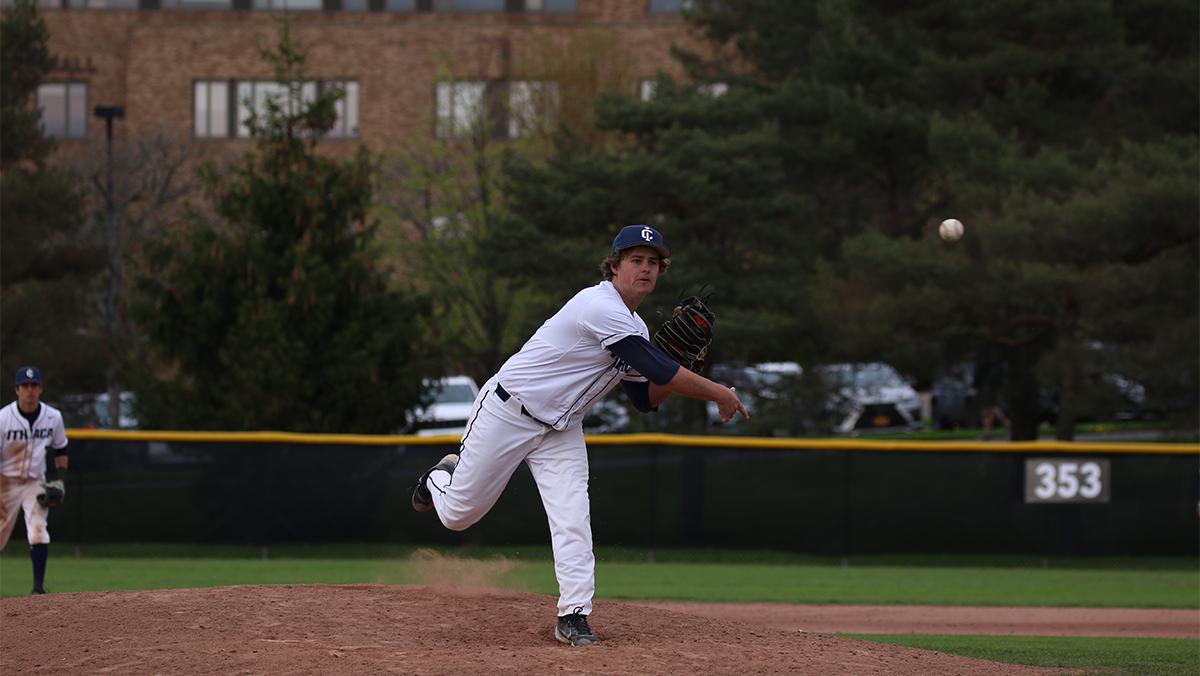 Nolan Saunders/The Ithacan
Sophomore pitcher Nate Scott threw a complete game for the Bombers in game two of the Liberty League Crossover Series, helping the college to a 7–3 win.
By Dustin Terry — Staff Writer
Published: May 9, 2022

With postseasons underway for Ithaca College’s spring sports, the baseball team faced Union College in the Liberty League Crossover in a best-of-three series over the weekend of May 7–9. The first two games were played Saturday, May 7, and the Bombers found itself fighting its spot in the Liberty League Tournament after losing the first game by a score of 5–2 and winning the second 7–3.

The Union College Dutchmen got an early lead in the top of the first in game one, scoring on a wild pitch. But when the Bombers came up to bat, junior infielder Mike Nauta and sophomore infielder Louis Fabbo hit back-to-back singles to lead off. Nauta scored on a groundout and Fabbo scored on an RBI single by freshman infielder Connor Pedersen for a quick 2–1 lead.

The Dutchmen regained the lead in the third inning, scoring three runs. After an RBI double with one out tied the game, the Dutchmen loaded the bases and earned two walks to take a 4–2 lead.

The Bombers put runners on first and second with two outs in the bottom of the inning, but a line drive by freshman first baseman Nicholas Cutaia was caught by the centerfielder.

The fourth and fifth innings went by quickly as both teams went scoreless. The Dutchmen added another run in the sixth inning on an RBI single to right-center field, but the Bombers could not make anything happen despite getting runners to first and second from a double by junior catcher Gil Merod and a walk by junior outfielder David Cifonelli. Another line drive by freshman infielder Riley Brawdy was caught by the centerfielder.

Junior pitcher Matt Chase replaced senior pitcher Kyle Lambert after six innings of work on the mound. The Bombers got runners to second with two outs in each of the seventh and eighth innings, but a fly-out and line-out ended the innings.

Senior infielder Buzz Shirley and Fabbo each reached base with one out in the bottom of the ninth, but the Dutchmen got a strikeout and a groundout to seal their game one victory. The pressure was on for the Bombers as game two became a must-win to keep their season alive.

The Dutchmen put the pressure on early, scoring two runs in the first frame. The first batter was hit by a pitch and brought home on a double to right-center field. Sophomore pitcher Nate Scott struck out two batters with a runner on second, but a line drive to left field scored their second run of the game.

The Bombers quickly flipped the ballgame around, scoring seven runs in the bottom of the first. With the bases loaded from single, double and a hit-by-pitch, Cutaia hit a sacrifice fly to left field to score Nauta. With the bases loaded again, junior infielder Matt Fabian walked to tie the game 2–2. Shirley and Merod both advanced to home on passed balls, giving the Bombers a 4–2 lead.

The Bombers extended their first-inning lead to three runs with Brawdy reaching on an error, bringing home Fabian. Nauta laid down a bunt single in his second at-bat of the inning, scoring two runs after an errant throw to first base.

Scott added four more strikeouts over the next three innings, but the Dutchmen earned a run back with an RBI single in the top of the third to make it a 7–3 ballgame. The Bombers got a runner to second base in both the third and fourth innings but could not get them across home plate.

Scott continued to pitch well into the fifth and sixth innings as the Dutchmen struggled to get anything going at the plate. Scott made quick work of the seventh inning, earning strikeout numbers seven and eight, earning the game two win.

The Bombers made a quick turnaround in game two and the series to keep their season alive after dropping game one earlier in the day. The winner of game three on Sunday, May 8 will advance to the Liberty League Tournament during May 12–14.

Students and faculty work together to conduct research studies